Write your own review for Yellowstone Season 1
Movie Review Co-ordinator
The Best Blu-ray and Movie Resource AVForums Movie Reviews Bookmark it now!
My opinions expressed here are not necessarily those of the AV Forums or the associated websites

I've seen all 3 seasons, what a fantastic show!! Cant wait for S4, thanks for the review cas was a good read .
LG55CXOLED - PANASONIC UB820 - PLAYSTATION 5

Everywhere, but you have to buy it. Although that's better than not being able to get it at all, which has been the case for the last 3 years.
Movie Review Co-ordinator
The Best Blu-ray and Movie Resource AVForums Movie Reviews Bookmark it now!
My opinions expressed here are not necessarily those of the AV Forums or the associated websites
M

Never seen any of this.. BUT having seen the brilliant 'LET HIM GO' (with Costner and Diane Lane) recently... I will give it a go

Bought it on Amazon a while ago but only because the cost of the US blu ray was a bit pricey. Only seen series 1 so far. Really good.
S

One the best shows around, I must watch show if there ever was.
D

I enjoyed this but it is a slow burn for sure, still not 100% if I finished series 3.

Great show. Lacking in overall story arc, as events seem to follow each other like in 90s Santa-Barbara, but all other aspects (acting, casting, script, cinematograph etc) are truly great - so a solid 8.5 from me, and I am eagerly waiting for Season 4.

Finally...a great series worth reviewing. It's also an eye-opening companion to Wind River and Hell or High Water. Sheridan has a number of new series coming, too, including a prequal to Yellowstone, and I expect all of them will maintain his high standard of writing.
Last edited: Mar 3, 2021

I think it’s a more adult more gritty, modern-day Dallas. Not to dis-service the far superior acting/writing production at all, it’s just the ‘feels’ I get watching it.

I was aware of this via looking up Taylor Sheridan on IMDb, following watching Wind River which is probably a key ‘influencer’ of this series with themes and even actors making the switch.

I saw the first series on Sky’s Paramount channel but only in SD and the PQ was awful. I gather there is now a Paramount HD and they recently showed S2. I’m now starting S3 on Peacock via US VPN having blitzed S2 on it last week.
JVC N7 PJ,ReactII 104" Screen,Lumagen Radiance Pro,Pannny 65EZ952 OLED,Panny UB9000 UHD Player,7.2.4 Atmos,Yamaha 3070 Receiver,Rotel RMB-1575 Amp,Kef R700,R600c(Fronts),R400b(Subs),R500(Surrounds),Ci200RR-THX(Heights),SkyQ,XBoxOneX,Nintendo Switch,PS4Pro,Ryzen MPC,Dune4K,Apple4K,Harmony Elite,Oculus Rift VR Rig
C

Thanks, Cas!
Twas about time we had a review for this one

A really great series not complying with the current trends in TV and films... I find it refreshing!
Almost every episode will have a quotable line if one's in the mood to stick it to the man

Will be interesting to hear your thoughts on the other two seasons... Beth and Rip get more development. I mentioned it in another thread but over the three seasons they've grown to be some of my all-time favourite characters from TV shows.
Not that Costner isn't great, he gets to do his favourite part over and over again

PS- It was fun to find out Taylor Sheridan had his own cameos in a few episodes.
G

I thought this show was going to be an upgrade of that other Western soap called Dallas with J.R. Ewing and Bobby Ewing, but Kevin Coster has put his own personality into this show, he effortlessly portrays the hard line patriarch with an eye not just on his own family legacy but also the land owning community he believes in as well.
The ruthlessness of John Dutton and the lengths he will go to get what he wants is part of the broader attraction of watching this show, in my opinion Costner's John Dutton is the glue that holds the whole series together though the supporting cast does a good job as well, especially Gil Birmingham as Chief Thomas Rainwater, his battle of will with Dutton works well on screen, as does Dutton's personality clashes with his son's and daughter whom he manipulates shamelessly.
Cole Hauser's retro cowboy is a throwback to the sixties and fits in well.
There are many story threads working in this series, especially with Beth and Kayce Dutton, the first season of Yellowstone highlighted both their dysfunctional stories the best.
Season 2 added to some unfinished business but as a viewer I felt the opening dramatic strength of season 1 of Yellowstone had waned somewhat, it was steadily drifting into formulaic melodrama territory by season 3, but with Kevin still the star it was watchable melodrama non the less.

Kevin Costner stars as Josh Dutton, who owns the largest contiguous ranch in the United States whose borders are under constant attack by land developers, an Indian reservation, and America’s first… 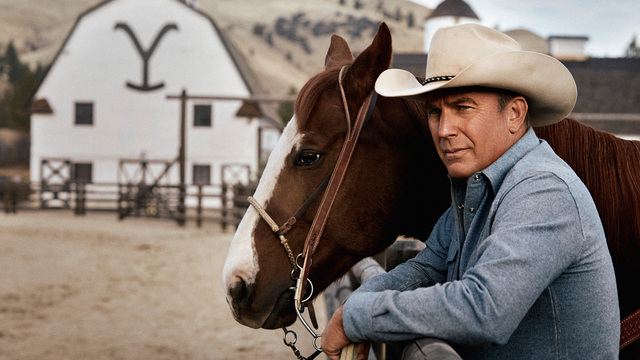 A family with a problematic history control America’s biggest ranch in this drama.

SteveAWOL said:
FWIW the first 2 seasons are shown on Paramount Network in UK

Kevin Costner stars as Josh Dutton, who owns the largest contiguous ranch in the United States whose borders are under constant attack by land developers, an Indian reservation, and America’s first…

A family with a problematic history control America’s biggest ranch in this drama.

Season One, such fond mammaries...with Kelly Reilly walking from her outdoor tub: nekkid as a balmy breeze. The landscape shots are engrossing too.
It's a great opening season that, perhaps, set the bar a little high for later on; as it fades a bit in proceeding series. Fortunately though, it hasn't paled too far and still has some fine episodes amongst its grandiosity of a theme within a burgeoning arc.
Last edited: Mar 5, 2021
You're acting like a snail on a wet Friday.

Well worth watching i thought its great i watched season 1,2 and 3 cant wait for 4
N

Started this a few days ago after reading the review. Finished season 1. Loved it. Some aspects from billions and succession i feel. Starting season 2 binge tonight! Cant wait.
Q Acoustic Concept 20 LCR, B&W M1 rears, Velodyne SPL800i, Denon X2300
You must log in or register to reply here.