Hi
I have a Yamaha RX-V2065, bought in the UK. The main remote control has died and I'm trying to source a replacement.

Anyone know how well the WS31730 US would work with my UK receiver?

Thanks!
Solution
The US remote would still operate the EU or UK modeles. It simply includes additional buttons associated withfunctions not onboard the UK models such as satellite radio.


I'd give you one for free, but you'd have to buy the RXV2065 it came with
Sort by date Sort by votes

If the buttonsare the same then the remotes are interchanfeable and should used the same IR commands.


I'm not even that sure that the US models had different remotes to those issued elsewhere, not unless the US remotes include additional buttons associated with satellite radio?

Also note that the Yamaha RAV296 remote is also suggested as being a replacement for the RX-V2065: 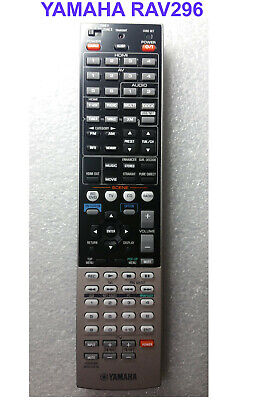 Find many great new & used options and get the best deals for Yamaha RAV296 Remote Control for RX-V2065 HTR-6295 WS31710 at the best online prices at eBay! Free delivery for many products!
www.ebay.co.uk

It looks like WS31710 US version has extra buttons & subtle differences to mine: extra SIRIUS & XM buttons, a RHAPSODY button, and additional functionality for MENU, FFWD and PREV/NEXT buttons. Nothing is missing.

The US remote would still operate the EU or UK modeles. It simply includes additional buttons associated withfunctions not onboard the UK models such as satellite radio.


I'd give you one for free, but you'd have to buy the RXV2065 it came with
Upvote 0
Solution
S

Received the RAV296 today, brand new & works a treat.
It'll be good to get a few more years out of this receiver
Upvote 0

Mine still works, but isn't in use and has been boxed up in storage for several years now. The only thing amiss is the fact that it's HDMI implimentation hasn't kept pace with the advancements that have occured. If only wanting support for 1080p and if not wanting Atmos or DTS:X though, it is a great sounding AVR. The supposed more up to date models I've subsequently had have been rather dissappointing in comparison to the V2065, especially in relation to the AVR's actual power and analogue amplification.
Upvote 0
You must log in or register to reply here.