If anyone is into Media Players or HTPC's etc. Might of stumbled on something like this or similar.


Today I will just post my First Impressions truthfully about "Xtreamer Pro".
Here is the official Website for the product.
Official Site Link
Main reason for getting this one in particular and instead of a HTPC is its simple little maintenance and takes up to 4TB (Unconfirmed on 6TB). Also Streams via PC's and its Other Product "Etrayz" which is a NAS Server/Webstorage.
The packaging of the Xtreamer is pretty simple. and carefully placed and with light foamalight so if it ships out it will not get damaged.


What you get in the Box (Defult with no HDD or Wifi Adapter). 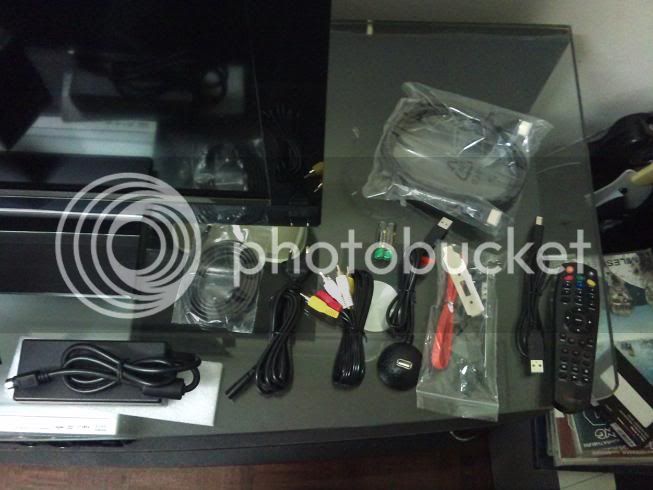 
As you can tell and See that it is more than what you would get out of most products you buy in stores. For Example The PlayStation 3 is a full HD Gaming and Bluray Device/Player yet comes with a Standard Composite Cable and not a HDMI or component Cable. 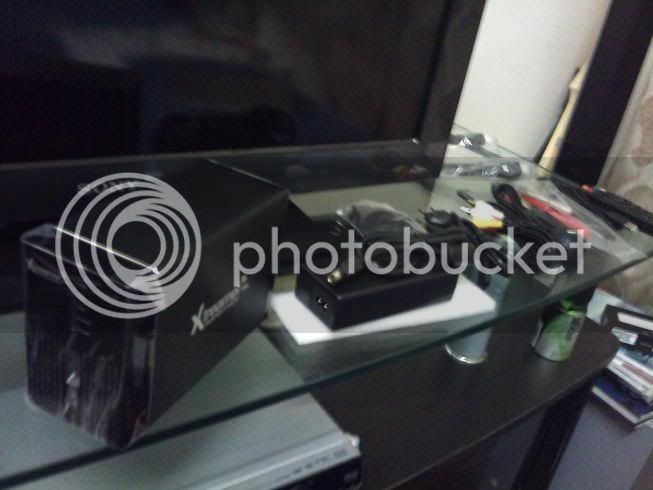 Setting up isnt hard. But taking the Front of the Xtreamer Bos off was easy... putting it back on was a slight mission for me. as I was scared to break it but alas it is pretty tough you would have to put some strength just to break it. locks easily as well. The Springs to keep the HDD's in place didn't help when closing it though. 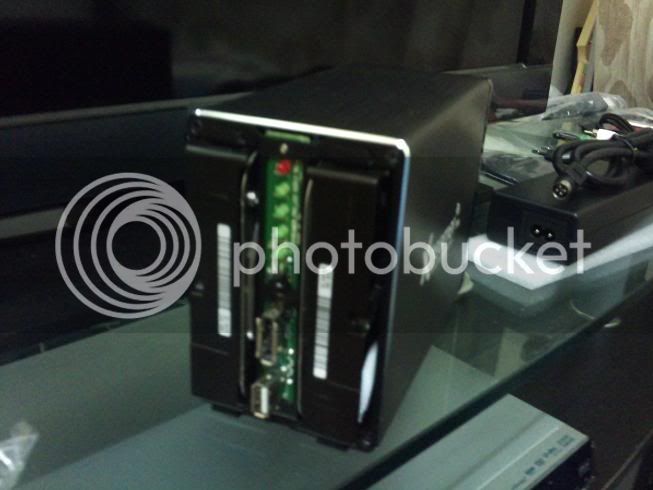 As you can see I put two Sata HDD's in.
One 2TB and one 320 gig (my 320 gig enclosure broke so using this).
Now thew Set up I used to for the Xtreamer Pro is the following.
Connected
HDMI to HDTV
Toslink Optical to Sound System (5.1 DTS)
LAN To Laptop (for internet connectivity sharing with a 3G dongle)
Power to wall (duh).
USB Slave to laptop (only when I need to transfer files otherwise plug it out).
and that is about it on that. Pretty simple but I at first thought the Toslink out was damaged as it was not very ...solid to plug in but turns out it was im just used to other devices. there is enough space for all those at the back without cluttering the fan in fact plenty of space.
The HDMI to the HDTV worked perfectly fine on the first go. Setting it up in settings to get 1080p was simple enough. the Device can get up to HDMI 1.3a which fun enough they give you this cable. You can play sound via your HDMI or RCA or even like me Toslink Optical out. I prefer the toslink for digital out to get DTS etc but if your sound system takes HDMI do it from there if the cable is sufficient for you.
The remote is fairly simple to use. Although feels small but its the same size as my Sound Systems remote (Phillips). and it was designed for comfort as I noticed with a trigger like grip underneath for my finger to hold the remote with ease. the buttons are a little to get used to as I find the buttons small. 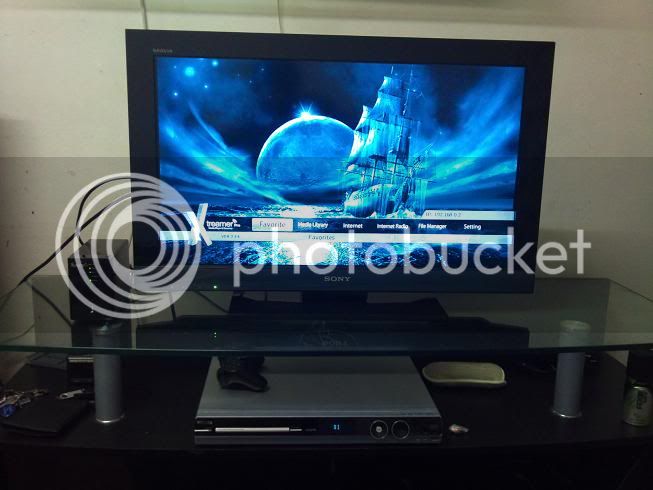 Pretty nice actually. The Menu also displays in 1080p ALTHOUGH the Boot page is in 480p and its jaggered so if you see that do not worry.. It was most likely a image they used at a specific resolution and didn't think about a 1920x1080 resolution for the boot start. which is fine as that last a few seconds. As I know you can add different skins to your Xtreamer and Wallpapers as I plan on doing so later. but then make sure they the right resolution. 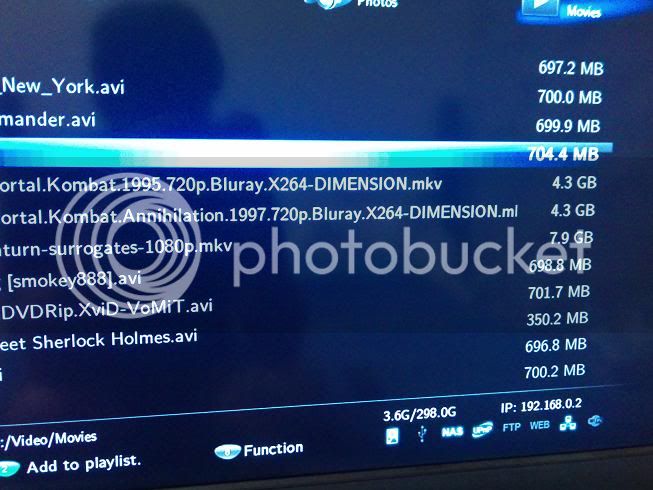 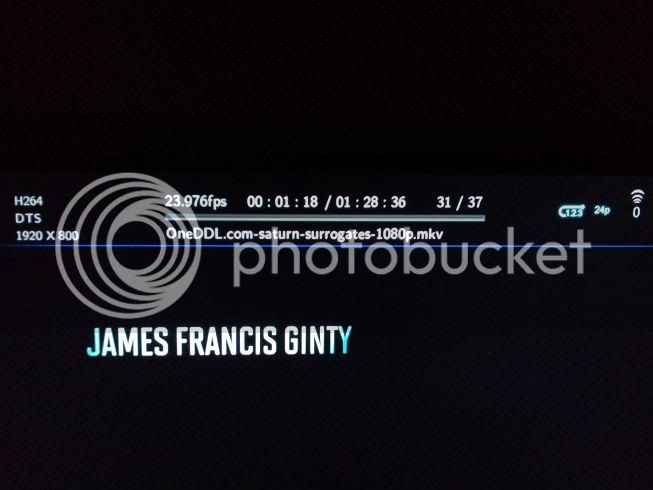 From what I noticed it ran smooth and played right after i hit enter. (few seconds maybe 2-4 to start). Picture above shows the info on the xtreamer (info button). it shows you the physical resolution of the film and what frames it is playing also if it is playing in 24fps and what sound codec and video codec is playing judging by the left corner. also with time and seeking.


Now according to my TV it is playing in 1080p and 24fps like any other Bluray that will play on this TV. 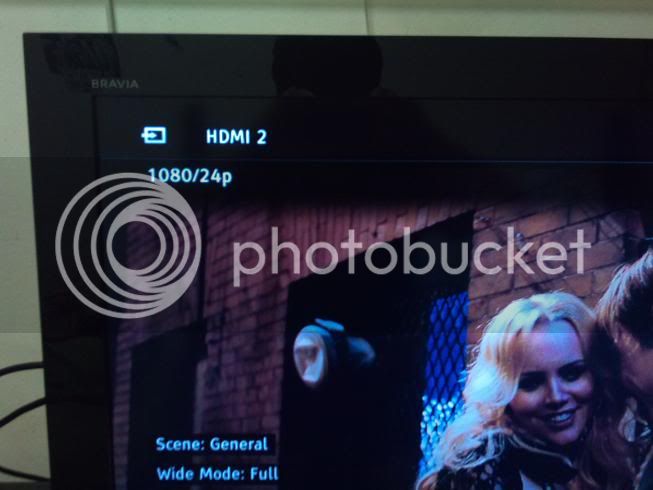 as you can see. and the picture isn't half bad either (even though its a rip).
and I can confirm it was doing DTS. 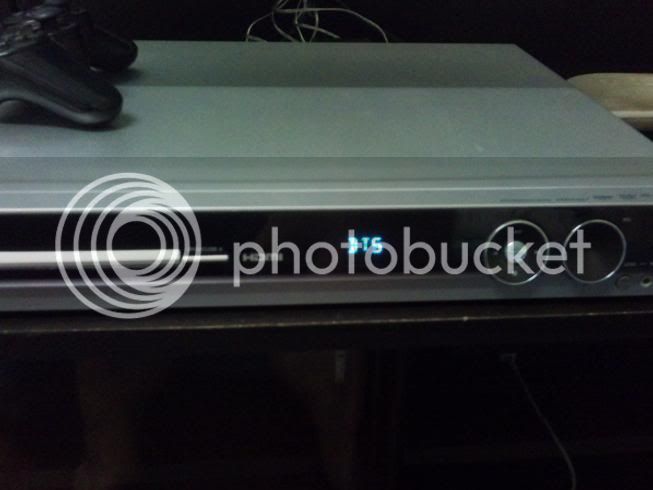 Now I do not have TrueHD Audio function on my Sound System but according to the box and Settings on the Xtreamer pro (ver 2.3.4 factory default). It does do this. up to 7.1 but with me as I only have 5.1 it did the job correctly.


The USB Slave cable they provided was and is way to short for anything. it is as short as a forearm so if your PC is that close to your Xtreamer sure okay. but if you got space and its about at least a meter away you will need another usb slave Cable or a extension cable to meet your length. I already had one and a better quality one from Cooler Master (my HDD enclosure). (pic Below). 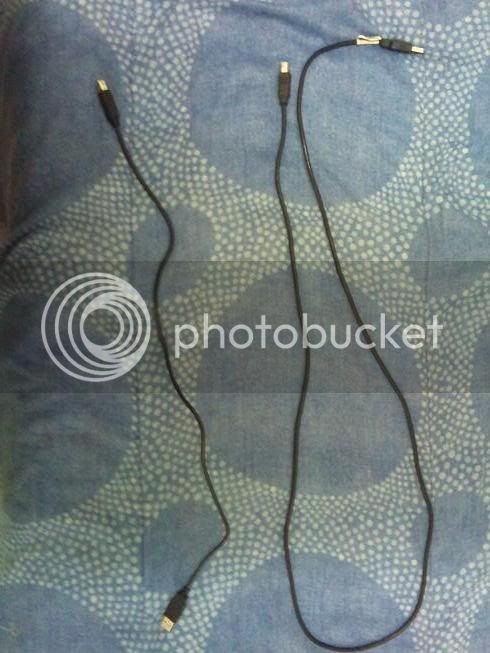 On that Note. if you Transfer files via USB Slave you cannot access your Xtreamer Pro... this is minor as I can do other things while i wait for things to copy over. just unplug the usb cable when you done and the Xtreamer will switch off afterwords simple standby mode.


Power Adapter cord too short (not the Power cord to the wall).
As you can see its also too short to reach the ground im comparing it to my HDD enclosure that was long enough in general. what you can Do is let it hang or move the Xtreamer Closer to the edge so it can lay down nicely. Its also minor. 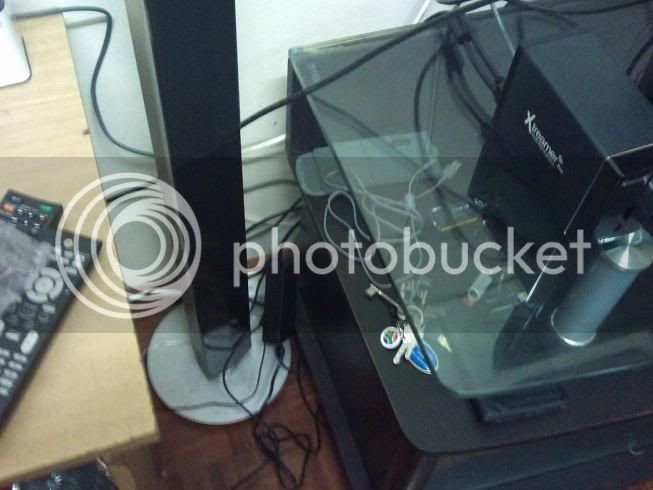 Another Disappointing factor and I think it was a bug on that version or my video (something) was when i was playing surrogates i cant stop it.. it stops and freezed .. but I could turn the xtreamer off via remote if i had the option to just turn it off. Not sure but the TV said unsupported Signal so it could of been that HDMI cable will check when i updated it to the latest firmware. but i could skip the vide with easy instead of stopping. :/ weird.


Updating the Xtreamer Pro
Now not the unit itself but their website. I googled for the update and got their official site and downloaded their update which was 2.5.4 it was a xtr file. and the unit couldn't pick it up at all. I then went to the forum to ask questions but remember there is a section for help on that specific product or other and i went to the updates section and noticed fewer updates and noticed the file type was different. Now this isn't stated on their website that this update is for THIS specific model. So if you come across this issue read this and get the update for your model/make.

What was Impressive.
Well there was many things I was impressed with especially after reading so many hateful things about this company because of MK1 owners bought something that they thought was future proof of false promises. I bought this based on what it can do now.
I love how fast the transferring files across the USB Slave works and how simple it is. It works like a External HDD Enclosure. just have the switch to which HDD you are going to work on.
What i found more impressive is that with windows and the xtreamer if you got it hooked up to your network. you can access it like a PC sharing a HDD and whats best about it is that you don't need the switch as you can acess both HDD's and a USB or a external from your PC over the network with ease. no need for the USB Slave really.
What I loved as well as it is playing anything I through at it. no hassle (apart from that one bug i mentioned).


Extra Bonus.
To my knowledge from reading around The Xtreamer Pro can take 2 Sata HDD's and only run one at a time you have to switch from drive A or B to use that HDD.... WRONG that switch is just for file transfer and you can use both HDD's in one go. 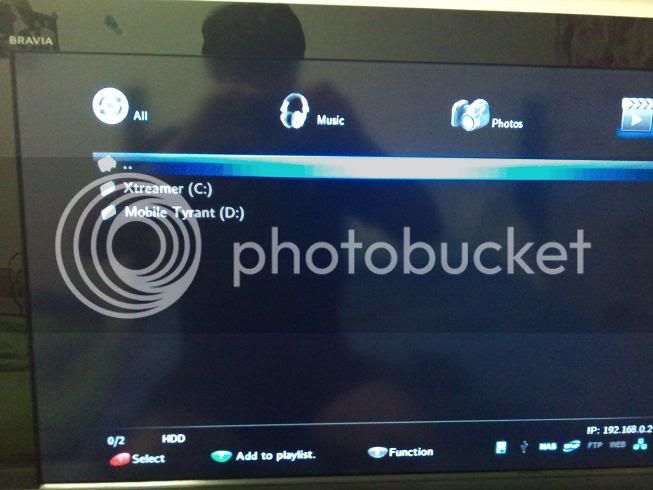 So its a bonus for me in future if i need more space as im using my 320gig (mobile Tyrant) as a External HDD.


Noise.
People said it was noisy... Wrong again its quiet even if the fan was set on high. I could barley hear it. my Laptop fan made more noise. and the HDD's are quiet could be my Western Digital's I know some HDD's are louder than others. so check your HDD etc.

This is my first impression really not really a Review of things that I want to do for youtube.. but don't have batteries atm don't want to use the phone.
Otherwise I am loving this thing. compared to a HTPC it saves you power and space. if you compare it tot he XBMC well the Jukebox is better but it relies on TMDB.org instead of IMDB but you can edit the information and upload posters and art yourself via the browser over the network. Still playing with it.


If i give it out of ten its a def 8.5/10 as nothing is perfect and had some headache with the update (the disappointing factors) yet when I updated things were faster and smoother so +1 but will do a official review in some time.

After updating from 2.3.4 to 2.5.4 the Freezing thing after playing that Surrogates movie stopped its working perfectly now and TrueHD Audio is working on my Bluray rip i made which is just a extraction from the disc m2ts file 23gigs and runs smoothly no hassle.