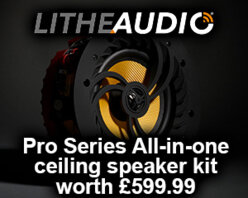 The Pro Series is an all-in-one wireless ceiling speaker system with amplifier built-in, it delivers high-resolution audio coupled with an unrivalled wireless and wired connectivity set. The Pro’s are available from Invision UK and priced from £599.99 for a pair.

Lithe Audio consistently puts itself on the cutting edge of product development with fresh introductions such as Wireless Sub woofers are all built to meet the challenges encountered in real world use case scenarios for consumers and installer.
Home cinema and gadget enthusiast, movie and TV fan, PC gamer and antitheist.
See the construction of the AVForums home cinema.
Ex software developer, professional drummer, biker and RCMA flier. Programming computers since 1979.
You must log in or register to reply here.