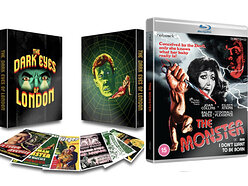 THE DARK EYES OF LONDON
THE MONSTER


ON BLU-RAY AND DVD 11 OCTOBER


To celebrate the release we are giving YOU the chance to win copies of both on Blu-ray.
​
For Halloween 2021, Network is proud to present two British horror classics resurrected in high-definition for the first time ever: Edgar Wallace adaptation The Dark Eyes of London (1939) starring terror icon Bela Lugosi, and exploitation shocker The Monster (1975) directed by Hammer stalwart Peter Sasdy and starring Joan Collins and Donald Pleasence.

The early British horror masterpiece and a worthy successor to his work on the Universal Monsters movies, screen icon Bela Lugosi takes centre stage as a demented scientist on a killing spree in The Dark Eyes of London, the first British film to receive the ‘H’ censor rating for being ‘Horrific for Public Exhibition’. Adapted from a novel by Edgar Wallace, this landmark British film is featured here as a brand-new high definition remaster from original film elements in its original theatrical aspect ratio.

Joan Collins gives an unforgettable performance as a stripper cursed by a sinister dwarf to give birth to a demonic child in this classic 1970s exploitation horror directed by Hammer/Amicus veteran Peter Sasdy (Director, Countess Dracula, Taste the Blood of Dracula). Co-starring Eileen Atkins, Ralph Bates, Donald Pleasence and Caroline Munro, The Monster (aka I Don't Want to be Born) is featured here as a brand-new high definition remaster from original film elements in its original theatrical aspect ratio.


The Dark Eyes of London and The Monster are available on Blu-ray and DVD 11 October from Network
Pre-order from Network: British Horror Classics

Casimir Harlow said:
THE MONSTER aka I DON’T WANT TO BE BORN (1975)

Joan Collins gives an unforgettable performance as a stripper cursed by a sinister dwarf to give birth to a demonic child...
Click to expand...

Gotta love the 70s
A lot of people mispronounce it, but it sounds just the way it's spelled:
h-f-u-h-r-u-h-u-r-r.

Throw in Caroline Munro as her stripper buddy and Ralph Bates doing the most outrageous Italian accent ever heard and it only gets worse/better........its one of the reviews in my upcoming Halloween blu round up and its glorious. Get entering as everyone needs to win this.......
JVC DLA-N5, Sapphire SFCS203, Panasonic DMP-UB9000/DMP-BDT500, Apple TV 4K, Denon AVR-X4300H, Cambridge Audio 651W, Kef Q300 x2, Kef Q200c, Kef Ci160cl x 4, Kef Ci130cr x 4, Kef Q400b x2
My BD collection: Blu-ray.com - Blu-ray Movie collection
My Letterboxd: Mark Costello’s profile

I shall look forward to that!
A lot of people mispronounce it, but it sounds just the way it's spelled:
h-f-u-h-r-u-h-u-r-r.
You must log in or register to reply here.

Win a copy of Hearts of Darkness: A Filmmaker's Apocalypse on Blu-ray

Win a copy of Monstrum on Blu-ray

Win a copy of Brave New World on Blu-ray