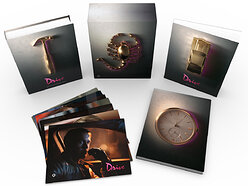 Fasten your seatbelt for the ride of a lifetime as the ‘very brutal, very slick LA pulp thriller’ (The Guardian), Drive gets the Limited Edition 4K UHD/Blu-ray treatment. Arriving on 30 May 2022, the exquisite collectable, bonus-filled box set is presented by Second Sight Films and Nicolas Winding Refn. The film will also be available individually as a Standard Edition 4K or Blu-ray.

This cult-classic sees Ryan Gosling as the formidable driver, in an outstanding performance that confirmed his status as a major Hollywood player, alongside another rising star early into her career, Carey Mulligan Bryan Cranston also stars, and Christina Hendricks gives a show-stealing turn in this stylish, wild, high-octane thrill ride, that’s filled with wickedly astounding action and awe-inspiring car chases that will leave you in a spin.

Hollywood stuntman and best in the business getaway driver (Gosling) has a strict professional code, but his loner lifestyle is turned upside down when he falls for his neighbour Irene (Mulligan). With her ex-con husband owing protection money, she’s sucked into the dangerous criminal underworld and there’s only one person that can her save her… the driver.


​
Drive gets the Limited Edition 4K UHD/Blu-ray treatment, arriving on 6th June 2022, the exquisite collectable, bonus-filled box set is presented by Second Sight Films and Nicolas Winding Refn. The film will also be available individually as a Standard Edition 4K or Blu-ray.

​
For Movie reviews, news and articles go to the AVForums Movie Hub.