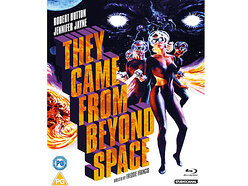 Starring Robert Hutton, Jennifer Jayne, Zia Mohyeddin and Bernard Kay THEY CAME FROM BEYOND SPACE was written by Milton Subotsky, the acclaimed screenwriter of Dr Who and the Daleks and Tales from the Crypt, adapted from the book ‘The Gods Hate Kansas’ by Joseph Millard. An enjoyably camp B-movie, the Amicus producers followed in the tradition of 50s classics such as Invasion of the Bodysnatchers adding some 60s kitsch-styling and ingenious low-budget special effects to this British retro treat.

Garrett said:
Another Came From film The Came From Beyond Space apparently this was a double feature with the Terrornauts and the latter was suppose to be the better film which would be a disservice to The Came From Beyond Space as its the better film although not great by any means and takes a few ideas from other films
Quatermass II and an other Came From film It Came From Outer Space
.
Its a British sci fi film but use Robert Hutton an American as the lead who not to bad in the role in fact he spent a fair but of time on these shores in roles in British productions inc a Bond film, The Saint and was in a segment of Torture Garden as one of the stars that never lost their looks.
The basic plot for a sci fi film ok but constrained by the budget and a poor ending (with a ridiculous name of the main villain? the music crap as well(, which the second film in my spoiler did better. If you think it's bad for for the humans the second half ramps it up.
I did have to think what flip as the hero impervious to the aliens as he has a silver plate in his head and gets a mate to a company and says he needs a silver shield on his head and he ask where he going to get the silver whilst looking at like 25 huge silver trophies, next scene you see in the dust where they been , honestly 2 or 3 would have done.
Not as good as the old American B sci fi films but not a bad one for the brits and way better than the TV movies seen on the Horror Channel. Based on a 1941 story The Gods Hate Kansas which is more global, than that set in a small part of England but then Star Trek go to planets and the story happens in an area little bigger than a back garden.

My review above of the film^
BTW I saw it as a support and was not The Terronauts.
Ruby Quartz Shades. Well, what would you prefer! Yellow spandex? Oh and Logan Stay Away From My Girl.

If anyone gets the wrong idea the males are trying a way to find a way to spot people that have been taken over by aliens and to subdue them without killing the host.
Ruby Quartz Shades. Well, what would you prefer! Yellow spandex? Oh and Logan Stay Away From My Girl.

My opinions expressed here are just that. That gaff is dyslexia ​
C

Oh god, had to rerun the trailer after he popped out from behind his detection gizmo and I saw his mind control beanie, laughing so hard my eyes were watering

Win a copy of PTU on Blu-ray

Win a copy of Uncle Vanya on Blu-ray

Win a copy of Supernatural: The Fifteenth and Final Season on Blu-ray

Win a copy of Brabham on Blu-ray

Win a copy of The Frightened City on Blu-ray