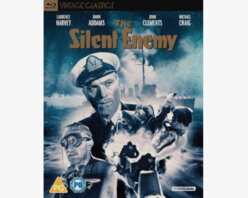 Win a copy of The Silent Enemy on Blu-ray

​
STUDIOCANAL is pleased to announce the release of a newly-restored version of the classic WW2 Naval thriller, ‘The Silent Enemy’.

Available to own on Blu-Ray, DVD and Digital from 11th April, ‘The Silent Enemy’ is based on the heroic wartime exploits of Lionel ‘Buster’ Crabb, who would famously disappear in mysterious circumstances several years after the end of the war, during a reconnaissance mission for the MI6.


In 1941, the Italians have created a new form of warfare – Frogmen – an intrepid band of men who travel astride small torpedo-type vessels, and attach explosive charges to the hulls of enemy ships, below their waterline.

The young Naval Lieutenant, 'Buster' Crabb (Laurence Harvey), an expert in mine and bomb disposal, is sent to Gibraltar to try and combat this new threat. Never having dived before, he sets to work to master the technique of underwater operations, and soon he and his team are able to locate many of the frogmen's charges and render them harmless. But with an invasion of North Africa imminent, time is not on the allies' side.

Notable for its remarkable and pioneering underwater action sequences as well as being credited as inspiration for Ian Fleming to write Thunderball, The Silent Enemy comes looking better than ever, complete with brand-new bonus content, as part of the Vintage Classics collection.

Win a copy of Bisping on Blu-ray