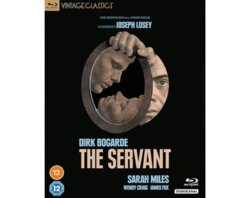 Win a copy of The Servant on Blu-ray
Competition Discussion

The multiple BAFTA-winning film, which has been meticulously restored as part of their VINTAGE CLASSICS collection, will premiere at Edinburgh International Film Festival on 19th August, followed by a cinema release on 10th September and a 4K UHD collector’s edition Blu-Ray, DVD & Digital release on 20th September.

Based on the screenplay by revered playwright Harold Pinter, THE SERVANT stars beloved British actor Dirk Bogarde (THE BLUE LAMP, DARLING, ACCIDENT) in the title role, alongside James Fox (A PASSAGE TO INDIA, THE CHASE), Sarah Miles (THE BIG SLEEP, RYAN’S DAUGHTER) and Wendy Craig (THE NANNY, THE MIND BENDERS).

Cited by Bong Joon Ho as one of five films that influenced his masterpiece PARASITE, THE SERVANT is considered ahead of its time for its ambitious cinematography and its exploration of class and sexual politics in 1960s Britain. It boasts stunning cinematography from Douglas Slocombe (THE LAVENDER HILL MOB, KIND HEARTS AND CORONETS), a fantastic soundtrack by composer John Dankworth (THE AVENGERS, DARLING) and is considered by many to be one of the greatest British films of the last century.


​
THE SERVANT opens in cinemas on September 10 and on 4K UHD Collector's Edition Blu-Ray, DVD and Digital on September 20.

Win a copy of Earwig and the Witch on Blu-ray