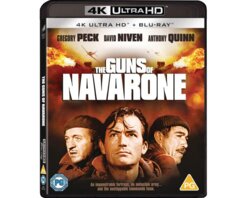 
THE GUNS OF NAVARONE
​

To celebrate the 60th anniversary of the acclaimed classic adventure war film THE GUNS OF NAVARONE, will be available on 4K Ultra HD and Blu-Ray for the first time! Adapted by screenwriter Carl Foreman from Alistair MacLean’s best-selling novel this seven time Oscar nominated film features an all-star cast of Gregory Peck (To Kill A Mockingbird, Roman Holiday), David Niven (Separate Tables, Murder By Death), and Anthony Quinn (Zorba The Greek, Lust For Life), and is available for the first time on 4K Ultra HD and Blu-Ray on November 1 courtesy of Sony Pictures Home Entertainment.


To celebrate the release we are giving YOU the chance to win a copy on 4K Ultra HD.​
THE GUNS OF NAVARONE follows a team of Allied Military specialists as they embark on a dangerous but imperative mission: to infiltrate a Nazi-occupied fortress and disable two long-range field guns so that 2,000 trapped British soldiers may be rescued. Faced with an unforgiving sea voyage, hazardous terrain, and the possibility of a traitor among them, the team must overcome the impossible without losing their own lives.


The Guns of Navarone is out on 4K UHD November 1

Win a copy of Final Fantasy: The Spirits Within on 4K Ultra HD Blu-ray