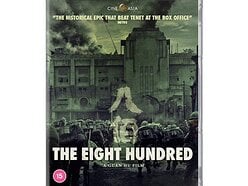 To celebrate the release we are giving YOU the chance to win a copy of The Eight Hundred on Limited Edition Blu-ray.

Shanghai, 1937; it’s been three months since Japan launched the invasion of China, and Japanese forces have been ordered to take control of a large central warehouse. Inside, a group of Chinese soldiers hold their ground, defending the city at any cost. 400 soldiers remain, yet they allow invaders to believe there are 800, confusing the enemy in an exhausting, bloody fight lasting four days and four nights.

With the conflict playing out in full view of Chinese civilians and both Americans and Europeans living across the river, the battle of the “Eight Hundred heroes” made world headlines; the first to be broadcast live around the world.

From acclaimed director Guan Hu, The Eight Hundred scored big at the global box office to become the highest-grossing film of 2020, standing tall as an action-packed war epic and a timeless tribute to bravery and sacrifice.

Read the Official AVForums review of The Eight Hundred HERE


​
The question for this competition is available to hear on our podcast live streamed on YouTube at 7pm BST on June 23rd 2021.

Win a copy of the Mandy Limited Edition Blu-ray

Wednesday at 9:11 AM
Casimir Harlow

Win a copy of John Carpenter's Dark Star on Blu-ray