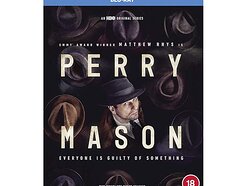 Win a copy of Perry Mason: The Complete First Season on Blu-ray

Comes to Blu-ray™ and DVD on

Release Includes All Eight Season One Episodes Plus Bonus Content​

Perry Mason: The Complete First Season follows the origins of American fiction’s most legendary criminal defense lawyer, Perry Mason. When the case of the decade breaks down his door, Mason’s relentless pursuit of the truth reveals a fractured city and just maybe, a pathway to redemption for himself.