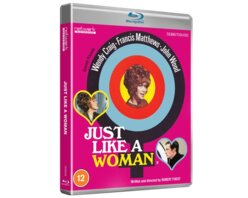 Win a copy of Just Like a Woman on Blu-ray

ON BLU-RAY, DVD & DIGITAL FROM JULY 5
​
New to Network Distributing’s The British Film label this summer, comes a release that will take you on a silly and psychedelic trip through 1960s British comedy with Just Like a Woman from prolific director, producer and writer Bob Kellett.

A notable presence in the British film industry throughout the 1960s-70s, Bob Kellett was known for directing classic British comedy feature film spin-offs, including Up Pompeii and its sequels (1971-72) with Frankie Howerd, The Alf Garnett Saga (1972) with Warren Mitchell and Are You Being Served? (1977) with John Inman.

Just Like a Woman (1966) marked Bob’s first full length feature film production and Robert Fuest’s directorial debut, with whom Kellett would later collaborate with for the short Vive Le Sport. This psychedelic oddity captured the swinging sixties vibrancy and idiosyncrasies as Wendy Craig (Butterflies, And Another Makes Three & Five) and Francis Matthews star as a bickering couple going through an acrimonious separation.

Just Like a Woman is presented here as a brand-new High-Definition restoration from their original elements in their as-exhibited theatrical aspect ratios by Networks’ award-winning in-house team. Making itsBlu-ray and Digital debut, it contains a host of special features including newly recorded interviews.

​
Just Like a Woman is available on Blu-ray/DVD and Digital from Amazon Prime from 5th July
Pre-order now: www.networkonair.com

The question to win this is who directed it. When I clicked to enter the director's name was not one of the options.

brian s said:
The question to win this is who directed it. When I clicked to enter the director's name was not one of the options.

Thanks for that, fixed now!
Movie Review Co-ordinator
The Best Blu-ray and Movie Resource AVForums Movie Reviews Bookmark it now!
My opinions expressed here are not necessarily those of the AV Forums or the associated websites

Casimir Harlow said:
Thanks for that, fixed now!
Click to expand...