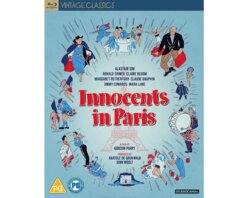 
STUDIOCANAL is releasing a newly-restored version of the British comedy classic, INNOCENTS IN PARIS. Directed by Gordon Parry (Third Time Lucky, Now Barabbas) and starring Alastair Sim (School for Scoundrels, The Green Man), this stunning new restoration is available to own on Digital, Blu-Ray and DVD NOW and on VOD from June 6.
​

An assortment of British tourists fly away for a wild and wonderful weekend in Paris, where each character finds that the city welcomes them and changes their lives in different ways, often with hilarious results.

An English diplomat (Alastair Sim) is on a working trip to obtain an agreement with his Russian counterpart; a Royal Marine bandsman (Ronald Shiner) has a night out on the tiles after winning a pool of the French currency held by all the Marines in his band; a young woman (Claire Bloom) is wined and dined by an older Parisian man (Claude Dauphin) who gives her a tour of Paris; an amateur artist (Margaret Rutherford) searches out fellow painters on the Left Bank and in the Louvre; a hearty Englishman (Jimmy Edwards) spends the entire weekend in an English-style pub; an archetypal Scotsman and Battle of Normandy veteran (James Copeland) finds love with a young French woman.

Win a copy of Bisping on Blu-ray