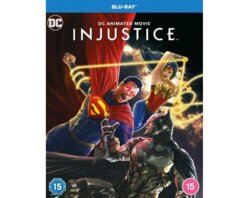 Win a copy of Injustice on Blu-ray
Competition Discussion

The animated film, Injustice finds an alternate world gone mad - where The Joker has duped Superman into killing Lois Lane, sending the Man of Steel on a deadly rampage. Unhinged, Superman decides to take control of the Earth for humanity’s own good. Determined to stop him, Batman creates a team of like-minded, freedom-fighting heroes. But when Superheroes go to war, can the world survive?​

Justin Hartley (This is Us, Smallville) and Anson Mount (Star Trek Discovery, Hell on Wheels) lead the Injustice all-star cast as Superman and Batman, respectively, in an all-new DC Animated Film. Produced by Warner Bros. Animation, DC and Warner Bros. Home Entertainment, the feature-length animated film is set for release on Blu-ray, DVD and Digital on 19th October.


​
Injustice is out now on digital and available on DVD and Blu-ray 19th October.

Win a copy of People Just Do Nothing: Big In Japan on Blu-ray