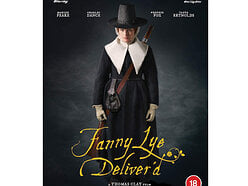 This singular vision of seventeenth-century England from director Thomas Clay, set around a purpose-built farm in the Shropshire countryside, is a work of astounding power and beauty. Part western, part folk-horror, part political parable, with spectacular 35mm cinematography by Giorgos Arvanitis (Palme d'Or winner Eternity & a Day) and meticulous costume design from multi-award-winner Michael O'Connor, Fanny Lye Deliver'd is a film unlike any other in modern British cinema.

The 2-Disc Collectors' Edition is limited to 3000 individually-numbered units. It contains an exclusive 130m extended cut of the film in 4K UHD Dolby Vision HDR, alongside an exclusive director commentary, with the 111m Theatrical Cut, Cast + Director Q&A and Stills Gallery on standard blu-ray. Both discs have been authored and encoded by David Mackenzie / Fidelity in Motion from scans of the original 35mm negative via a 16-bit 4K workflow. The accompanying booklet contains an exclusive essay by Professor Nigel Smith of Princeton University, alongside a premiere review and director interview.

© 2021 Pull Back Camera All Rights Reserved