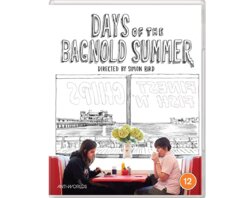 
To celebrate the release, we are giving YOU the chance to win a copy on Blu-ray​

Anti-Worlds collector’s edition disc is a world first Blu-ray edition and features a huge array of extras giving a deep dive into the film. We will release a WEBSITE ONLY very limited “O” card edition on March 25th – that includes brand new commissioned artwork from Joff Winterhart.

To make it extra special the first 500 copies only will be signed by Simon Bird.

SYNOPSIS: Sue (Dolan) works in a library. Daniel (Cave) eats crisps and listens to Metallica. This was the summer Daniel was due to spend with his dad and his dad’s new wife in Florida. But when they cancel his trip at the last minute, Sue and Daniel suddenly face the prospect of six long weeks together. An epic war of wills ensues in the unassuming battleground of their suburban home as they each reckon with private tragedies – and pursue their personal passions.

SIMON BIRD is best known for playing the sarcastic but lovable geek Will in the hugely popular and successful The Inbetweeners TV series and feature films, as well as the long running series Fright Night Dinner. Bird also co-created, co-wrote, and co-starred in Chickens, a series for Big Talk Productions and Sky. His first film as a director, the short Ernestine & Kit produced by Stigma Films supported by Creative England via BFI NETWORK, premiered at SXSW in 2016 and gained a Best Short Film nomination at the Irish Film and Television Awards.

Win a copy of Infinite Football on Limited Edition Blu-ray

Win a copy of Patrick on Limited Edition Blu-ray