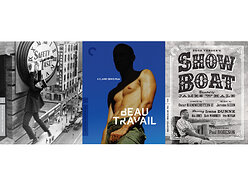 The Criterion Collection and Sony Pictures Home Entertainment are delighted to add three new titles in September 2020 and we are giving YOU a chance to win a copy of ALL of them on Blu-ray™.

The comic genius of silent star Harold Lloyd is eternal. Chaplin was the sweet innocent, Keaton the stoic outsider, but Lloyd—the modern guy striving for success—is us. And with its torrent of perfectly executed gags and astonishing stunts, Safety Last! is the perfect introduction to him. Lloyd plays a small-town bumpkin trying to make it in the big city, who finds employment as a lowly department-store clerk. He comes up with a wild publicity stunt to draw attention to the store, resulting in an incredible feat of derring-do on his part that gets him started on the climb to success. Laugh-out-loud funny and jaw-dropping in equal measure, Safety Last! is a movie experience par excellence, anchored by a genuine legend.

JEROME KERN and OSCAR HAMMERSTEIN II’s immortal musical adaptation of EDNA FERBER’s sprawling novel receives its most faithful and enduring cinematic adaptation under the elegant direction of JAMES WHALE (Bride of Frankenstein). A rich portrait of changing American entertainment traditions and race relations, Show Boat spans four decades and three generations as it follows the fortunes of the stage-struck Magnolia (The Awful Truth’s IRENE DUNNE), an aspiring actor whose journey takes her from her family’s humble floating playhouse in the 1880s South to the height of fame in the 1930s North. The cast of show-business legends includes HELEN MORGAN (Applause), HATTIE McDANIEL (Gone with the Wind), CHARLES WINNINGER (Beyond Tomorrow), and the great PAUL ROBESON (The Emperor Jones), whose iconic, soul-shaking rendition of “Ol’ Man River” is one of the crowning glories of the American stage and screen.

With her ravishingly sensual take on HERMAN MELVILLE’s Billy Budd, Sailor, CLAIRE DENIS (White Material) firmly established herself as one of the great visual tone poets of our time. Amid the azure waters and sunbaked desert landscapes of Djibouti, a French Foreign Legion sergeant (Mauvais sang’s DENIS LAVANT) sows the seeds of his own ruin as his obsession with a striking young recruit (35 Shots of Rum’s GRÉGOIRE COLIN) plays out to the thunderous, operatic strains of BENJAMIN BRITTEN. Denis and cinematographer AGNÈS GODARD (Let the Sunshine In) fold military and masculine codes of honor, colonialism’s legacy, destructive jealousy, and repressed desire into shimmering, hypnotic images that ultimately explode in one of the most startling and unforgettable endings in all of modern cinema.

Would be a great win this, always loved Harold Lloyd Safety Last is absolute genius and very funny.
And anyone else thinking of buying from this bloke please do items are tip top
Miss you Mum. Denise A.R. Lambourne 9/11/1943/ - 12/3/2011