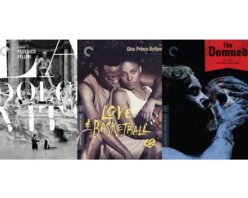 The biggest hit from the most popular Italian filmmaker of all time, La dolce vita rocketed FEDERICO FELLINI (8½) to international mainstream success—ironically, by offering a damning critique of the culture of stardom. A look at the darkness beneath the seductive lifestyles of Rome’s rich and glamorous, the film follows a notorious celebrity journalist—played by a sublimely cool MARCELLO MASTROIANNI (8½)—during a hectic week spent on the peripheries of the spotlight. This mordant picture was an incisive commentary on the deepening decadence of the European 1960s, and it provided a prescient glimpse of just how gossip- and fame-obsessed our society would become.

Sparks fly both on and off the court in this groundbreaking feature debut by writer-director GINA PRINCE-BYTHEWOOD (The Old Guard), which elevated the coming-of-age romance by giving honest expression to the challenges female athletes face in a world that doesn’t see them as equal. SANAA LATHAN (Alien vs. Predator) and OMAR EPPS (Higher Learning) make for one of the most iconic screen couples of the 2000s as the basketball-obsessed next-door neighbours who find love over flirtatious pickup games, fall apart under the strain of high-pressure college hoops and families, and drift in and out of each other’s lives as they pursue their twin aspirations of playing professionally. Aided by stellar supporting performances and an eclectic R&B soundtrack, Love & Basketball captures the intoxicating passions, heartbreaking setbacks, and sky-high ambitions that mark a young woman’s journey to the top of her game and to lasting love.

The most savagely subversive film by the iconoclastic auteur LUCHINO VISCONTI (The Leopard) employs the mechanics of deliriously stylized melodrama to portray Nazism’s total corruption of the soul. In the wake of Hitler’s ascent to power, the wealthy industrialist von Essenbeck family and their associates—including the scheming social climber Friedrich (The Night Porter’s DIRK BOGARDE), the incestuous matriarch Sophie (Winter Light’s INGRID THULIN), and the perversely cruel heir Martin (The Godfather: Part III’s HELMUT BERGER, memorably donning Dietrich-like drag in his breakthrough role)—descend into a self-destructive spiral of decadence, greed, perversion, and all consuming hatred as they vie for power, over the family business and over one another. The heightened performances and Visconti’s luridly expressionistic use of Technicolor conjure a garish world of decaying opulence in which one family’s downfall comes to stand for the moral rot of a nation.


The Criterion Collection and Sony Pictures Home Entertainment present LA DOLCE VITA on 18th October, and LOVE & BASKETBALL and THE DAMNED on 25th October, on Blu-ray™