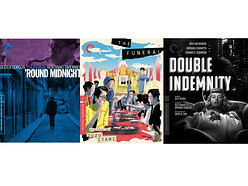 ’Round Midnight is a love letter from director BERTRAND TAVERNIER (Coup de torchon) to the heyday of bebop and to the Black American musicians who found refuge in the smoky underground jazz clubs of 1950s Paris. In a miraculous, sui generis fusion of performer and character, legendary saxophonist DEXTER GORDON plays Dale Turner, a brilliant New York jazz veteran whose music aches with beauty but whose personal life is ravaged by addiction. Searching for a fresh start, Turner relocates to Paris, where he strikes up an unlikely friendship with a struggling single father and ardent jazz fan (The Intouchables’ FRANÇOIS CLUZET) who finds his life transformed as he attempts to help the self-destructive musician. HERBIE HANCOCK’s evocative, Oscar-winning score sets the mood for this definitive jazz film, a bittersweet opus that glows with lived in, soulful authenticity

It’s death, Japanese style, in the rollicking and wistful first feature from maverick writer-director JUZO ITAMI (Tampopo). In the wake of her father’s sudden passing, a successful actor (Itami’s wife and frequent collaborator, NOBUKO MIYAMOTO) and her lascivious husband (Kagemusha’s TSUTOMU YAMAZAKI) leave Tokyo and return to her family home to oversee a traditional funeral. Over the course of three days of mourning that bring illicit escapades in the woods, a surprisingly materialistic priest (Yasujiro Ozu regular CHISHU RYU), and cinema’s most epic sandwich handoff, the tensions between public propriety and private hypocrisy are laid bare. Deftly weaving dark comedy with poignant family drama, The Funeral is a fearless satire of the clash between old and new in Japanese society in which nothing, not even the finality of death, is off-limits.

Has dialogue ever been more perfectly hard-boiled? Has a femme fatale ever been as deliciously evil as BARBARA STANWYCK (The Lady Eve)? And has 1940s Los Angeles ever looked so seductively sordid? Working with cowriter RAYMOND CHANDLER, director BILLY WILDER (Ace in the Hole) launched himself onto the Hollywood A-list with this paragon of film-noir fatalism from JAMES M. CAIN’s pulp novel. When slick salesman Walter Neff (The Caine Mutiny’s FRED MACMURRAY) walks into the swank home of dissatisfied housewife Phyllis Dietrichson (Stanwyck), he intends to sell her insurance, but he winds up becoming entangled with her in a far more sinister way. Featuring scene-stealing supporting work from EDWARD G. ROBINSON and the chiaroscuro of cinematographer JOHN F. SEITZ (Sunset Blvd.), Double Indemnity is one of the most wickedly perverse stories ever told and the cynical standard by which all noir must be measured.

The Criterion Collection and Sony Pictures Home Entertainment present 'ROUND MIDNIGHT on 9th May 2022 and THE FUNERAL and DOUBLE INDEMNITY on 30th May 2022, on Blu-ray™

Win a copy of Uncharted on Blu-ray