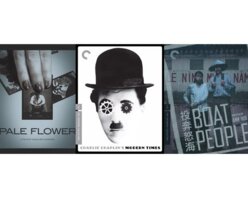 In this cool, seductive jewel of the Japanese New Wave, a yakuza, fresh out of prison, becomes entangled with a beautiful yet enigmatic gambling addict; what at first seems a redemptive relationship ends up leading him further down the criminal path. Bewitchingly shot and edited and laced with a fever-dreamlike score by Toru Takemitsu (Woman in the Dunes, Ran), this breakthrough gangster romance from Masahiro Shinoda (Samurai Spy, Double Suicide) announced an idiosyncratic major filmmaking talent. The pitch-black Pale Flower (Kawaita hana) is an unforgettable excursion into the underworld.

Modern Times, Charlie Chaplin’s last outing as the Little Tramp, puts the iconic character to work as a giddily inept factory employee who becomes smitten with a gorgeous gamine (Paulette Goddard). With its barrage of unforgettable gags and sly commentary on class struggle during the Great Depression, Modern Times—though made almost a decade into the talkie era and containing moments of sound (even song!)—is a timeless showcase of Chaplin’s untouchable genius as a director of silent comedy.

One of the preeminent works of the Hong Kong New Wave, Boat People is a shattering look at the circumstances that drove hundreds of thousands of Vietnamese refugees to flee their homeland in the wake of the Vietnam War, told through images of haunting, unforgettable power. Three years after the Communist takeover, a Japanese photojournalist (Passion’s GEORGE LAM) travels to Vietnam to document the country’s seemingly triumphant rebirth. When he befriends a teenage girl (Silent Love’s SEASON MA) and her destitute family, however, he begins to discover what the government doesn’t want him to see: the brutal, often shocking reality of life in a country where political repression and poverty have forced many to resort to desperate measures in order to survive. Transcending polemic, renowned director ANN HUI (A Simple Life) takes a deeply humanistic approach to a harrowing and urgent subject with searing contemporary resonance.

Win a copy of Uncharted on Blu-ray