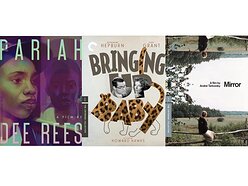 The path to living as one’s authentic self is paved with trials and tribulations in this revelatory, assured feature debut by DEE REES (Mudbound)—the all too rare coming-of-age tale to honestly represent the experiences of queer Black women. Grounded in the fine-grained specificity and deft characterizations of Rees’s script and built around a beautifully layered performance from ADEPERO ODUYE (12 Years a Slave), Pariah follows Brooklyn teenager Alike, who is dealing with the emotional minefields of both first love and heartache and the disapproval of her family as she navigates the expression of her gender and sexual identities within a system that does not make space for them. Achieving an aching intimacy with its subject through the expressive cinematography of BRADFORD YOUNG (Arrival), his deeply felt portrait finds strength in vulnerability and liberation in letting go.

Screwball sparks fly when CARY GRANT (Charade) and KATHARINE HEPBURN (The Philadelphia Story) let loose in one of the fastest and funniest films ever made—a high-wire act of invention that took American screen comedy to new heights of absurdity. Hoping to procure a million-dollar endowment from a wealthy society matron for his museum, a hapless palaeontologist (Grant) finds himself entangled with a dizzy heiress (Hepburn) as the manic misadventures pile up—a missing dinosaur bone, a leopard on the loose, and plenty of gender bending mayhem among them. Bringing Up Baby’s sophisticated dialogue, spontaneous performances, and giddy innuendo come together in a whirlwind of comic chaos captured with lightning-in-a-bottle brio by director HOWARD HAWKS (Red River).

A subtly ravishing passage through the halls of time and memory, this sublime reflection on twentieth century Russian history by ANDREI TARKOVSKY (Stalker) is as much a poem composed in images, or a hypnagogic hallucination, as it is a work of cinema. In a richly textured collage of varying film stocks and newsreel footage, the recollections of a dying poet flash before our eyes, his dreams mingling with scenes of childhood, wartime, and marriage, all imbued with the mystical power of a trance. Largely dismissed by Soviet critics on its release because of its elusive narrative structure, Mirror has since taken its place as one of the director’s most renowned and influential works, a stunning personal statement from an artist transmitting his innermost thoughts and feelings directly from psyche to screen.


The Criterion Collection and Sony Pictures Home Entertainment present PARIAH on 12th July and BRINGING UP BABY and THE MIRROR on 26th July, on Blu-ray™