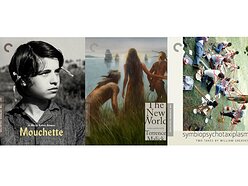 The Criterion Collection and Sony Pictures Home Entertainment are delighted to add three new titles in December 2020 and we are giving YOU a chance to win a copy of ALL of them on Blu-ray™.

This singular vision of early seventeenth-century America from TERRENCE MALICK is a work of astounding elemental beauty, a poetic meditation on nature, violence, love, and civilization. It reimagines the apocryphal story of the meeting of British explorer John Smith (COLIN FARRELL) and Powhatan native Pocahontas (Q’ORIANKA KILCHER, in a revelatory performance) as a romantic idyll between spiritual equals, then follows Pocahontas through her marriage to John Rolfe (CHRISTIAN BALE) and her life in England. With art director JACK FISK’s raw re-creation of the Jamestown colony, EMMANUEL LUBEZKI’s marvelous, naturally lit cinematography, and JAMES HORNER’s soaring musical score, The New World is a film of uncommon power and technical splendor, one that shows Malick at the height of his visual and philosophical powers.

ROBERT BRESSON (Au hasard Balthazar) plumbs great reservoirs of feeling with Mouchette, one of the most searing portraits of human desperation ever put on film. With a dying mother, an absent, alcoholic father, and a baby brother in need of care, the teenage Mouchette seeks solace and respite from her circumstances in the nature of the French countryside and daily routine. Bresson deploys his trademark minimalist style to heartbreaking effect in this essential work of French filmmaking, a hugely empathetic drama that elevates its trapped protagonist into one of the cinema’s most memorable tragic figures.

In his one-of-a-kind fiction/documentary hybrid Symbiopsychotaxiplasm Take One, the pioneering WILLIAM GREAVES (Ralph Bunche: An American Odyssey) presides over a beleaguered film crew in New York’s Central Park, leaving them to try to figure out what kind of movie they’re making. A couple enacts a breakup scenario over and over, a documentary crew films a crew filming the crew, locals wander casually into the frame: the project defies easy description. Yet this wildly innovative sixties counterculture landmark remains one of the most tightly focused and insightful movies ever made about making movies, expanded thirty-five years later by its unconventional follow-up, Symbiopsychotaxiplasm Take 2½. The “sequel” sees Take One actors AUDREY HENNINGHAM and SHANNON BAKER reunited in a more personal, metatheatrical exploration of the effects of the passage of time on technology, the artistic process, and relationships—real and fabricated.