Can you use 1 with a projector

You only get an 8ft lead on the sensor bar. You can however use a pair of candles or LED's or somat?

hi there mate, the sensor bar dosent need to be plugged into the wii, it only draws power from it, it works by having 4 ir leds on either side that the wiimote can see and then it triangulates its position off them, use your mobile phone camera and point to it while its plugged in to see the lights! it does not need to be plugged into the wii at all just for power, heres how i got roundit!


For those Wii owners with abnormally large living rooms, projector TV setups, or a particular penchant for tricking out their console just 'cause, take heed. Without the need for candles, IR hacks, PCBs, soldering, or even (visibly) voiding your warranty, you to can hack that Wii sensor bar to make it wireless for $8 (or less). Simply head to Radio Shack and snag:

Now just strip your 9V battery connector wires, crimp those to the power pins of your Sensor bar with the butt connectors (battery red to Wii red, battery black to Wii orange). We have no idea how long it'll last -- nor do we make guarantees that it'll work or won't fry your bar -- but peep AVS for some more details on this and other Wii hacks.

or theres this way

From the moment I picked up my Nintendo Wii last Sunday morning, I've been very curious about the design and functionality of the Wiimote and its sensor bar. Of course, I'm not the only one. Through a few links on sites like digg, it has come to other people's attention that the Wii sensor bar both only consists of IR LEDs and also sends no signal between the Wii and the bar... only power.

This had me thinking. It my apartment in Boston, I have a projector, but I feared hooking my Wii up to it because of the length I'd need to have in the cable to put the bar right under the image. Then, I thought, maybe I can make one.

With just a perf board, some wires, a bit of soldering, 4 AA batteries, and 4 IR LEDs, I was able to make this:


Yes, it's ugly. Yes, it's ghetto. But, it is a wireless, battery-powered Wii Sensor Bar. And it works.

First, I measured the distance between the middle of the left set of LEDs on the Nintendo sensor bar to the middle of the right set. That came out to be 7 1/2 inches. It wasn't a perfect measurement, but since the Wiimote triangulates the distance, it's accurate enough. Soldering wire from the positive side of the battery holder to a switch, the switch to the positive end of one of the IR LEDs, then to the next, to the next, to the next, and then back to the battery terminal, it was easily completed.

Soldering some wires together!

Placed on top of my TV showed that it was a success... the Mii plaza, the Wii menus, Wii sports, and Zelda all worked and moved just as well as it had with Nintendo's stock sensor bar. There is no need for a wireless transmitter or an extension cord. Just unplug Nintendo's stock bar, put your homebrew wireless Wii sensor bar in place, and you're good to go.
A friend is someone who gives you total freedom to be yourself.
Jim Morrison
P

I just added a cheap Maplins variable voltage adapter to my sensor bar.
It was on special at &#163;3.99 and managed to connect it as per the photo.
I'm running at 6v without problems.
Make sure the PJ is ceiling mounted as you will be in the way while playing Wii Sports.
I find it brilliant - although I think bowling might actually be better with a lower screen - I now don't look at the screen while bowling as I always end up spinning left 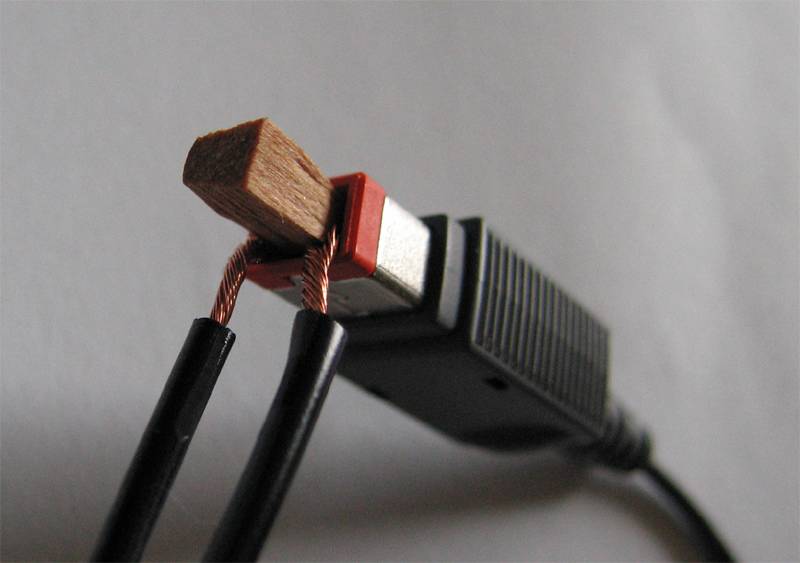 The bottom of my 90in screen is about 4ft from the floor with the PJ mounted about 2ft from the ceiling on a shelf about 12ft back. I am a short ar5e 5'7" and find that this is a perfect combo. ie when I take my steps forward to bowl I am already on my way down into the left foot forward crouch bowling stance by the time my head would impinge on the image when standing. So not a hair on my head casts a shadow on the screen

Thank god it worked out like that because I would hate to have had to have done the trigometric calculations to work out Screen, PJ, Wii and Mii position, PJ offset etc to rule out shadows when bowling!

As for screen height I find I am looking right down the lane without having to crane my neck in any way. ie I feel the apparent perspective down the lane when I am bowling with my screen 4ft from the floor is just about right and not to far from the real thing.
Keith D.

Hi there, I bought the blaze componant cable and set it up today, I am disapointed its very poor quality maybe its because im spoilt with pc and xbox 360 hd gaming but the 420p looks horrible on my hitachi tx200.

Brought the Wii to work today and used it with a projector in work via composite and everyone was impressed with visual quality.

Yeah, I'm sure they'd think different if they'd have seen an xbox on 1080 hd, but still, great success, everyone from minions up to the centre manager loved it!


I am so getting a benq w100 with my jan 31 pay packet....
Food for thought - What was the Age of Enlightenment?
A movement that advocated REASON to lead the world into progress from the dubious tradition, irrationality, superstition, and tyranny of the Dark Ages.
How did the Dark Agers become so powerful in America?

belfast-biker said:
Brought the Wii to work today and used it with a projector in work via composite and everyone was impressed with visual quality.

Yeah, I'm sure they'd think different if they'd have seen an xbox on 1080 hd, but still, great success, everyone from minions up to the centre manager loved it!

The W100 will fit the Wii perfectly as its native 480p. Just a side note. The Virtual Console requires a standard paddle and cant use the Wii Remote!!!! Mario Kart 64...Noooooo. And ive traveled about 100 miles (to every shop) trying to find a second flippin Nunchuk!

Anim said:
The W100 will fit the Wii perfectly as its native 480p. Just a side note. The Virtual Console requires a standard paddle and cant use the Wii Remote!!!! Mario Kart 64...Noooooo. And ive traveled about 100 miles (to every shop) trying to find a second flippin Nunchuk!

nunchuks in woolies generally (well the 2 branches I have looked in)
You must log in or register to reply here.

D
Help me choose a projector and screen