wii and a pj

anyone got any info as to whether it is possible to connect a wii up to a projector, my projector is an infocus 4805. please reply.

Wii has either Composite or Component out, I'd say there's a fair chance you pj has component in, so go for that

wireless sensor bar is the way forward, can work up to about 35 feet away.

yeah i think my composie connection is free, component and svideo are taken by dvd and freeview. has anybody on here got thei wii on a pj? how mu ch are the wireless sensor bars and does it go underneath the screenor anywhere?

also where can i buy the appropriate cable fom in a decent length, and would it just be a composite to composite cable?
H

I've got my Wii hooked up to my Panny AX100 using the official component cable (see link below) attached to a 10 meter profigold component cable. It's projected on to a 110 inch screen and it's looks good... but plays even better:

To be honest, although it's not a hi-def console and it's never going to look as good as a 360 on the big screen, if you use the composite cable it'll look awful. You're much better off investing in a decent quality component cable of suitable length and attaching the Wii component cable to it. If you're component output is already in use it might be worth investing in a splitter. Trust me, playing Wii Tennis and Bowling on a BIG screen with your mates is the only way to play.

My PJ screen is sitting above a 32 inch t.v. - it's no contest choosing which screen to use when playing on the Wii. 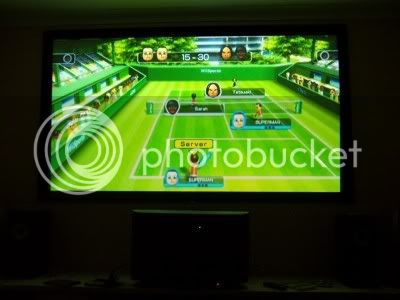 P.S. The sensor bar sits below the screen and is still perfectly accurate.

thanks for the quick and good reply mate, what exactly do you mean by connect the official cable to a profigold and how exactly?
M

p5yco said:
thanks for the quick and good reply mate, what exactly do you mean by connect the official cable to a profigold and how exactly?
Click to expand...

I would assume that he has an amp that does video switching. Official cable to amp and then profigold cable from amp to PJ.

Then assuming the Wii is located near your amp/hi-fi simply connect the 2 stereo leads from the Wii component into your amp and Robert's your Mother's uncle.
H

Or do what the other guy above says

oh excellent! cheers for the reply guys. do you lose much quality in joining the cables with an adaptor?
H

I'm using a decent quality profigold 3 phono connector and the quality is still good. Just make sure the cables are in good and tight.

Does the Wii work as well as an LCD?

You know with the screen being so big and the Sensor so small, I'm thinking that your directional input may be way off..

on my 7 foot wide screen. It can be a bit weird when you first point the controller at the screen. It doesn't show where you thought it would, but once your sensor is on screen, it's easy to flick around as our brains does the work for us.
In theory you could put two LEDs at the corners of the screen (or at whatever position makes the pointer show at the corner when you point it at the corner), but I'm not sure I would like it as much for general gaming like Mario Galaxy. as you would have to move your arm around a lot more.
My Flickr
You must log in or register to reply here.

N
Which projector for Component and S-Video support as well as HDMI?