Right, after months of delays from when it was initially set for release, it's finally coming this Wednesday(confirmed by majornelson) at 800 points

Thought there was already a thread for this game but nothing in the search so thought I post up the old teamxbox preview, was written over a year ago but you can see the potential this game could have

A few quotes taken from the preview, but worth reading it in full and checking out the stunning looking screen shots, have high hopes for this one!

like many XBLA games, War World doesn't have a single player campaign, as it's pretty tough to include detailed cutscenes to flesh out a story. Essentially, the game is an action-packed third-person shooter that pits a variety of robots against each other in a number of different environments. The game features a solo arcade mode in which the player will given a predetermined robot and be tasked with completing an objective of some sort. You'll be able to playing online and offline multiplayer modes that can be fleshed out with AI-controlled bots (online supports 8 players, while offline allows one player to fight up to 15 bots).
Click to expand... 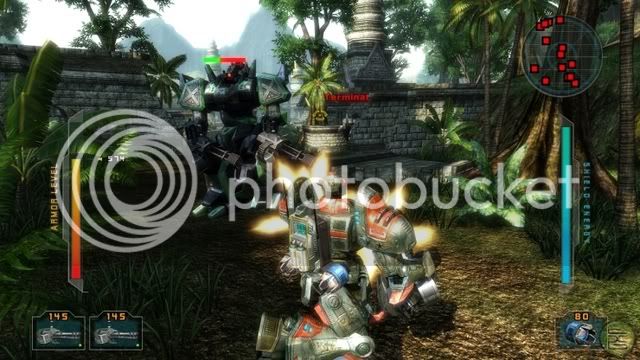 War World is a third-person shooter that features fast-paced robot-on-robot action, and the controls make it fairly easy to pick up and play. As you might expect from a shooter, the right trigger will fire your main weapon, with the left trigger being used to deploy any mines or mortars that your mech is equipped with. Some robots have the ability to quickly thrust forward for a few moments with a press of the left bumper, while the right one is used to fire your missiles. Pressing A will allow you to jump, and hitting B will give you a temporary shield that will run out after a few moments and can't be used again until you let it replenish. Finally, one of the robots can go invisible for up to 10 seconds with a press of the X button, although it will pop back in once it fires its weapons.
Click to expand...

War World will feature 8 different maps, and we had a chance to check the majority of them out. There seems to be a nice bit of variety in this area, with the environments ranging from the bombed-out Nuke City to the wide-open Desert Compound. The latter features very little in the way of structures or trees, which means you'll be able to see your enemies from far away (and vice versa). Nuke City, on the other hand, offers a lot of hiding places and verticality, which allows for some different types of gameplay. I was a big fan of the temple level, which was surrounded by a lush jungle, as well as the one that took place in a large quarry.

To say that War World is one of the best looking XBLA games yet is an understatement &#8211; it's a stunner. Sure, it's not Gears of War or anything, but looks better than a lot of stuff seen on the original Xbox, and it feature a bright, vibrant design aesthetic. While there are still some framerate issues (it chugs a bit when there's a lot of action onscreen), the animations are pretty smooth overall. The sounds is strong, too, especially when you're in the middle of combat. There was one moment when I thought that I had dispatched all of my foes and was shocked to hear a rocket go whizzing by my (well, my robot's) ear. All in all, this is a pretty impressive offering for XBLA.
Click to expand...

Just noticed IGN had a hands-on preview with the finished build last week(not sure how I managed to miss that one), sounds good, a couple videos of the game in action aswell.

Damn, the graphics and sound are better than Halo 3, amazing when you consider this is just an Arcade title

Definitely be checking out the demo....

kismet110 said:
Damn, the graphics and sound are better than Halo 3, amazing when you consider this is just an Arcade title
Click to expand...

Funny you should say that Ali, watching those gameplay videos reminded me a lot of Halo3, like you say, pretty huge merrits for an XBLA title. Roll on tomorrow, hope this one won't be region-locked as quite a few XBLA games are for me lately.
​

Looks nice, but it's hard to get a sense of the game when you can only play as the lightest mech and get kicked out after two kills.
Click to expand...

Totally agree with you there Karl, criminally short demo and even with replaying it doesn't give you chance to get a feel for the game

Anyway, after all the waiting I don't think it was my cuppa, very impressive for an XBLA title, but just too twitchy with the aiming and I found myself feeling kinda disorientated and struggling to focus on the enemies.
​

W
Putin's Latest Whinge ... Show Him For What He is

Best Action Movies in the World ...ever! that you should watch
2 3 4