“Vagrant Queen follows Elida from child queen to orphaned outcast, as she scavenges the treacherous corners of the galaxy, always one step ahead of the Republic government out to extinguish her bloodline. When her old friend Isaac shows up claiming her mother Xevelyn is still alive, they head off with their new ally, Amae, to stage a rescue that will take her back into the perilous heart of her former kingdom and up against a deadly foe from her childhood, Commander Lazaro.”

Adriyan Rae will star as Elida, the titular vagrant queen

Besides aforementioned showrunner Jem Garrard, Vagrant Queen’s creative team will also be comprised of writers Mika Collins (Deep Six) and Mariko Tamaki (Skim). Garrard herself will be stepping in the director’s chair for some episodes, as will Danishka Esterhazy (Banana Splits). Also aboard are executive producers such as Lance Samuels & Daniel Iron (Goalie), along with Vault Comics’ F.J. DeSanto & Damian Wassel.

Vagrant Queen is set for a premiere on Syfy in 2020 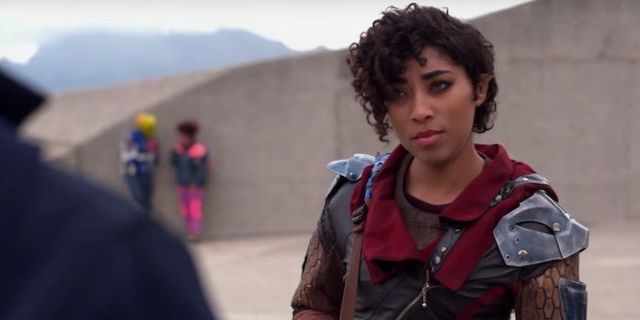 Syfy has released the first teaser trailer for their forthcoming TV adaptation of Vagrant Queen, [...]

SYFY today announced the 10-episode series Vagrant Queen is set to premiere on March 2. The series is based on the comic book series from Vault Comics.