Until the End of the World directors cut (4 hours)

Anyone know anything about this?
Apparently there is a 4 hours directors cut that was released in Italy . Easy enough to find and get apparently but I wouldn't mind knowing if someone here actually has it and could comment on pic and sound quality.

Bit of a mess of a film but it has its moments. I remember renting it when it came out on video years ago and watching it in my halls of residence (even then I managed to persuade everyone we needed to rent a massive TV!) Lots of people were really keen on it at first but as it dragged on ...people started wondering if it would ever end and this was the 2hr 40mins version.

Is this the Wim Wenders movie? If so it has a great music soundtrack. Lou Reed, REM, U2, kd lang, Elvis Costello, Nick Cave, etc...
Ancient Oriental proverb: "Correct the wise man and he will thank you. Correct the fool and he will attack you."
M

Yep thats the one and yep very good soundtrack . I had it but someone at work nicked it.
Nicely photographed and generally an interesting enough film but its sooooo long : its more like 3 films rolled together. It does feel quite contempory too , quite a realistic portrayal of the near future for its time.

You get 2 hours into it and sort of think oh this must be the end coming up and then it continues for another 90 mins!

Some really good ideas not fully explored such as the forced migration of the entire global population because no-one can predict with any certainty where a rogue Indian dooms day weapons satellite is going to crash. You never really get the idea that this is happening but the idea of the global populace constantly travelling is great.

Will look out for this one.

Have had the soundtrack for years, but never managed to see the movie, despite the fact that I usually enjoy and make a point of catching Wenders' work.
Ancient Oriental proverb: "Correct the wise man and he will thank you. Correct the fool and he will attack you."
M

I think Anchor Bay planned to release the 4 hour cut on R1 DVD sometime this year but it's been put on hold - possibly cancelled!? Don't know why...maybe rights issues?

It was mentioned in the Home Theatre Forums a while ago and I don't think they had any more info except that it was going to happen and now isn't...anytime soon at least.

Looks like the Italian DVD is the way to go for now.

Just checked the Italian version out on that link. 4hrs 38mins!!!

Phew! Beats LOTR as a numb-bum job! Definitely fancy this but might wait to see what Anchor Bay have got planned for their version.

I've waited this long - a few months more won't matter.
Ancient Oriental proverb: "Correct the wise man and he will thank you. Correct the fool and he will attack you."
M

Had problems ordering this form dvd.it . They didn't have it in stock even though the website claimed they did. After about 4 weeks I got an email telling me I could wait for a couple of months or cancel my order . Which I did and they credited me back ( bit cheeky taking the money in the first place though).

However an Italian workmate of mine was good enough to get his sister to bring me over a copy. So at least I now have it!

Will let you know what I think of the transfer.
P

I've just come across these two excellent and informative sites, all about this weird, but jaw-droppingly ambitious sci-fi/drama/western!

Thanks Keith - will look forward to that.
Ancient Oriental proverb: "Correct the wise man and he will thank you. Correct the fool and he will attack you."

stop finding these movies please, it's costing me far too much
amazon.de always has the best stuff
No fewer than 70pc of young offenders in Britain are from single-parent families.
M

Out in May. I thought about waiting for this but thought I'd get the Italian version a lto quicker. I suspect the transfers will be identical ( as there is only one conformed copy of the ditrectors cut that Wender's has in his possesion: with the exception of the German soundtrack and subtitles).

The Italian one was £31 (not having to pay delivery).

This one has been long awaited! R1 I presume Keith?
Ancient Oriental proverb: "Correct the wise man and he will thank you. Correct the fool and he will attack you."

It's German, region 2
No fewer than 70pc of young offenders in Britain are from single-parent families.
M

According to Wenders there is unlikely to be a region1 version as Anchor Bay mucked him around when they were bought out by another company. There may be an Australian version at some point.

Look on the bright side ...the NTSC version would be even longer!

Assuming the transfers are the same (and I'm led to believe there is only one directors cuts master). Its quite clean if a little soft , not overly edge enhanced. Contrast is somewhat flat but depending on your point of view this can be a good thing.

oops
No fewer than 70pc of young offenders in Britain are from single-parent families.

Apologies for summoning the dark arts of thread necromancy but I've just had a wee search through the forum to find threads and conversations about this madcap film and this seems like the most relevant one. 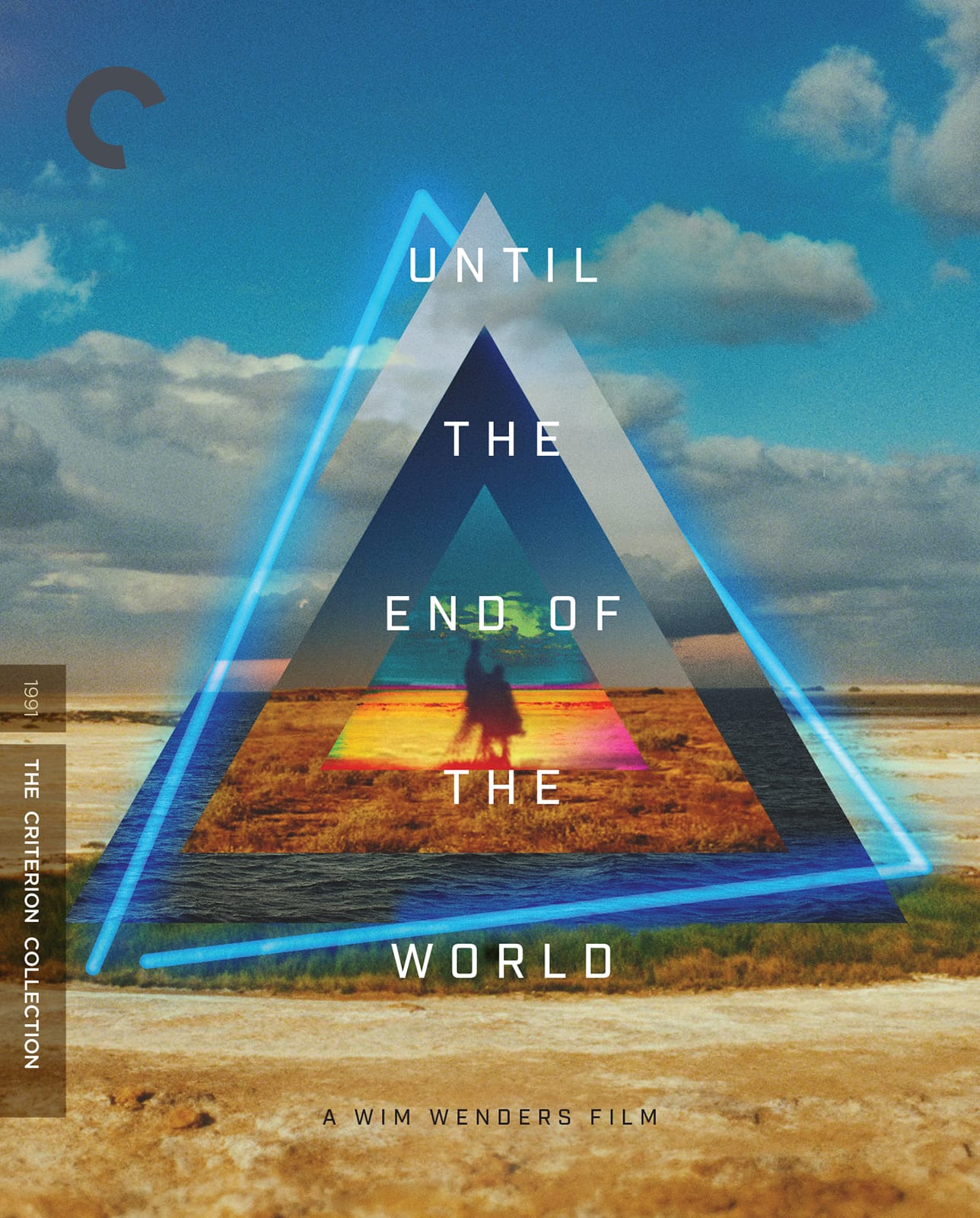 Until the End of the World

Conceived as the ultimate road movie, this decades-in-the-making science-fiction epic from Wim Wenders follows the restless Claire Tourneur (Solveig Dommartin) across continents as she pursues a mysterious stranger (William Hurt) in possession of a device that can make the blind see and bring...

Anyway, been slugging through the recently released Criterion Wenders-approved near five-hour edition of this film and loving every minute of it despite it having one of the flimsiest plots ever! Apparently he captured enough on celluloid to cut a 100-hour long film but had the decency to restrict himself to a mere 5 for the definitive edition! Those poor actors!

Only halfway through but was keen to see what others thought of the film on here. I've seen the two and a bit hour version before, back in about 2005 or thereabouts and loved it then, but this extended/pared-down version is so much fun. Wenders has made an odd hybrid film here. Sometimes it's a music video, then it attempts to be a story with characters and everything, before morphing into a travelogue or something! It's totally bizarre but entertaining somehow.

Think it was filmed in the late 80s, early 90s and released in 91 so some of the technology Wenders incorporates into the film is prescient (internet, social media, privacy issues, electric vehicles, and more) while some of it misses the mark entirely (fashions, politics, that sort of thing). It really captures that early 90s aesthetic so well and projects it into a Wenders-imagined future.

His muse, Solveig Dommartin, is alluring and mystifying in this despite having to prop up the bulk of a film that has hardly any plot. She had a captivating sort of beauty about her. Sometimes I don't find her attractive but then she suddenly becomes irresistible. The quintessential French beauty! She has good chemistry with William Hurt's techno-fugitive character.

Will leave a proper review once I finish it but felt compelled to get some thoughts down while I'm halfway through.

Its about time i updated my DVD copy do we know if that lovely Criterion is getting a UK release? as i can only find the Region A/1 Terminus Est
“by recognizing our uncanny strangeness we shall neither suffer from it nor enjoy it from the outside. The foreigner is within me, hence we are all foreigners. If I am a foreigner, there are no foreigners”
Ecosia - the search engine that plants trees The Ecosia Blog
You must log in or register to reply here.

For Sale Dances with the Dragons, But I'm a Cheerleader, Me, Myself & Irene, Rey, Tess, Juventas Story, TV Shows, Marvel, Bond, BFI & more
2