I never paid much attention to Peaches Geldof when she was alive but this guy was a hero when I was a kid. Lol. I imagine hundreds, yep, hundreds of 30 something men up and down the country are pretty devastated right now.

Yep, very sad indeed - just days after being inducted into the Hall of Fame, and the day after his first appearance on Raw for 18 years, in which he had some very haunting words about life, death and legacies...

Met him in 2005, he was so awesome to talk to. To say I'm gutted this morning is an understatement.
RIP Warrior, Always Believe 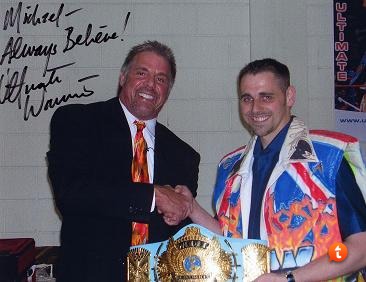 So so sad He was the reason I got into wrestling in the first place, I absolutely LOVED watching him fight. So young as well. Man this year has been a bit sucky so far
I sold all my AV stuff....don't know what I'm doing here!

Looked like a pretty healthy 54 year old. The stresses and pressure (plus some added chemical enhancements in some cases) obviously takes its toll over the years. Many of the guys I looked up to when I was a kid have passed away but this guy was the greatest.
M

pixelpixel said:
So sad. He looked fine at Wrestlemania ??????
Click to expand...

Strangely, watching Raw, there were one or two brief moments where I wondered "Is he ok?" - he just looked a little ... unsteady... but I put it down to nerves. 18 years is a long time to be away.

-gonzo- said:
It's kinda nuts and slightly spooky when you hear those words he spoke at Raw back again.
Click to expand...

Can't believe I woke up to this news, especially after see him appear on RAW last night.

Like others his feud with Hogan pretty much got me into wrestling, I can vividly remember discussing with friends at school who we thought was going to win their match at WM6.

Will be watching the Hall of Fame Ceremony tonight (On Sky Sports 3 at 6:00pm) will a totally different mind set now.

That last interview he did on raw makes you feel like he knew, which for me makes it even more scarier and shocking. I noticed aswell that he kept running out of breath, just had that feeling something wasn't right

TayWax said:
I guess until the details of his death are released we can't be sure if it was planned or just a really sad coincidence
Click to expand...

From what I read, it was a major heart attack which caused it

Then that is a very sad coincidence.

I used to watch wrestling back in his era, not so much now, and he was one of my favourites to watch.

Just noticed this thread, I was posting all over FB and other forums yesterday about this very sad news. I first discovered The Ultimate Warrior when I was 14 yrs old in 1989, pretty much hooked after that. I was a die hard Wrestling nut right up until my mid twenties and still keep up to date with it as much as I can now.

I used to travel all over the UK when WWF(E) toured over here in the 90's and we used to hang out at the Hotels where the wrestlers were staying and take pics with them, chat and even have a few beers with them

Was lucky enough to see Warrior face Macho Man at Summerslam 92 at Wembley Stadium, awesome show! it was watching Warrior that inspired me to pick up my first set of weights when I was 15 and train as a wrestler under Prince Cheema in Leeds in the early 90's (goodtimes)

The thing about Warrior that stood out from all the other wrestlers was he did everything on his own terms, he was never a yes man, he believed in his own set of morals and he took no S**t from anyone. He truly appreciated his fans too, he's send workout tapes to folks I know here in the UK who asked for any tips, autograph's etc at no charge.

Seeing him at The Hall Of Fame on Saturday night was fantastic, escorted out by his 2 young daughters and seeing his wife & mother in the audience was very touching. His speech was heartfelt and honest. Loved the fact he got to say his peace and hear the adulation from the fans once more. He also got to bury any senseless grudges he had with Hogan, Nash, Roberts etc...

On Raw he looked uneasy and even a little frail, he looked like he was in pain as he walked. This was quite noticeable and I'm surprised it hasn't been addressed officially. He looked stiff and was obviously struggling. Still feeling quite sad today thinking about it. I'm so pleased he got to go into the HOF and address the fans one last time, everyone stated how happy he was to be back home. I really hope he wasn't suffering too much.

Always Believe
"I can do anything, I'm the chief of police"

I sort of lost interest in wrestling a good while back, when we moved house and had no Sky TV etc.

I can still recall as an 8 year old kid using my original Gameboy to listen to the Ultimate Warrior music from the WWF game on repeat. Kind of an 80's ipod

Ive never really got the level of realism with wrestling, obviously as a kid you think its all real until you realise its not. However its the true stories I find fascinating, the off screen politics, and the sort of stories revealed in those wrestling uncovered type dvds. I actually ordered The Self Destruction of the ultimate warrior dvd today, although I think its official WWE so will no doubt have an angle to it.

Can anyone recommend any books that look at some of the off screen issues? That Benoit fella was just starting around the time I stopped watching I think, then years later I read he was involved in murder suicide.

However you look at it, 54 is no age for anyone to go.
Xbox and PS4 name: Fermanaghkopite

Like many of you, The Ultimate Warrior was the reason for getting into WWF. He really was just amazing to watch compared to some of the other big wrestlers.

Read that he was on Raw on Monday then a day later passed away. Bitter-sweet.

I loved WWF and some of early WWE but these days I have grown to detest the apparent historic use/abuse of PHDs, as hero's of my childhood fall. No idea what it's like these days as last time I tried to watch it, it was dull as dishwater but to me memories are being tainted and I can't help but think that Vince McMahon is rubbing his hands together at the thought of the money he can make off through the death of a Legend.

Fat_Tony said:
I actually ordered The Self Destruction of the ultimate warrior dvd today, although I think its official WWE so will no doubt have an angle to it.
.
Click to expand...

Oh that DVD has certainly got an angle on it.
It's main purpose was to rubbish Warrior as punishment as originally Warrior was asked to help with the production of the DVD, but as he refused to work with WWE they turned the tables and released this instead.
A lot of it seems very scripted as some of the words said are pretty much word for word the same between the bad mouthers, at one point you even see Ted Dibiase move the piece of paper he's reading from, and as for Rick Flair well he didn't even know what he was commenting on and just seemed to be bad mouthing because that's what he was paid to do.

A few wrestlers over the years have been on record saying this DVD was a cheap shot that was released for one purpose and one purpose only. Bret Hart said they tried to do the same thing with him while he and WWE weren't on speaking terms, but he caved in and worked with them on his DVD.

I'm not saying there's no truth in anything that was said, just it's very very biased (you'll have to make up your own mind on what you want to believe). Those that know anything about the history know which bits are BS, Gene Okerlands comments on crap ratings during Nitro is one of those.

I'd recommend getting hold of the Ringside Collectables Ultimate Warrior Shoot DVD to hear Warriors take on his career and former colleagues.
Last edited: Apr 10, 2014

I think I lost interest in wrestling when I grew older. Yes, I think I was about 5 or 6 when I decided it wasn't for me.
D

Had passing phases with the wrestling thing, British Bulldog, Shawn Michaels, Ultimate warrior, Hulk Hogan, Undertaker, all during my time , thought it was great, never really a super fanbut respected the crap out of the athletism and physiques .

Ultimate warrior was a great character, I can understand why his fans are gutted.

It's a much tougher gig than folks presume, just because it's fake doesn't mean that sh*t doesn't hurt.

I took my lads to a Wrestling.ie show last Friday, it was fairly pantomime but still very entertaining. We had ringside seats and the kids absolutely loved it. Some of you wrestling fans might have heard of Tiny Iron, apparently he is fairly well known - the fella was an absolute beast, all natural of course.....
Xbox and PS4 name: Fermanaghkopite

Hope he gets the proper treatment tonight, a 10 bell salute if nothing else. I hear WWE officials are with his family taking care of business for them, classy move.
"I can do anything, I'm the chief of police"
You must log in or register to reply here.

A problem I have with my Optoma UHZ65 Projector