Got this game yesterday from videogamesplus.ca so thought id write a review for those who dont have it yet and who are undecided as to whether or not they will buy it.

Fist place you start is the lobby. Nice clubhouse type of look with simple enough to use menu. Scrollbar at the bottom which has sports news flashing along it. I assume this is live scores as i dont really see the point otherwise. It showed things like golf, nfl and football info, but not being totally clued up on any of these im still not sure if they are live stats.

The game face mode looks like a great feature. Could not test this out tho as the ea servers online were down due to such high demand. The other way you to upload a pic is from a usb camera, which i dont have. Would have been nice if you could select a photo off of the ps3 hard drive.

The usual ways of creating your own golfer are all there and in great detail, so you can spend hours customising your golfer. A good feature here is that you can make changes all the way along your career, so your not stuck with a finalised golfer at any point.
As a bodybuilder i would have liked to be able to make the golfers legs bigger and had a vascularity scale to play with but thats being very picky i know!

The graphics in the game are great. Nice changes away from the previous edition of tiger, better animation etc etc. The sky can become a bit pixely at times, but for the amount of time the camera is aimed at the sky this is not worth worrying about.
The crowd are nice too. In full 3d and not the flat cardboard versions that i was used to on the ps2 and xbox. They also interact, so if they get hit with the ball then they hop around and hold the bodypart that got hit.Crowds in the stadiums are a bit strange, all standing up, folding arms and sitting back down in unison, but that doesnt affect gameplay at all.

The sounds are really impressive. Planes flying overhead or in the background sound realistic, and birds chirping away in different corners of your room is a great!
The commentators are there usual hilarious selves.

Ive only played this game for a few hours and the main difference i seem to have noticed is that to customise your characters skills you have to earn the respective skills. You cant just build up cash and buy the attributes you want. The cash has to be spent on equipment. So to build up power for example you have to complete good power shots in a game, or complete the relevant training courses.

So after only a few hours of play this may be slightly innacurate in whole or in part but hey ho!

Overall 9/10 - Highly recomended, if youve liked previous versions of the game then you will love this version. Definately worth getting, and lets face it.. sports games on ps3 are a bit thin n the ground at the moment so worth every penny!
7.2.2 Cinema Setup:
Receiver: Denon X4500h
Projector: Epson EH-TW7000
Sub: SVS PB1000 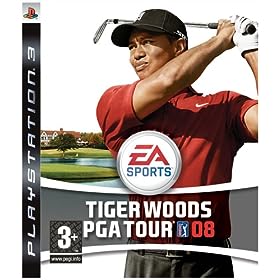 Please! As a courtesy to others; avoid posting any spoilers in your reviews.

A 10 should only be given for a landmark game that sets new rules, a 9 for a truly excellent game without flaw, and an average game that does things right but nothing special should get a 5 (not a 7 or 8 like some would have you believe).

With thanks for Durera for providing the format (makes sense to keep it consistent across AVF).

Is it out?
PSN: DelBoySmiffy

It's out now in US / Canada. 21st September I think for Europe.

Traded in TW2007 for this and I'm glad I did. Something wasn't quite right with TW2007, but this version seems a lot slicker and entertaining. The Tiger Challenge has veen revamped, with the challenges made up of a mix of short scenarios (3/4 holes) and rounds for the "bosses". New mini-games have been added, the menus have been improved, as has the online "GamerNet" side of it. You can now upload your best shots and challenge others to beat it.

Also new in this version is your golfers shot confidence, showing how confident he is on playing the shot based on previous similar attempts. There's also the introduction (return?) or the 3-click swing if you prefer the Hot Shots style, and a Game Face feature, allowing you to use a photo or webcam to put your face on the golfer. Haven't tried that yet, so not sure how well it works.

All in all, for me this is a big improvement over 2007. Not perfect - still a few graphical glitches (and you still cant skip the opponents shots) but getting there. 8/10 for me.. 8.5 if it was allowed!
A

can i ask a question to those that have it, online play, does it have a chat facility on it?
XBOX LIVE : avolee​

I have only just bought my PS3, after having a 360 for the last year but one of the first games I wanted was TW 08..

I loved 07 on the Xbox and was so impressed with the graphics and game play..

Unfortunatly, I have some mixed feelings on the PS3 version..

Personnaly, I don't think the graphics and look are any where near as that of the Xbox version - which I find very dissopointing. After reading countles articles on the PS3 being as good-if not better than the 360, the one game I want doesn't come close.

I would of expected a year after the previous title, this would of been the first thing Sony would of wanted to show about it's new console. Not having seen a PS2 version, I can only assume the graphic quality is no different - given the comparison against the 360.

But not eveything should be about graphics (well yes it should, but that is another debate for another time) so I have yet to play the game enough to comment on the game play - but assuming this hasn't changed too much and from the posts on here I'm guessing I wont be as dissopointed.

Now for the good bit - the game face is top drawer!! I was so surprised, as I really expected it to look pants, but it is very good. It does take a while to setup, but overall is well worth the input.


At this moment, I would rate the game 3 out of 5 (with 1 point being for game face feature alone). But with more play, this might change.

For anyone reading from Sony, releaseing a game that doesn't look as good as your main compititors - is not good for business. EA have been lazy with this release, so ensure you compare the 2009 version against the 360 version, before you sign it off!
You must log in or register to reply here.

S
My Trusty Panasonic TX-P50GT50B needs replacing - no idea what to get!?
2