Doesn't include his 2007 dramas Joe's Palace, Capturing Mary and A Real Summer
- they're available separately (A Real Summer is included with Capturing Mary)
and will presumably be in the next updated version of this boxset 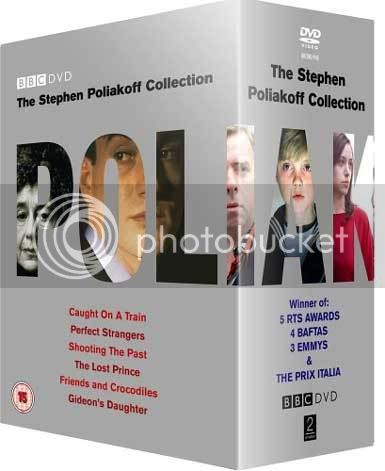 Includes: Caught On A Train, Perfect Strangers, Shooting The Past, The Lost Prince, Friends and Crocodiles, Gideon's Daughter.

The Lost Prince - Drama telling the little-known story of Prince John, the youngest child of George V and Queen Mary, whose short life spanned one of the momentous periods in history. Set against the backdrop of unprecedented upheaval in Britain, The Lost Pricne tells the very human story of a unique family and an extraordinary boy. Prince John was diagnosed as an epileptic and suffered from autistic-like learning difficulties making him unable to participate in public life and as a result he became increasingly isolated from his family.

Perfect Strangers - A darkly comic tale of a young man who comes face to face with his huge family - a variety of eccentrics, all of whom are hiding secrets from their past. At a family reunion Raymond is presented with a copy of the family tree and is absolutely amazed by the amount and complexity of his relatives.

Caught On A Train - Oscar winning actress dame Peggy Ashcroft stars as an elderly Austrian woman travelling across Europe by train who, over the course of one overnight journey has an unsettling influence on a young Englishman.

Shooting The Past - Winner of the Prix Italia, an extraordinary story about a country house on the outskirts of London which houses a unique photographic collection of the last century. Christopher Anderson is a representative of a U.S. corporation who plan on turning the property into a business school. But the staff who have cared for the photographs are determined that the collection should not be broken up and do everything in their power to keep the collection in tact.

Friends And Crocodiles - Paul Reynolds is a Gatsby-like figure: owner of a magnificent house, a host of great parties, and a collector of interesting people. He persuades Lizzie Thomas, a secretary in a local estate agent, to come and work for him as his assistant, to bring some order to his chaos. He inspires her with his enthusiasm and imagination, and frustrates her with his apparent carelessness and destructiveness, which culminates in her calling the police as a great party is turned over by local troublemakers, seemingly with Paul's tacit approval. But their paths are destined to cross again and again as Lizzie, with the help of some of those she met at Paul's house, rises through the changing landscape of corporate Britain. This is a story of a meaningful and powerful relationship that isn't a love story; it's about those rare people who profoundly influence and shape our lives.

Gideon's Daughter - Gideon Warner is a hugely successful public relations consultant to the wealthy, to politicians, to businessmen and rising starlets. Their hair, their clothes, where they go and with who - Gideon advises them on everything. With all his skills, he is the perfect man to package the Millennium celebrations and sell them to the rest of the world. But disillusioned with the world in which he works and increasingly concerned over the growing distance between him and his daughter, Gideon takes less and less notice of his business, just as clients seem to want him more and more. He clings to his slowly flourishing relationship with Stella - a mother grieving for her dead son - as his world spins further out of control. Only together can they make it stop...
Click to expand...


➤➤ Give Blood ➤➤ Tell us about it: Who gives blood?
➤➤ British Bone Marrow Registry​
W

Nice one Krish, pity it didn't include the aforementioned Joe's Palace. Michael Gambon was at his usual brilliant best, as were the rest of the cast. (I had to view it on a wonky 14" portable which alternated from monochrome to colour in Belfast)

Might give this set a shout though.....but where's the Monster Set got to?
When government doesn't agree with the people,
it's time to change the people

just back at home after 3 days away on business, and not a sausage, no RM red note ... though I did mention on that thread that I didn't expect to receive it before this w/e
"Whether it's a potato or a nut, it's a foodage!"

Was delivered today, looked like pic above, nice quality silver glossy 6-amaray 9-disc sturdy box (Perfect Strangers, Shooting The Past and Gideon's Daughter being 2-discers). Price / next best price hasn't changed since I posted this thread.

The amarays are the exact same six individually released titles which cost a fortune all together (just under £70 if my sums are correct), and you don't get a nice box to keep them in
- if you want to check them out individually, here they are:Btw, his 2007 linked films (not in the box) can be price checked here: - I'll wait for them to dip below £7
"Whether it's a potato or a nut, it's a foodage!"