A WWII caper directed by and starring George Clooney

Based on the book 'The Monuments Men' by Robert M. Edsel

In a race against time, a crew of art historians and museum curators unite to recover renown works of art stolen by Nazis before Hitler destroys them.
Click to expand...

Looks brilliant nothing like a good caper..with a very serious undertone..
Last edited: Aug 8, 2013
Terminus Est
“by recognizing our uncanny strangeness we shall neither suffer from it nor enjoy it from the outside. The foreigner is within me, hence we are all foreigners. If I am a foreigner, there are no foreigners”
Ecosia - the search engine that plants trees The Ecosia Blog

Looks good , big fan of Clooney as a director , Good Night and Good Luck was brilliant and Ides of March was solid so hope he keeps up the good work here.

Murray and Clooney? I got excited but judging from that trailer Murray is not gonna feature prominently. Still very interested in this.
Predator is the greatest movie of all time

Steve N said:
And what an under used or appreciated actor David Strathairn is.
Click to expand...

+1 on that , always give solid performances whatever he is in. 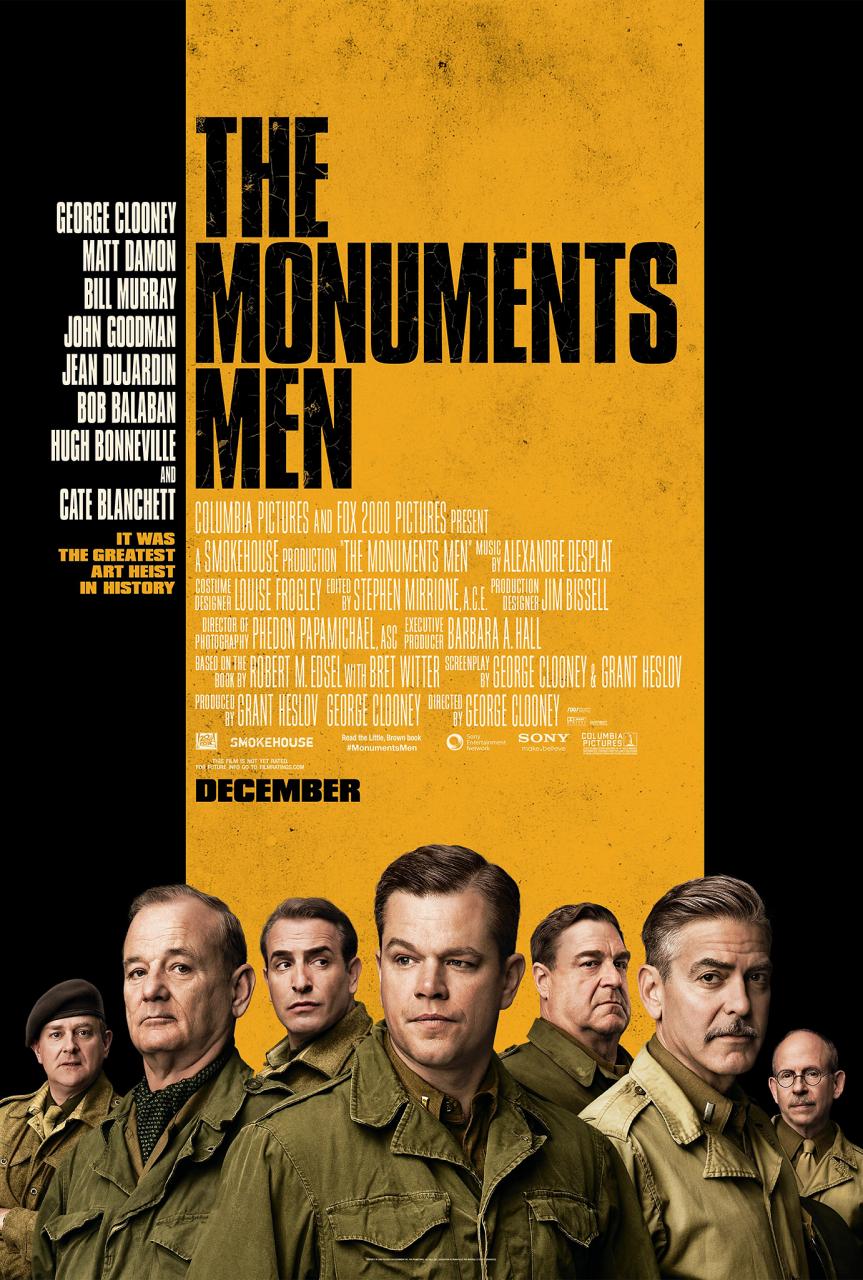 George Clooney's The Monuments Men Delayed Until 2014 - CinemaBlend.com
films ive seen at the cinema this year

^^ shame as its a very interesting story of the men who tried to save the history and art of Europe and beyond in what was the greatest heist in history. Judging by the casting this will go down the dark humour comedic route but it's still a story to be told and worthy of a film . Just a shame that many of the items weren't recovered still and will remain in private collections around the world to the highest bidder.
LG 55" E9 , Panasonic UB820 , Sonos Arc sounbar , Sonos Gen 3 Sub , 2 x Sonos One SL ( Surrounds) , Xbox One X. Sky Q, Netflix, Amazon Prime, Disney + 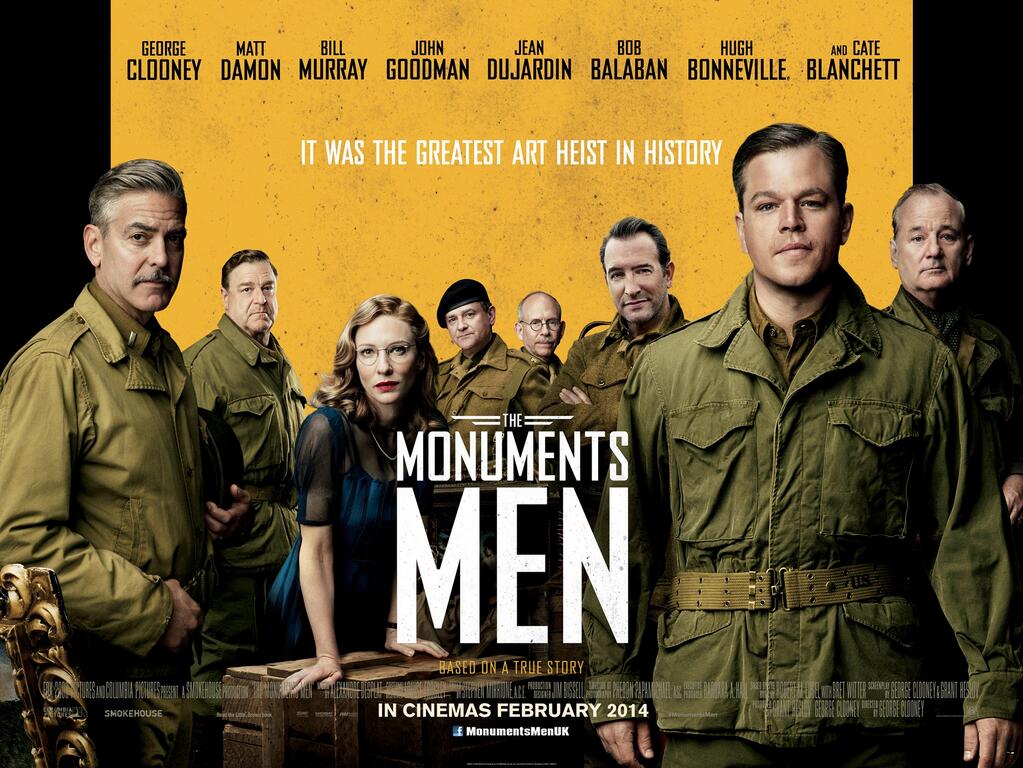 Does not look like critically it will do well, still early days;
The Monuments Men - Rotten Tomatoes

Just dreadful. It's such a shame because the actual story is quite interesting. The editing is a nightmare, it looks like it was chopped together. One minute it's a comedy, the next minute George Clooney is trying to win an Oscar with a dramatic, facial-close-up monologue. Overall it is really quite dull and shapes up to be one of the biggest disappointments of the year. 3/10
We'll defuse bombs, walk marathons
And take on whatever, together.

And a promo interview with Matt Damon:

The general consensus seems to be that the movie is underwhelming. I wasn't expecting anything spectacular, but the people involved made me believe we'd get a better film.

Thought it picked up in the 2nd half of the movie but it still felt a bit disjointed.

Pretty forgettable. Bit of a shame for such an A list cast.

Well I went to see this today and I was very much looking forward to it simply going by the quality of its cast, the movie poster and the synopsis given in Rai's first post. I hadnt seen the trailer, so I was expecting something along the lines of Dad's Army going to war to pull an art heist. I hoped it would be something fun like The Sea Wolves, Kelly's Heroes, The Dirty Dozen, Where Eagles Dare etc.

And I would say it pretty much set out to be that sort of film.

But it doesnt succeed in entertaining anywhere near those movies I mentioned.

Its tone was mostly light hearted and breezy but I had problems with it, right from the first act. With all those vintage war films, I mentioned, we got an exposition on the characters. Here, nothing. The team is gathered literally in a montage right from the get go followed by a training/planning segment that was meant to entertain but just totally failed to engage me. That was a major problem because later on in the film there are several moments that tries to induce emotional responses but I couldn't connect, I felt nothing. I want to feel something, I wanted to really engage with these characters but by and large, the film wont let me

I hate to say it but much of it was very boring. Its meanders along without any sense of excitement, tension and when there are supposed to be thrills, they are first of all sign posted, then executed blandly culminating with a dampening pay off. It tries to be poetic at certain moments but again, I just don't feel it. Which is a crying shame because I absolutely love the story its telling. Brave old non-combat men (played by likeable ageing stars) entering the war zones with a sincere passion to protect the heritage art of Europe...come on what's not to like about that synopsis, it positively excites...yet, it doesn't, why?! It hurts to think of its missed opportunities.

So thank god for Cate Blanchett. She is the only actor/actress capable of elevating what is quite frankly a mediocre film into something more richer. There is a rapport between her and one of the main stars that really engaged me which even that was so botched up, nevertheless, was the highlight of the movie for me. That's all because of the the brilliance of this elite actress to transform her ordinary dialogue into a glass of the finest wine.

Clooney, Damon, Murray, Goodman, Bonneville and the French guy (whom I recognised from The Artist) are all likeable and turn on their charm to the full to overcome their limited material but ultimately, with the exception of Bonneville, they don't quite have the chops to compensate as well as Cate. I singled out Bonneville because his was the only character that I really got absorbed with and that is thanks to his ability to draw my attention and feelings. I really like this actor, even though I haven't seen him deviate much from his roles in Downtown Abbey and the 2012 Olympics satire.

I've been mostly negative so far because the film fails in so many areas, however it does still have its merits. The story is one. Its a wonderful story. Some "facts" are thrown about which very much intrigues me enough for me to investigate the real historical truth. The star power DOES help. If wasn't for them, the film would probably be even more flat. There are some moments that did actually shine including some some tense moments but none of that tension reaches any crescendo, it just tapers off. Finally, more importantly, despite all its flaws, the film does manage to drive successfully, the message of how important it was to try save the artwork.

What a shame, this could have been so much more. Its a worthy film with good intentions but it fails in too many areas and lacks proper structure.

Unlike the masterpiece art treasures our protagonists sets out to rescue, historians in the future should not even think of risking their lives to save this film reel.

Pretty much agree with the above...the best thing about this film is all of the archive photgraphs of the actual people which pop up as the end credits roll.

There were so many opportunities wasted here. Scenes which could have been absolute dynamite but fell completely flat because of the terrible pacing, lack of direction and editing of the film...I'm thinking about the "have a cigarette" scene, the record-playing message from home scene and the race horse scene in particular.
We'll defuse bombs, walk marathons
And take on whatever, together.

Solomon Grundy said:
Pretty much agree with the above...the best thing about this film is all of the archive photgraphs of the actual people which pop up as the end credits roll.

There were so many opportunities wasted here. Scenes which could have been absolute dynamite but fell completely flat because of the terrible pacing, lack of direction and editing of the film...I'm thinking about the "have a cigarette" scene, the record-playing message from home scene and the race horse scene in particular.
Click to expand...

Yeah you've picked the right scenes which could have had so much more impact. Clooney may have had great acclaim with his previous directorial efforts but they were all arthouse political movies, its clear from this, that he has much to learn with directing "an adventure" style movie.
PSN: THEYCALLMETEJ(hit me for table tennis, pool etc in VR!) OCULUS/META: YouCanCallMeTJ
Telescopes: Celestron Nexstar 8SE, Equinox 80 (My Astrophotography)
Consoles: PS5(Disc), PSVR, Oculus/Meta Quest 2, Xperia XZ Premium, Virgin 200mb fibre
A/V: Panasonic TX-LXXDT65B 55" 3DTV, Yamaha RX-V767 A/V, 7.1 speakers,
H

Don't often get the chance to go to the cinema these days, but saw this last weekend and thought it was okay but no more than that. It feels all very gentile and very sunday afternoon. Interesting subject but not particularly very well told by Clooney et al.
Why don't you knock it off with them negative waves? Why don't you dig how beautiful it is out here? Why don't you say something righteous and hopeful for a change?