Write your own review for The Lighthouse
Movie Review Co-ordinator
The Best Blu-ray and Movie Resource AVForums Movie Reviews Bookmark it now!
My opinions expressed here are not necessarily those of the AV Forums or the associated websites

Slinkywizard said:
Definitely my cup of tea, despite the weirdo aspect ratio which to me is more distracting than tone-setting.
Click to expand...

I don't mind different aspect ratios, as long as I know that they are coming. It is a bit distracting spending the first ten minutes of a film wondering whether the cinema has made some kind of mistake with the projection!

Interesred in this, but i'll catch it at home. Director Robert Eggers' next film has a much bigger draw for me - Viking epic The Northman!

I disagree with Cas about the symbolism because I don't think that's the point. Yes there's some fancy word play but in the end it's a very simple story about two troubled men initially choosing to be together, eventually being forced to be together in a claustrophobic setting. It's basically a pressure cooker, a slow burn until the pressure is released then all hell breaks loose.

Now I think about it, the ending does seem a bit left field, but when I watched it, it didn't feel out of place.

Thanks for the Review, Cas. Sounds intriguing, but at the same time, not my regular type of Movie. Maybe one for me to watch on an otherwise slow, Stormy Day, when in the right mood.
LG 55B7 OLED / Denon AVR-X1400H / LG UP970 / ATV 4K

It's certainly not got mainstream appeal but the performances and direction is very compelling. For me the cinematography deserves an oscar over 1979. The aspect ratio at time just lends it self so well to the dark foreboding and shadowy scenes. I'd love to see this on an OLED
Video: Panasonic 65" DX902, Optoma 230EX (upgrade soon!), Samsung UHD Spinner, Nvidia Shield TV, Nintendo Wii-U
Audio: Denon x4200, Rotel RMB1575, Kef R700 fronts, Kef R600 Centre, Kef R100 rears, Cambridge Audio Minx 22 Atmos, Arendal Sub1
Opinions expressed by myself are not necessarily those of AV Forums

Cineworld are only showing this in Crawley, Glasgow, London & Milton Keynes, so no cinema trip for Lucas . Looking forward to it eventually though.
2020 in film , A24 Films seen

I really rather enjoyed this. It's as mad as a fish in places but somehow it all worked with the claustrophobic camera pressing in on Dafoe and Pattinson's stellar organic performances. The mix of the old world with Wake and 'his ways'; involving steadfast rules, drunken sea shanties and superstition fed tradition, set against the new with Howard and his attempting to escape both the and his past grate upon each other finely.
I agree, Cas, this is filled with symbolism from the basic prison labour-like island lighthouse setting to the haunting drawn out visions the men suffer - though Howard's are revealed to the viewer, whilst Wake's remain shrouded in mind but visible in his action.
Definitely a film to imbibe to, just to set the confused scene and fire up some subtitles (if you choose to rent/buy) so you can get all the old time dialogue and sing along like a drunken seagull.
Oh, yeah, an OLED really works well here what with the shades of black to white which, I'd imagine, could leave some LCD's needing panic disorder medication.
You're acting like a snail on a wet Friday.
S

Thanks for the review Cas,my US blu ray came a few days ago,still haven't had a chance to watch it yet,will try over weekend
Flickr: simonblue5502's Photostream
S

Thanks for the review as always Cas. Intrigued with this and like others, will probably wait for a home release. Thought the Witch was ok but not convinced this will be much better, despite the universal praise it's getting. One for a quiet night in I reckon.
“To learn who rules over you, simply find out who you are not allowed to criticize.”
M

I liked it better than the Witch and it has the right balance of real "horror" and Lovecraftian/Greek/seafaring mythology madness.The Blu-Ray is very good(decent sharpness and deep blacks) and the cinematography is really superb,as well as the direction,the acting,the sound design,the soundtrack,the editing and so on.The aspect ratio?It suited the mood of the movie,but i think that scope would be better.
Home Theater:JVC DLA-X7000,Samsung UE55JS9000,HTPC,Zappiti Mini 4k HDR

lucasisking said:
Cineworld are only showing this in Crawley, Glasgow, London & Milton Keynes, so no cinema trip for Lucas . Looking forward to it eventually though.
Click to expand...

ICYMI this is showing at Southampton Odeon, should you fancy a Meerkat Movies daytrip...

From Robert Eggers, the visionary filmmaker behind horror masterpiece The Witch, comes this hypnotic tale of two lighthouse keepers on a remote and mysterious New England island in the 1890s.

Absolutely thrilled to bits with this movie.
I watched it last night and spent all of today thinking about it.
Can't wait to sit down with it a second time with all my ruminations.
A solid 9/10 from me in the common parlance.

My full thoughts are in my user review and elsewhere on the fora.
Malingo - Kinja / The AV Club
Malingo - Letterboxd

Great use of sound in this film, kinda enjoyed it in a "this is bizarre!" but compelling sorta way.

Just read all the trivia on this film on IMDB, some interesting stuff: 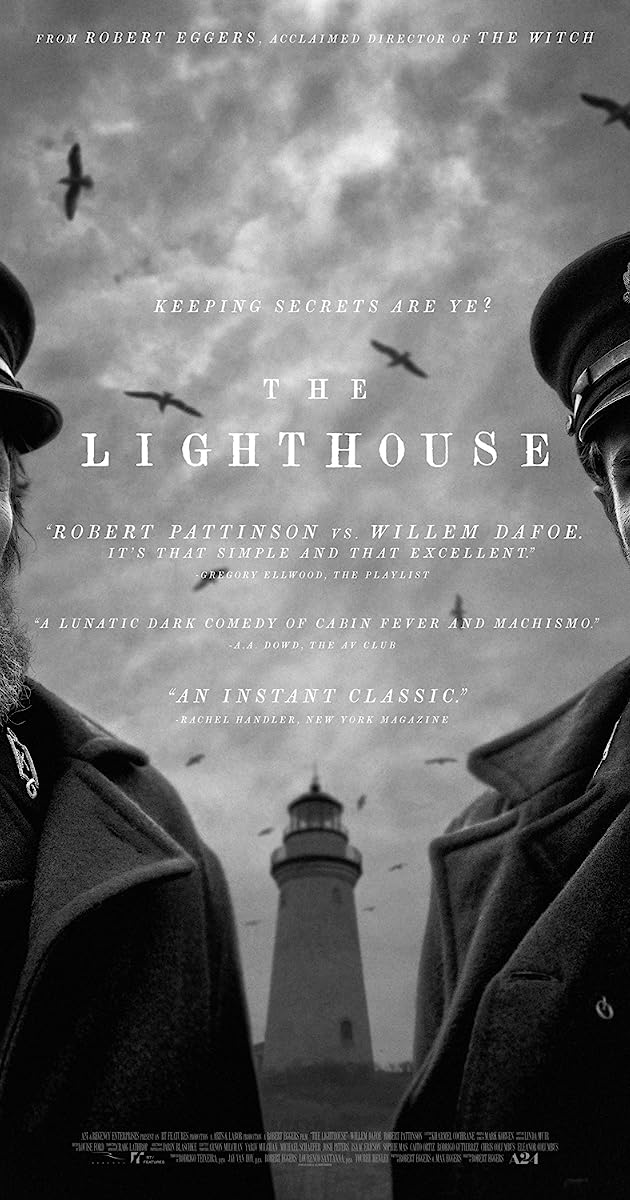 The Lighthouse (2019) Trivia on IMDb: Cameos, Mistakes, Spoilers and more...

I'll never get the two hours of my life back that was spent watching this...

Looks like this is getting a wider release at multiplexes this week, so might give it a whirl... could prove to be a good double-billing with Birds of Prey!