The Evil Dead - Book of the Dead

Apologies if this is the wrong forum.

Today I bought the Anchor Bay R2 Book of the Dead, and I suspect that the disc included is the wrong edition for the book.

The Evil Dead logo is in blue, and unlike two I have seen on Ebay, it does not say "Uncut edition" on the disc.

Can anyone verify this?

You're probably better off posting this in either the DVD or Movie related forums.

Either that or PM - Phil Hinton or Garrett, they are the fonts of movie/dvd knowledge.
Woody
C

I had just been ordering a stick vaccuum cleaner for a friend on Amazon and thought I would check on your query. There seem to be a few versions produced.

Available from these sellers.


Note: you may purchase only one copy of this product. New Region 1 DVDs are dispatched from the USA or Canada and you may be required to pay import duties and taxes on them (click here for details). Please expect a delivery time of 5-7 days.


Do your bit for Comic Relief. Amazon.co.uk is the exclusive stockist for The Catherine Tate Comic Relief Special DVD. Click here to support Red Nose Day and buy this limited edition DVD.


You will need a multi-region DVD player to watch this Region 1 disc. Browse our selection here.

Would you like to update product info or give feedback on images? (We'll ask you to sign in so we can get back to you)

This is item 1 in The Evil Dead Series.

Amazon.co.uk Review
In the Autumn of 1979, Sam Raimi and his merry band headed into the woods of rural Tennessee to make a little movie called The Evil Dead. They emerged with a roller coaster of a film packed with shocks, gore and wild humour, a film that remains a benchmark for the genre. Ash (cult favourite Bruce Campbell) and four friends arrive at a backwoods cabin for a vacation, where they find a tape recorder containing incantations from an ancient book of the dead. When they play the tape, evil forces are unleashed, and one by one the friends are possessed. Wouldn't you know it, the only way to kill a "deadite" is by total bodily dismemberment, and soon the blood starts to fly. Raimi injects tremendous energy into this simple plot, using the claustrophobic set, disorientating camera angles and even the graininess of the film stock itself to create an atmosphere of dread, punctuated by a relentless series of jump-out-of-your-seat shocks. Much of the film's energy is supplied by the "Raimi-cam", a gliding, swooping, rushing camera that suggests a dislocated, otherworldly point of view while injecting a lively if spooky fleetness to the pace. Though it's no comedy, Raimi's dry wit and cinematic cleverness pervades the entire film. The Evil Dead lacks the more highly developed sense of the absurd that distinguish later entries in the series--Evil Dead 2 and Army of Darkness--but it is still much more than a gore movie: it marks the appearance of one of the most original and visually exciting directors of his generation, and it stands as a monument to the triumph of imagination over budget. --Simon Leake, Amazon.com

The Evil Dead would have been nothing without its over the top gore and blood, The acting is crap, as with the picture quality and the special effects. But the sort of people who did watch this film and didnt mind the violence are probably the sort of people who dont have a film in their collection without these things!
So the film was a hit, but not to the censors, so this was put on the video nast list and banned! (this was also one of the main five most controversial films on the video list along with The Texas Chainsaw Massacre, The Driller Killer, I Spit on your Grave and Tool Box Murders!)
There have been 2 sequels, both (especially part3) have been nowhere near close to surpassing the origonal! Its unique blend of horror and gore has seen that it is to this day famed as one of the most well known zombie/horrors of its kind!
The blood in this film is also well known for bieng as thick as jelly! And looking like jelly! And bieng the colour of (strawberry) jelly! Whatever it is it isnt blood! But the more the better! And The Evil Dead doesnt dissapoint!
And now it comes in this amazing set! Not only does itr come in the coolest box a DVD has ever came in (this reffers to you even if you dont even like gory horrors), it is also packed with loads of extras!
For all gore fans and NOT FOR 'ANTI GORE' PERSONS OR HATERS OF CHEESY B-MOVIES!!!!!!!!!!!!!!!!!!!

Was this review helpful to you? (Report this)

GIVE ME SOME SUGAR BABY /This edition did it/, 7 Oct 2005
Reviewer: Miroslav Ilko "DEADITE" (SLOVAKIA, EUROPE) - See all my reviews

It is all about the packaging, and this is one of the best Anchor Bay packages, if not the best at all, and the August/2005 release of The Evil Dead - Book of the Dead comes as a 2dvd set with the second disc inserted along with booklet into the paper holder on one of the pages of the book. The 2nd disc contains the movie RUNNING TIME starring Bruce Campbell, it is a 66 minutes long feature shot in one continuos shot, /such as A.Hitchcock's The Rope /USA 1948/,EnglishD2.0+DD5.1+DTS5.1/
There is already a BOOK OF THE DEAD edition of the second EVIL DEAD /Evil Dead 2 - Dead by Dawn 1987/, currently available only in the USA, it has a new design /face on the book now has teeth/ and it is supposed to have a VOICE CHIP /like Shrek 2/ activated by poking into the right eye /a scream or something should come out/.
So long ASH fanatics and give it up for Mr.Tom SULLIVAN, the genious who designed both books and all the stuff in the evil dead movies. G R O O V Y

Hey, Spinach chin, Ive had 2 versions and they both had the uncut old cheap ones in. Not seen one with the blue anchor bay in it although its perfectly plausible.

and it is supposed to have a VOICE CHIP /like Shrek 2/ activated by poking into the right eye /a scream or something should come out
Click to expand...

I never noticed that and I dont think its true.
Once again, suspended for nothing

are both the 'uncut' versions.
Once again, suspended for nothing

So you think I should take it back to the shop?

post a scan of the disk!
No fewer than 70pc of young offenders in Britain are from single-parent families.

Batista, looks like you have the same as me (I ordered mine from play.com a while back). However it did come with an extra disc of a short movie called Running Time. 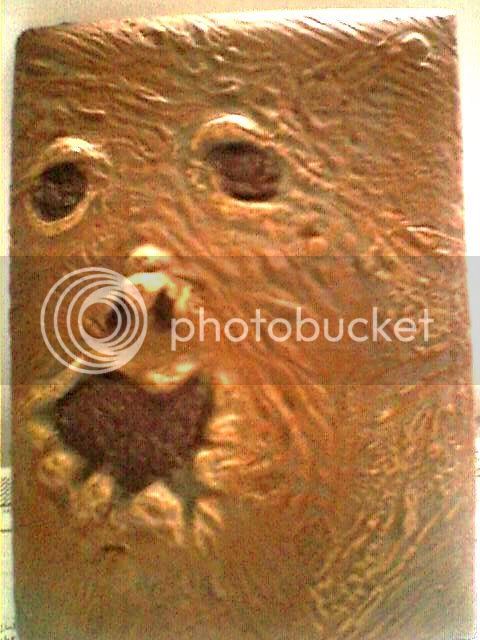 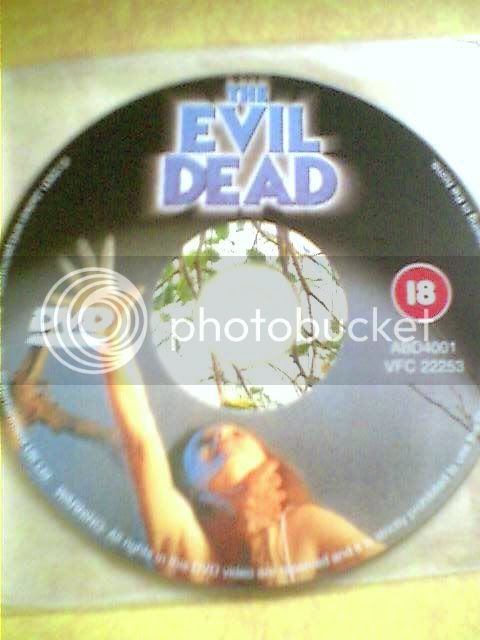 Yeh, exactly the same as partyweb.

woodywizz said:
You're probably better off posting this in either the DVD or Movie related forums.

Either that or PM - Phil Hinton or Garrett, they are the fonts of movie/dvd knowledge.
Click to expand...

Just Movies and tv but thanks for the compliment

PS will be moving this thread to the Movies and DVD secton later on.
My opinions expressed here are just that. That gaff is dyslexia
Ruby Quartz Shades. Well, what would you prefer! Yellow spandex? Oh and Logan Stay Away From My Girl.
What's a Magneto? You Homo Sapiens & Your Guns. When Will These People Learn How To Fly.
​

Thread move from GC
My opinions expressed here are just that. That gaff is dyslexia
Ruby Quartz Shades. Well, what would you prefer! Yellow spandex? Oh and Logan Stay Away From My Girl.
What's a Magneto? You Homo Sapiens & Your Guns. When Will These People Learn How To Fly.
​

I've got the Book of the dead and also this version... 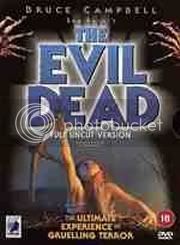 I am sure that I got the 'uncut' disc you wanted in the book of the dead... Not that it helps you much..

I would expect that the 'Uncut' disc you want is in the case I have shown. Another of my Evil Dead versions... Which According to DVD profiler is a Renaissance Pictures, Anchor Bay Entertainment released on 03/09/2001 EAN: 060020-620195 82minutes long.... But I'm not sure there's much difference TBH.

If my memory serves me well, The Evil Dead on DVD hasn't been released in a "Cut" form in the UK. There was a video edition that was trimmed IIRC, but I think the "UNCUT" moniker has only been used due to the notoriety behind the movie as the most prolific title around the video nasties era.

That seems to be backed up by Wikipedia here..

Because of its graphic violence, the original version of the movie was banned in several countries, including Finland, Iceland, Ireland and Germany. The "tree rape" scene was also decried by some as being misogynist.[citation needed] In Germany, the movie's release was hindered by public authorities for almost 10 years. Original 1982 cinema and video releases of the movie had been seized, making the movie a hit on the black market video circuit with pirated copies abounding. Several high-profile horror enthusiasts publicly criticized the German ban on the movie, including author Stephen King (who gave it a rave review in the November 1982 issue of Twilight Zone). A heavily edited version was made legally available in 1992, but the first legal, uncut version of the movie did not enter the German DVD market until 2001. In Finland, The Evil Dead was later released uncut on DVD by Future Film, and rated K-18. In the United Kingdom, the movie was one of the first to be labeled a video nasty in the mid-1980s and was finally released uncut in 2001.
Click to expand...

The 2001 releases being the first UK DVD versions AFAIK, and they do have the tree rape scene in. I'm still horified by it now..

And this bit made me laugh...

In one scene early in the film, the characters appeared to be smoking marijuana. In an example of "self-censorship", the shot was abandoned because the actors used real cannabis which made them unpredictable. However, in the initial shot of the group in the cabin, smoke from the cannabis scene is still visible
Click to expand...

The Book Of the Dead version has the DVD inside which is mainly black with red 'Evil Dead' text and Ash's face. And has "full uncut special edition" written on it in white... As shown here. 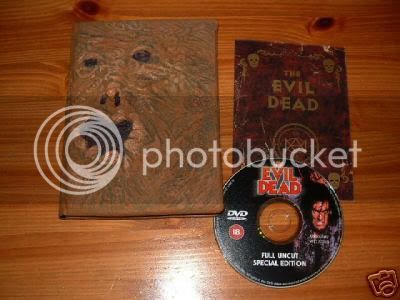 My other version as I posted above includes the other disc with the blue 'Evil Dead' text as shown here.

It doesn't state that it is the 'full uncut' version on the actual disc but it does on the case (just below Dead) as said above it is AFAIK the same main feature, even if the extras may be slightly different...

INSOMANiAC said:
Hey, Spinach chin, Ive had 2 versions and they both had the uncut old cheap ones in. Not seen one with the blue anchor bay in it although its perfectly plausible.


I never noticed that and I dont think its true.
Click to expand...

Just for info, its the evil dead 2 book that has the voice chip in it
You must log in or register to reply here.

J
Tidal and classical music - time to try it?