Thought I'd share a few piccies of my H/C setup at our home, which is also a B&B!
We moved to Wales last year and i got a few new toys as a treat for me when i moved down. I have added a few new bits since, but mostly its the same as when we got here.
Our main issue was the fact that the cottage is an 1850's stone workers cottage, so no straight lines and everything is stone!
So i couldn't use many cable pins etc as trying to hammer nails into stone walls result in cracked plaster, bent nails and not a lot else!
So i had to use plastic conduit in some places
and as i haven't been allowed to chase into the walls as i did at our last house, we have a lot of exposed cables, bit of a shame, but easily liveable with after a while. The OH wasn't happy with how many holes i drilled anyway, never mind chasing cables too!

So, here are some pictures. Apologies for the poor quality, i couldn't be arsed to get the dSLR set-up and which lenses etc, so got the ol' point-and-shoot out and used that 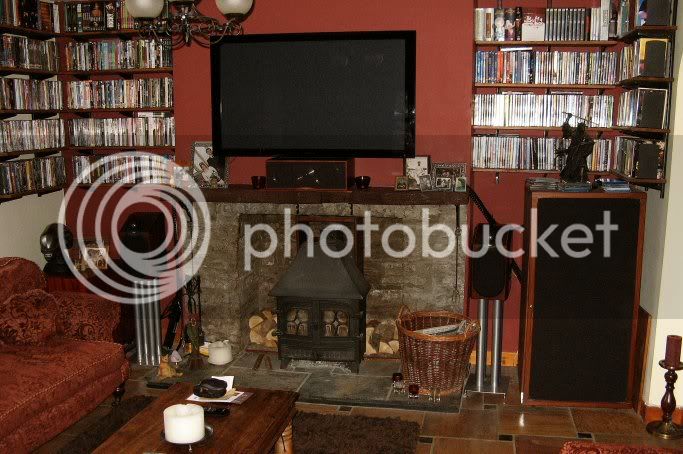 Here is a shot of the front section. As you can see, the front of our lounge is dominated by a woodburner in a large brick/stone fireplace. This immediatly restricted where i was going to put my Plasma (Pioneer LX5080D) It had to go above the fire. Now i know some of you hate having screens high up and above fireplaces, but i didn't have a great deal of choice. The viewing angle is not too bad, and when we have film-night sessions with friends, it's helpful for those who sit behind the main sofa (I put our second sofa as a row behind the main one!)
The first thing we had to put up was the mantlepiece. This is a massively heavy piece of oak from a local reclamation yard. It was a beam of a church roof, but the beams were left standing in water in this yard. So we had it cut to length and brought it home. It weighs more than i do and took three of us to lift! Once sanded (only the top, back and bottom), treated and stained, we then put it in-place on the two main brackets. we had to add a second set of brackets as it is so heavy! Then put heat sealant at the back at the join of the wall as the fire gives a LOT of heat out during use in winter. The centre speaker (B&W CM Centre) was chosen to fit the gap between mantlepiece and Plasma. I did have the matching B&W CDM-CNT centre speaker, but this sat too high and proud and i would have had to have had the Plasma much higher. The CM Centre speaker tonally matches my other CDM speakers very well, and was a lot slimmer. This centre speaker sits on a small stained piece of board as a gap in the mantlepiece where the beam used to fit another beam, leaves a cut-out section which heat would have travelled up to the speaker.
My sub (SVS PB-12 Ultra) is over on the left and my front two speakers are B&W CDM-1NT's. The big cabinet on the right has all my equipment in and i made this myself! You'll see in a later picture how shoddy my woodworking skills are! :lol:
Then there are lots of quick and easy shelves for all my films (DVD's at the front of the lounge)
By the way, the weird wooden thing behind the fire is just a quick support I knocked up to stop stacked wood touching the burner's chimney as it gets vv hot and smokes.
So, pic 2... 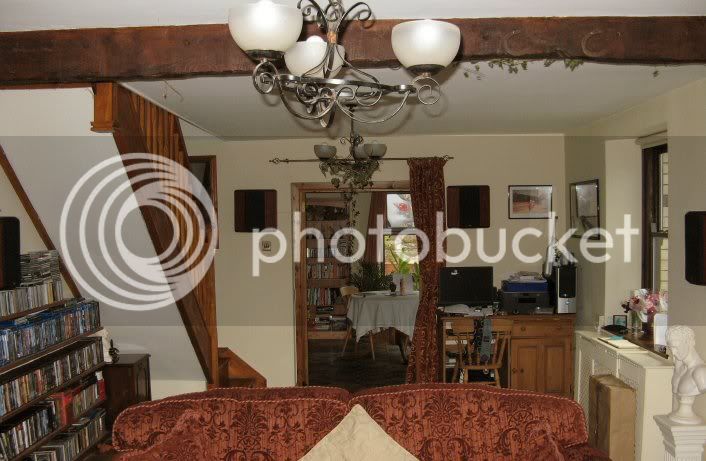 Here's a shot of the room from the screen looking back. It's a 7.1 system and you can just see the two side speakers to the left and right. All four surround speakers are B&W CDM-SNT's. 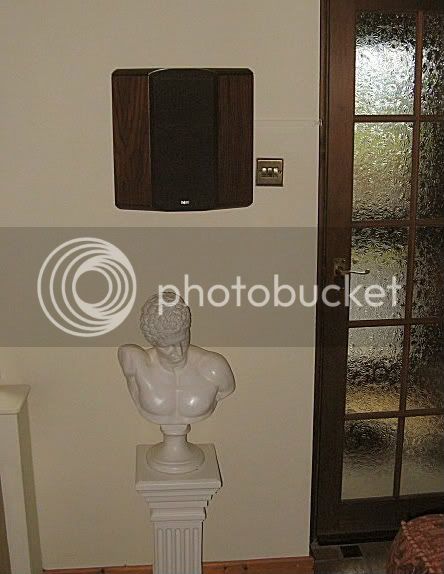 As you can see here, i have had to use some plastic conduit to run the cable round the wall, before running it around the door frame and along the floor. The floor throughout the ground floor is large stome tiles, so i can't even run cables under carpet! 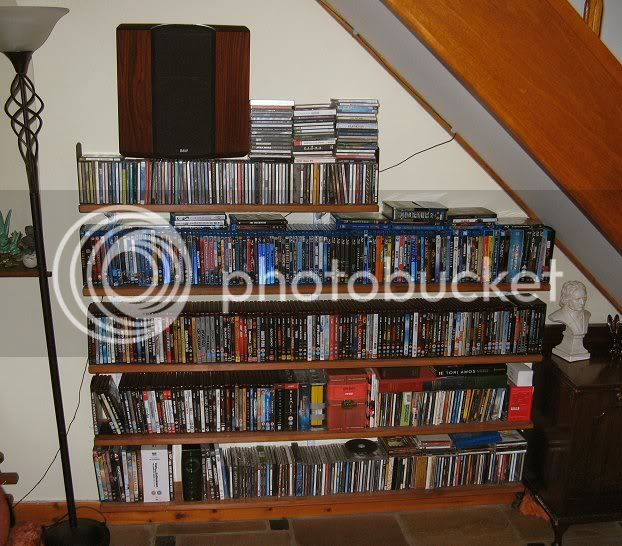 This is the other side speaker sat above more shelving. All my BD's and HD-DVD's are on here. As you can see, this speaker is under the stairs. The sound is not too badly affected by the stairs thankfully. The rubbish cable in this shot is not A/V related, but is for LED lights that run along our wooden beam woven in the ivy up there. I kind of gave up hiding cables by then! 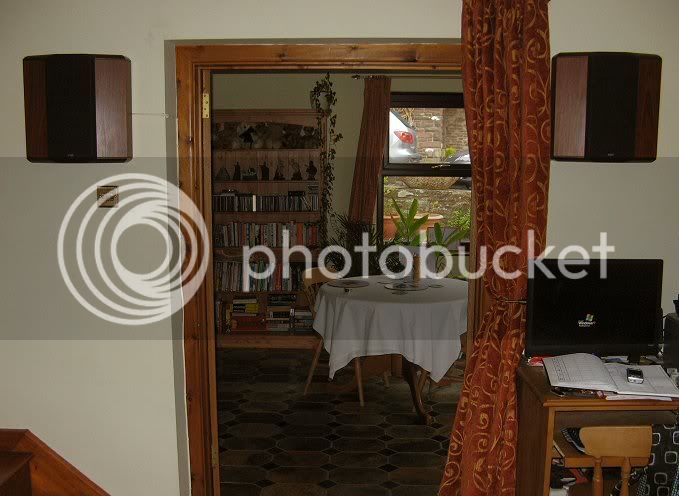 Here are the rear two speakers to make the 7.1 up. The room beyond is the breakfast room for our B&B guests (plus my bookcases!) Please excuse my messy office desk on the right!
The curtain there is blackout lined, as is one that goes over the doorway. The door to the kitchen which is glass has a roller blackout blind and both windows also have blackout blinds, so i can sit and watch films even in bright sunlight and its pretty dark! 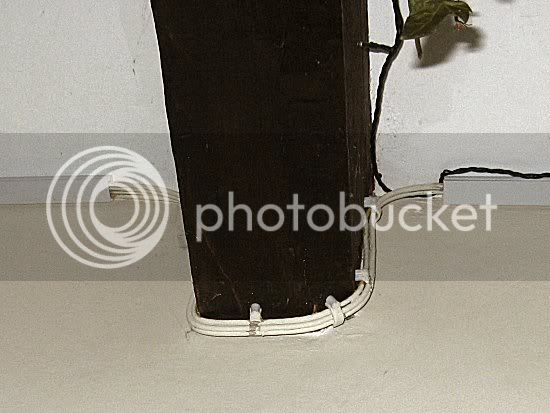 This is the kind of messy D.I.Y. that i do!
Had to run the rear speaker cable through conduit stuck to the ceiling and nailed by cable run clips onto the beam itself. 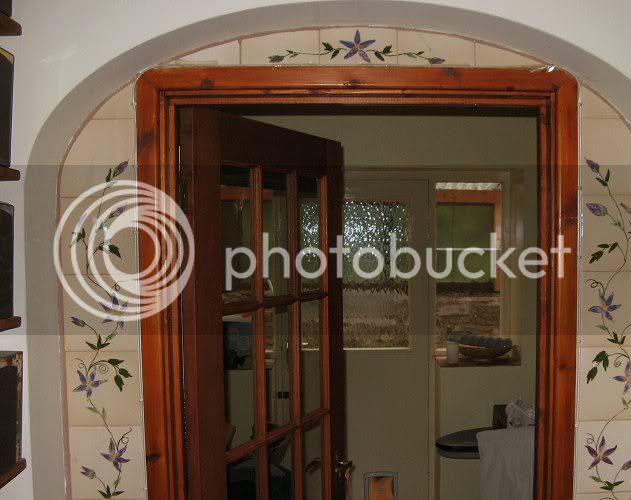 Bit better here with the cables going round the doorway into the kitchen. But still not ideal (You can see the steam press in the kitchen which i seem to be on all hours at the moment pressing sheets for guests!) 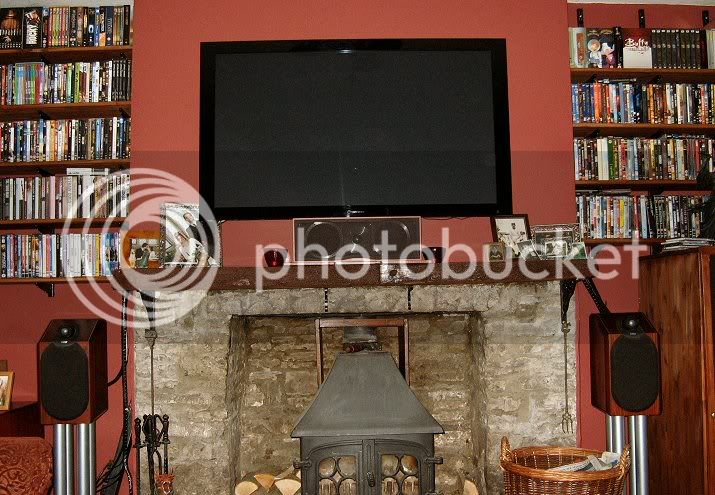 This is the rough view from the sofa. Its a real shame about all the cables you can see, but i wasn't allowed any drastic room surgery! I have also fitted four of the LED lighting rods behind the screen. 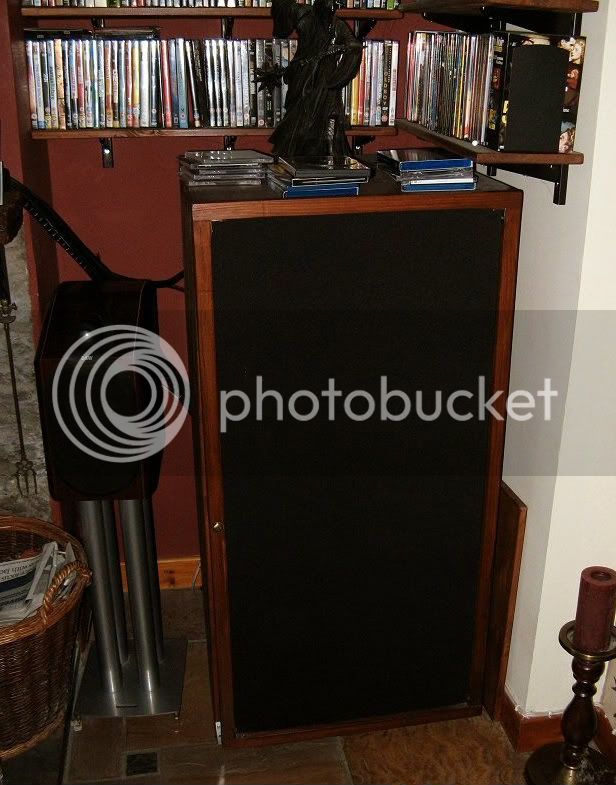 Here is my home-bodged cabinet. I did try and find something that would fit with it needing to be taller than wide. I had a lovely wide cabinet at my old house, but it would not fit
I did get some quotes for someone to build me something, but they were astronomically expensive! So i decided to build my own. Did a rough design and measured my equipment etc. Cut some wood, stained it and built it! I have zero joinery skills, so i stuck it together with blocks, screws, braces etc. Its wobbly as hell, but does the job!
Speaker cloth from Maplins is stretched over the frame for a door. This keeps the light coming out from all the display led's etc to a minimum, but lets air flow through it and the remotes work through the stretched cloth 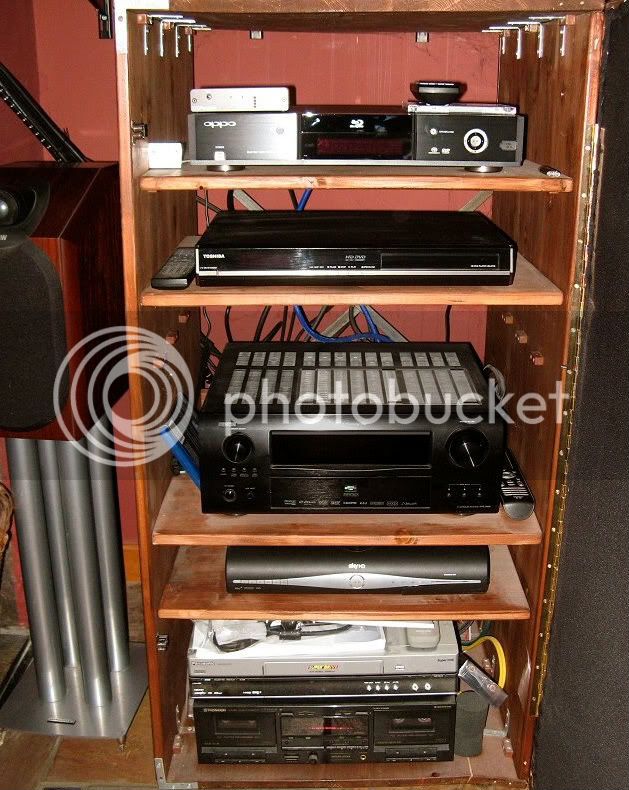 here's it with the door open. You can see the cross brace strips of metal I added at the back as it was super-wonky without it!
The equipment top to bottom is:

You can see how much dust it collects in here! Should get the wife to dust in there more often! 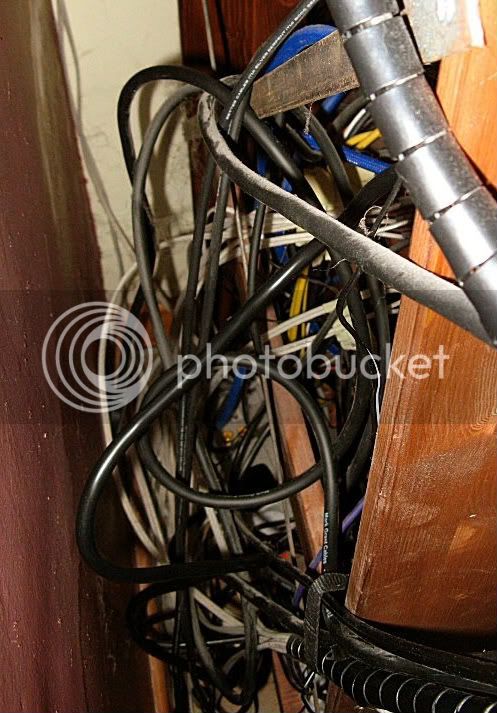 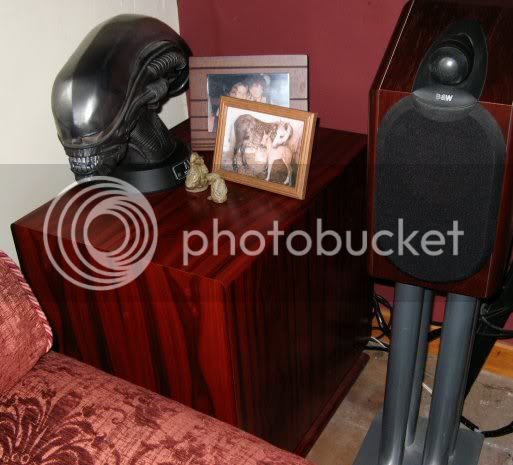 The sub had to go in the opposite corner and was colour approved by the OH
The wife isn't too happy with the alien head, or the Wraith King statue on my cabinet!
The 8033 has made a great difference in taming the boomyness of the Sub, sounds great now! 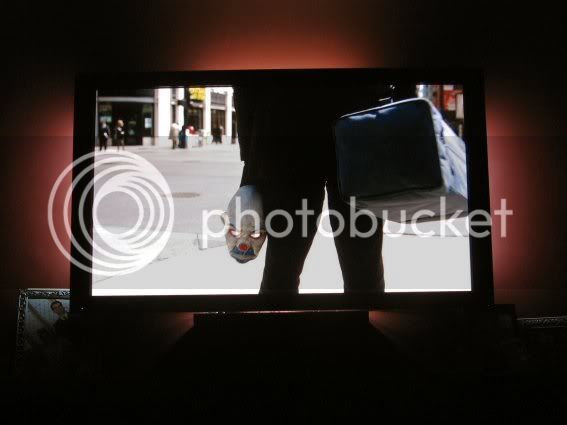 Here's it in action! LED lighting on, Dark Knight playing
Not the greatest pic to show how good it looks, but i had it all ISF'ed by ******** and the combo of the 8G Pio & the Oppo is just heavenly 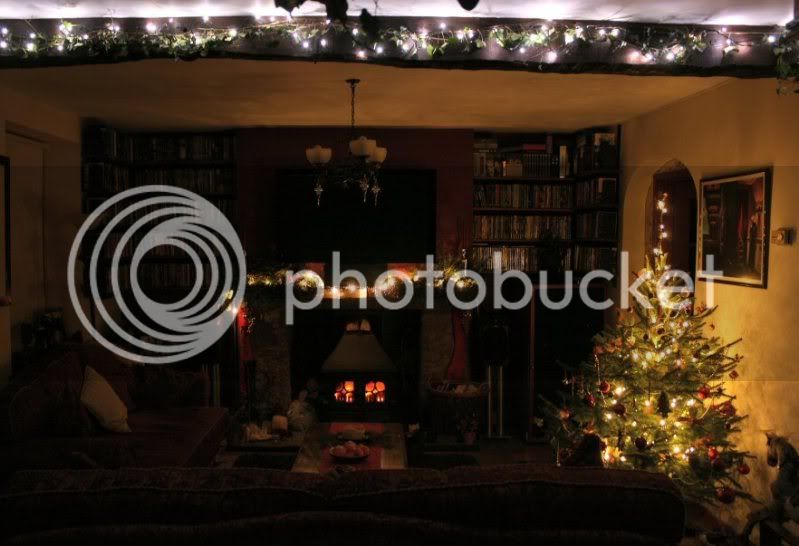 and here's an 'aaahhhhhh' shot of it setup with all the chrissy decs and the fire going! (you can see the LED lights in the ivy along the beam i said about earlier)

Hope you enjoyed the brief look at my setup at our B&B
Last edited by a moderator: Jul 4, 2009

Nice setup. It' s not easy going HC in a period place with character.

lechacal said:
Nice setup. It' s not easy going HC in a period place with character.

Do the guests enjoy your sub?
Click to expand...

It's very rarely on when guests are here
L

Lovely setup, period buildings are fantastic. They might not have the cleanliness of modern setups, but they also lack the sterility and have a lot more character. The dark wood speakers and cabinet really compliment the room well. And of course B&W, Pioneer and Denon pretty much guarantee it is going to look and sound extremely good!

It's funny how people often joke on here and ask "can I come and stay with you?", whereas in this setup we actually can!

Anyway, congratulations on a really good setup, I hope one day I can have something like that, I really do love the exposed stone and dark wood!

PS: I thought your equipment rack was a giant speaker at first lol.

You have an impressive amount of Blu-Ray movies but surely you must own nearly every HD-DVD movie ever produced!

the cabinet does look like a huge speaker - someone who came along once thought it was the sub! Can you imagine how loud that would have been?

Most of the HD-DVDs were all 2.99 jobs from hmv or cheapys from inetvideo - i did go a bit bonkers
You must log in or register to reply here.