Sunday out in London,

AVForums Sponsor
Here a handfull more from my day off yesterday out in London. Lovely afternoon. I posted one last night which is called Candid street photo with a WARNING as it's rude, ish. So I wont link to it here. You can go click on it on main photo thread if you want. rest of the nonrude ones are here though.

We went to take some photo's of the Turbine hall at Tate Modern but it as closed for work. So I took this IR shot outside with my camera on a post on pavement. It was over a minute exposure I think so only the two figures by the railing appear. The place was pretty busy with lots of folk milling around but as they never stayed in front of the camera long enough none of them are captured.


BMX bike boys were all over the place doing some very cool tricks. I couldn't find a photogenic backdrop around this point to get good pics. Pity as they were well cool. 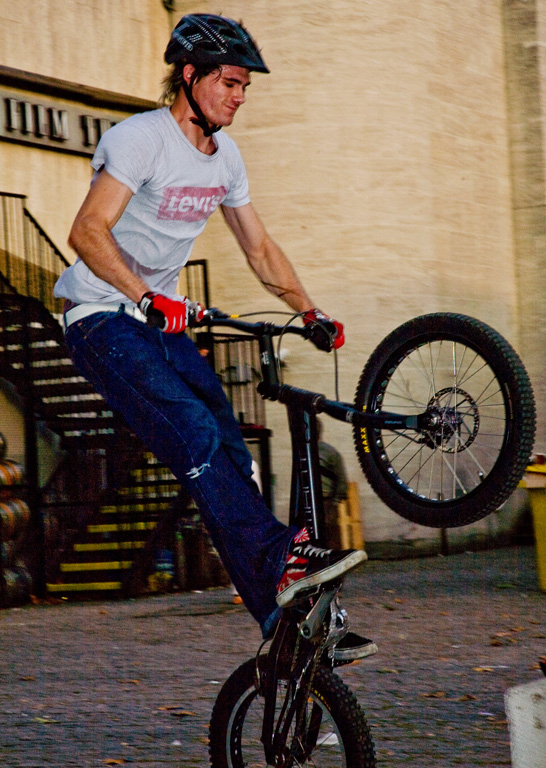 Skateboarders were around alot as well. This chap didn't seem to be able to complete alot of his tricks. In the end he went mental at me and asked/shouted at me to stop flashing at him (no-one else's flash photography semed to irritate him...ooh er missus....I obliged as soon as he asked of course. I never hung around to see if he suddenly improved. 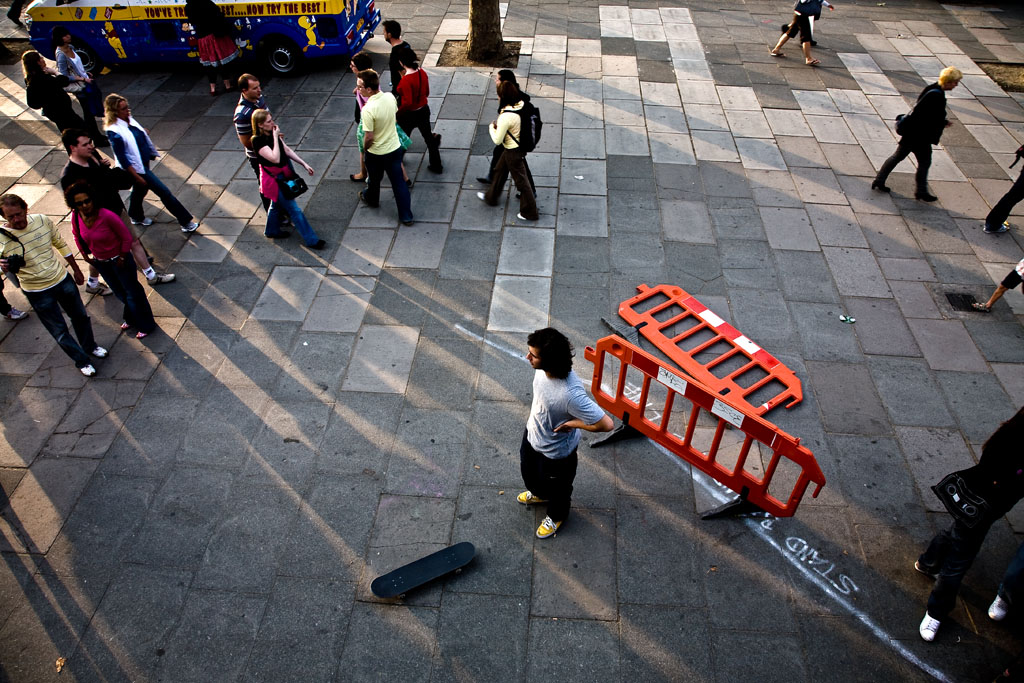 This chap was pretty good at the tricks though. 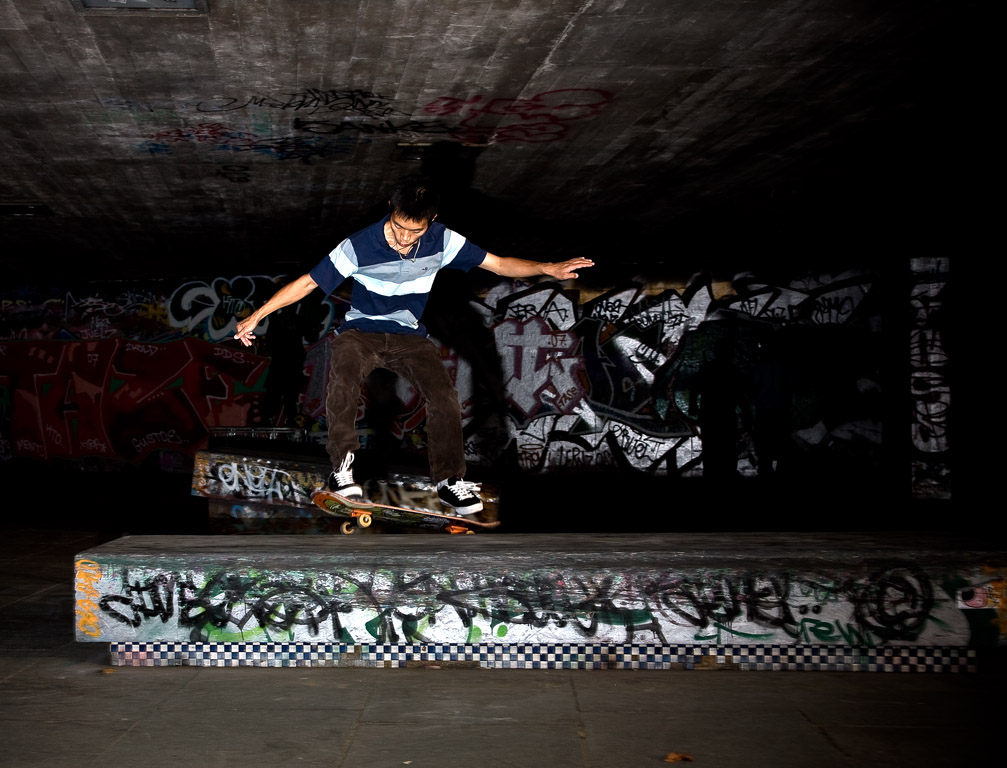 The last pic is a top one Gordon, but where have his rear wheels gone??

Looks like you'll need a 1Dmk3 if you are getting into this action photography stuff.

As for the guy who complained, you should have said you were shooting for "Skater Magazine" and he'd have just loved you to stay.

AVForums Sponsor
The wheels are over the edge of the concrete block. He was doing one of those tricks where they come at the block at speed, flip board up and grate along the edge, then flip it back down or up on to top surface.

1st and last for me Gordon. The third doesn't say much without the narrative and it's a shame the wheel is cut in the second. What processing did you do on the last shot?
Samsung Galaxy S3
Flickr Blog

First and last for me also

I really need to spend a day out in london taking shots, only 40 minutes away and something i've never done...
Xbox Live Gamertag - Giz 76
R & P Design <-- My Website of Work
Flickr

It's the last one for me - I quite like the high contrast processing. Might have been nicer to get a little closer with some wide angle action as well.

In the first, I find the blurred figures just a little to distracting. The contrast appears to be a lot flatter all the way along the railing.

Gordon @ Convergent AV said:
grate along the edge, then flip it back down or up on to top surface.

I think the technical term is ollie up to rail to 50:50 grind to kickflip off.

But i like the idea of skateboarders grating!! that sounds better!!!

Last one is my favourite also - nice work.
My opinions expressed here do not represent those of the AVForums or its associated websites
V

yup another vote for the last one......Ignore people like that skater...if they feel they have the right to tear up our streets and public places,then we have the right to photograph them doing it....oh and I used to be a skater....The shock on my 14yr old nephews face as I land a kickflip180 the other week was a picture

vulkan75 said:
oh and I used to be a skater....The shock on my 14yr old nephews face as I land a kickflip180 the other week was a picture

theres still life in the ole boy
Click to expand...

Heh me too. I broke both wrists during the summer of 89 when we got our first half pipe.

But I dare say I could still pull off a kick flip.

Just back in after a day of work.

The IR one to start is of Melanie and her friend Kev. I just thougth I'd put it in for comment. I thought it interesting that this is a scene that is shown ALOT on photo forums...but usually at night.

The last image of the skateboarder is just normal raw conversion. I undexposed the background and used off board flash 430ex held camera left.

Liquid101 said:
Heh me too. I broke both wrists during the summer of 89 when we got our first half pipe.

But I dare say I could still pull off a kick flip.
Click to expand...

Ah yes! I remember my first drop in well..which is why I stuck to street

You couldnt just break one Huh!You had to go one better
Nasty

vulkan75 said:
You couldnt just break one Huh!You had to go one better
Nasty
Click to expand...

The first was trying to pull a method air, broke my right wrist - 8 weeks in plaster, then 2 weeks after I got out of the cast, I tried to pull an ollie alli-oop about half way up the ramp.... came down very hard, (favouring my left arm) my wrist snapped. I did 19 straight weeks in fracture clinic. My mum wasn't happy.

AVForums Sponsor
Couple more to be going on with. 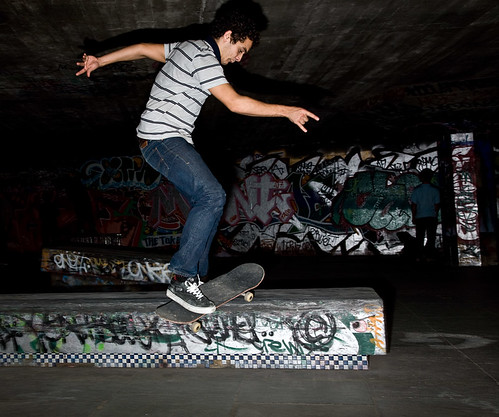 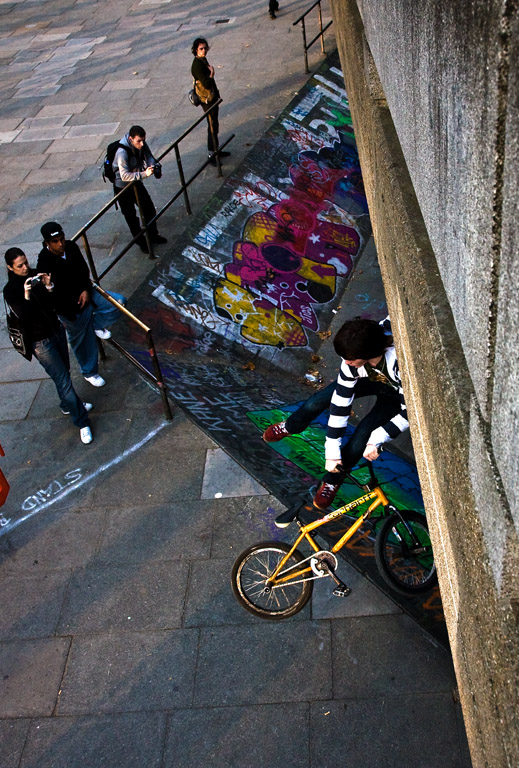 The background underexposure thing is coming on v.well Gordon. Creative flash use is something I'll have to get a handle on.

The last skater pic is very cool. Interesting angle on the last bike guy but it looks a bit flat and you cant see how high the guy is jumping so it loses something as a result. Lower down wide angle would be cool.

I like the fact you can just see the weird spray dude in the back right of the skate pic, but you can't seeif he is looking out or at wall.

The bmx pic was a last minute thing. You can see the crowds had all gone and so had most of the bike boys. I was just sitting beside Melanie at a terrace bar and decided to look over and see what was happening. I think a forum meet in London and a walk around that area would produce some class work from everyone.


PS. Got some more from Portobello I need to work on....and I'm thinking on how to capture your car....and bike....
ISF Calibration since 2001
Lumagen Expert _ Ultimate Video Quality
***B-STOCK! Radiance Pro's plus trade in AV KIT. just in**
You must log in or register to reply here.

Phone Repair - where do I stand?