HULU & BAD ROBOT are to adapt 11/22/63, the novel by Stephen King, about a time traveler who attempts to prevent the assassination of President John Kennedy, which occurred on November 22, 1963, into a TV miniseries.

“ON NOVEMBER 22, 1963, THREE SHOTS RANG OUT IN DALLAS,
PRESIDENT KENNEDY WAS KILLED, AND THE WORLD CHANGED.
WHAT IF YOU COULD CHANGE IT BACK?”


Event Series Based Upon the Novel by Stephen King

LOS ANGELES and BURBANK, Calif. (September 22, 2014) — “On November 22, 1963, three shots rang out in Dallas, President Kennedy was killed, and the world changed. What if you could change it back?” Hulu is about to take viewers on a journey to find out in 11/22/63, a new Hulu Original series from J.J. Abrams’ Bad Robot Productions (Person Of Interest, Fringe, Lost), acclaimed author Stephen King, executive producer/writer Bridget Carpenter (The Red Road, Parenthood, Friday Night Lights) and Warner Bros. Television. The announcement was made today by Craig Erwich, Senior Vice President and Head of Content, Hulu.


Based upon the best-selling 2011 novel written by King and published by Scribner, 11/22/63 is a thriller in which high school English teacher Jake Epping travels back in time to prevent the assassination of President John F. Kennedy. But his mission is threatened by Lee Harvey Oswald, his falling in love and the past itself … which doesn’t want to be changed.

A nine-hour event series, 11/22/63 has received a direct-to-series order from Hulu, and the project marks the first original programming collaboration between Hulu and WBTV. J.J. Abrams, Stephen King, Bridget Carpenter and Bryan Burk are executive producers of 11/22/63. Carpenter will write the teleplay, based on the novel by King. Bad Robot’s Kathy Lingg is co-executive producer, and Athena Wickham is producer.


Craig Erwich said: “J.J. Abrams and Stephen King are two of the most celebrated storytellers of our time, and we are excited to be working with them and Warner Bros. Television to bring this unique take on one of the most seminal historic events of the twentieth century to Hulu. 11/22/63 already resonated with audiences as a best-selling novel, and we are looking forward to bringing the riveting story to the screen.”

Stephen King said: “If I ever wrote a book that cries out for long-form, event TV programming, 11/22/63 is it. I’m excited that it’s going to happen, and am looking forward to working with J.J. Abrams and the whole Bad Robot team.”

J.J. Abrams said: “I’ve been a fan of Stephen King since I was in junior high school. The chance to work with him at all, let alone on a story so compelling, emotional and imaginative, is a dream. We are thrilled to be working with Hulu on this very special project.”

Bridget Carpenter said: “Stephen King is one of my literary heroes. Creating this miniseries from his extraordinary book is a dream come true. My dad, a lifelong Stephen King fanatic, still cannot believe it.”

Stephen King is one of the world’s most successful writers, having published more than 50 books in an illustrious career spanning 40 years, from the publication of his first novel, Carrie, in 1974, through to the upcoming November 11, 2014, release of his latest, Revival. 11/22/63 was named one of the 10 best books of 2011 by The New York Times, named one of 10 books we loved reading in 2011 by USA Today and honored as an example of notable fiction of 2011 by The Washington Post. King’s works have been adapted for theatrical motion pictures and television more than 50 times, including projects such as Carrie, The Green Mile, Maximum Overdrive (which he directed himself), Misery, The Mist, Pet Sematary, The Shawshank Redemption, The Shining and Stand By Me, to name just a few. King is also currently an executive producer of the CBS series Under the Dome.

J.J. Abrams is currently at work writing, producing and directing the highly anticipated feature film Star Wars: Episode VII, and he is also producing the next installments of the Mission: Impossible and Star Trek movie franchises. Abrams’ Bad Robot Productions is best known in television for its hit series Felicity, Alias, Lost, Fringe and Person Of Interest, among others.

Hulu is a premium streaming TV destination that seeks to captivate and connect viewers with the stories they love by creating amazing experiences that celebrate the best of entertainment and technology. As we pursue this mission, we strive to continue to redefine and reinvent the TV-viewing experience.

Warner Bros. Television (WBTV) is one of the entertainment industry’s most respected providers of original content, producing award-winning drama and comedy series for broadcast network television, cable and digital platforms. As of September 2014, WBTV is producing and distributing more than 30 primetime series, with multiple programs on each of the five broadcast networks, in addition to shows on cable’s HBO, TNT, Showtime and Cartoon Network’s Adult Swim. WBTV’s broadcast network series include The Big Bang Theory, Mike & Molly, Mom, 2 Broke Girls, Two and a Half Men, The Mentalist, Person Of Interest and Stalker for CBS; The Middle, Selfie and Forever for ABC; Gotham and The Following for FOX; Constantine, The Mysteries of Laura, A to Z, One Big Happy and Undateable for NBC; and Arrow, The Flash, Hart Of Dixie, iZOMBIE, The Originals, Supernatural, The Vampire Diaries and The 100 for The CW. WBTV’s cable series include The Leftovers for HBO, Major Crimes for TNT, Shameless for Showtime, and Childrens Hospital and Newsreaders for Adult Swim.
Click to expand... 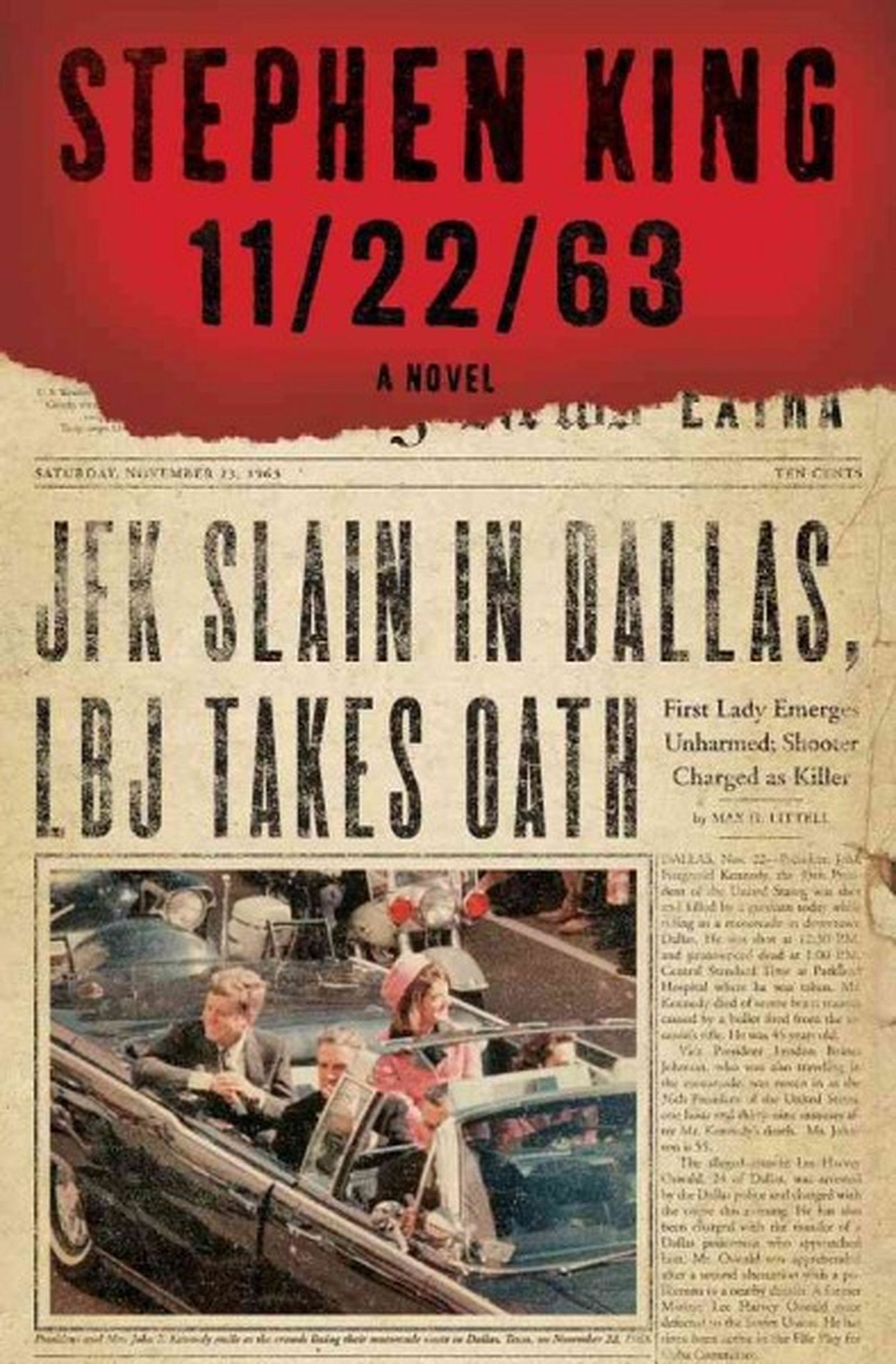 Very interested in this, one of King's best books for many years with great potential for a tv show.
Listen

kav said:
Very interested in this, one of King's best books for many years with great potential for a tv show.
Click to expand...

+1 though I've not finished the book yet but love the period.
Lots of silver and black stuff - 2 x Harmony One's

There was an episode in the Twilightt Zone that had this plot
Full plot here and video below voice ba.

My opinions expressed here are just that. That gaff is dyslexia ​
M

Really enjoyed this book, hopefully they will do it justice!!

James Franco (127 Hours, The Interview) cast in the lead role as Jake Epping.

The problem with King adaptations is the endings very rarely translate well to the screen. I have a feeling this one will also struggle, although I hope it doesn't.
Promise me, Ned.

Looking forward to seeing this, I've not read the book.
For help and advice with calisthenics and bodyweight training at home feel free to join my new faceboook group JAVE Calisthenics
ClickMe

Disclaimer : If you make a purchase after clicking one of my links, I may make a small commission.


The first two episodes (9 in total) to be directed by Kevin McDonald (The Last King Of Scotland, Touching The Void).
M

I have my eye on this too. The book is one i have been meaning to read, but not got round to. Now i will wait till after this has broadcast i think.
​
​

Looks promising, i quite enjoyed the book.
Promise me, Ned.
M

Do we know when and where this will screen in the UK?

Nice trailer. Think I'll watch the series and then read the book. Really looking forward to this though.
​
​
M

Anyone catch the first double episode yet? Looked good and having read the book some interesting differences. WIll be sticking with this one

Hoping this pops up over here sooner rather than later.
​
​

Very enjoyable pilot so will definitely stay on board to see how it pans out over the next couple of episodes,loved the attention to detail along with the performance’s especially James Franco who really fits into this role perfectly.
Favourite films seen from every year (1920-2017)
2021 ranked (UK)
You must log in or register to reply here.

The Hitchhiker’s Guide To The Galaxy (Hulu)