The ancient St Govan's Chapel is perched precariously on the cliff at St Govan's Head, at the most southerly point of the county of Pembrokeshire, West Wales. The tiny Chapel dates from the 13th century, but an altar and a seat inside, carved from the rock face may have been carved as early as the 6th century. Huddled among the rocks, almost at sea level, it is only accessible by climbing down approximately 75 steep steps. Curiously, it is said that when counted, there are a different number of steps when walking down, compared to walking up. Believe it or not, this is true - I was born and bred in Pembrokeshire and have visited the site on many occassions and each time, the number of steps down differ to the number of steps back up! I still can't work out why! It was built on the site of a holy well that once attracted pilgrims. The small cell inside is formed from a fissure in the rock face. Legend has it that this first opened to hide St Govan when he was being pursued by pirates. It opened again to release him once the pirates had left. It is said that if you make a wish while standing in the fissure it will come true, provided you don't change your mind before you turn around. Outside the chapel there is a large rock boulder known as the Bell Rock. The legend is that St Govan was given a silver bell which was stolen by pirates from it's bell tower. St Govan prayed for its return and angels retrieved it and placed it inside a rock where it would be safe. St Govan used to tap the rock which gave a note a thousand times stronger than the note of the original bell.

So there, a bit of Welsh history for you, to go with the photograph......! 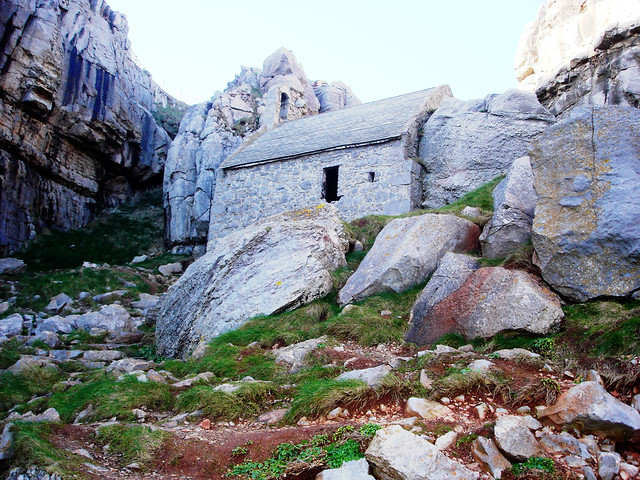 Nice capture. Although I was born and lived in Pembrokeshire (Milford) I never visited St Govan's. Some amazing countryside down there
W

welshtommo said:
Small world..........I'm from Milford too. Born in Withybush but raised in Milford until I left for work in 94. My parents and other family are still there.
Click to expand...

Same as me then - born in Withybush left Milford in 1969, still have my brother and relatives down there but only visit once a year these days.

Sorry for going off topic !

Anyway, I was down in Feb and had a wander around the docks , sorry Marina , took a few snaps. Milford is pretty dead these days though. However there is some wonderful countryside with loads of photo opps.
W