I'm posting this just for discussion as I'm interested in people's views.

I've seen around here, and on other websites, pictures of people's home cinema rigs with massive dual subs, higher end speakers all around, a beefy high-end receiver with all sorts of audio modes and automatic setup, and... a teeny tiny TV lost in the middle of it all. Does this not defeat the point of having big sound? I know there may be other constraints, but in most cases money doesn't seem to be it, given the rest of the system. In my case, I have an admittedly budget system all around (low end Pioneer receiver, Monitor audio floorstands as fronts, cheap-ish flat speakers as rears, 12" Jamo sub and benq w1070 PJ), but I did go with the largest screen I could fit in the room and fill with the projector (150"). I do believe cinema should be big picture AND big sound, but I often see people focusing on one OR the other. Wouldn't a better balance of the overall system be more "lucrative", entertainment wise?

I have a kick ass sound system linked to my 106" screen with JVC 1080p projector for the movies and when I want to be blown away about 2-3 times a week.

I didn't mean to say most people have this spending imbalance, but I see it quite often, hence the reason to start the discussion about it.

I assume people want the best picture quality available hence going with OLED. The 4K projectors aren´t cheap and many don´t want to go through the hassle of mounting screen & projector, hiding wires what i have been told. I hope these ultra short throw projectors would come more popular and cheaper.

@pcspinheiro i have the same projector, but slightly newer short throw version as you although not in use atm as bulp exploded and i`m looking to move soon. It´s noisy as hell, but you can´t beat the big picture it gives! So to get most cinematic feeling i would say large screen is a must, there is no comparison. I had 106" fixed screen similar to @kbfern. 64" tv looks so tiny in comparison and it ain´t same experience.
P

Funny, my W1070 is not noisy at all. OK, you clearly hear the fan when only the projector is on, but during movie watching it's not an issue at all, I don't even notice it's there.

Yes, I also believe that OLED gives the best image quality (that i've seen, at least) and if/when my current philips breaks I'll consider it seriously (or QLED, as it continues to improve). I'm always blown away by the images on the display sets at stores

But back to the projector, maybe 4K will make a big difference, but I think this will largely depend on viewing distance. With my 150" at almost 5m distance, the pixels are completely imperceptible and I just get an immense picture. Significantly better contrast levels would be a bigger upgrade than more pixels, IMHO. Though better room darkening will also greatly improve perceived contrast).

Bear in mind that sometimes people will show a photo with a TV but also have a projector and screen.

I have a 65" OLED but no projector/screen. Music is a higher priority for me than movie playback though, and I wouldn't want to compromise the former by having to move speakers to positions that didn't obstruct a projector screen. My TV size is optimal for mixed useage according to this rtings guide, and I'm very happy with it. 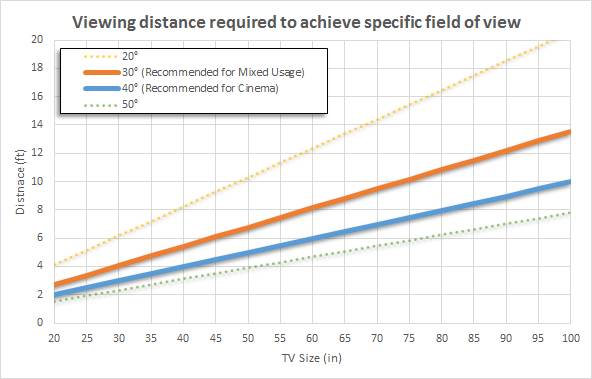 Our TV Sizes to Distance Calculator helps you choose the right size TV for your space. The optimal viewing distance is about 1.6 times the diagonal length of the television. For example, for a 55” TV, the best distance is 7 feet.

Ultrasonic said:
Bear in mind that sometimes people will show a photo with a TV but also have a projector and screen.
Click to expand...

I tend to do this, though you can see most of my screen behind the TV anyway, which shows just how much bigger the screen is and that it is a different aspect ratio too.

I guess some people attach more importance to the sound than the picture though? Or they are happy with a smaller TV screen, even if they go for OLED.

I've always tried to improve the whole system as time has gone by, so there have been stages where there was an imbalance and my audio was better than the video perhaps. I think I've kind of reached a point now where I'd have to spend considerably more money to get a smaller improvement compared to previous upgrades. I've seen and heard some highly expensive systems at dealer open days and while they are better, it's sobering to think how much they cost and that the difference (to me at least) wasn't that big.

One of the reason for said imbalance might be also the fact that it might be costly to get everything in one go.

Gear and setup listed in "about" section of the profile.
B

Would love a bigger screen, but have been told I can’t wall mount and can’t fit any bigger on my unit - so have to spend it all on sound.

Perhaps the biggest block on people buying big screens and PJs is the house they live in. Certainly couldn't fit one in mine. Just enough room for a 65'' OLED.
'My opinions expressed here do not represent those of the AVForums or its associated websites'.

Perhaps the biggest block on people buying big screens and PJs is the house they live in. Certainly couldn't fit one in mine. Just enough room for a 65'' OLED.
Click to expand...

Gear and setup listed in "about" section of the profile.

You have to give it a lot of lateral thought to fit a projector in a living room. Have a look at Beechy06 thread:

My screen is kind of 'hiding in plain sight', but perhaps I'm just deluding myself as I've never got round to sorting out some covers to hide it more when not in use: I convinced myself that it just looks like a white feature wall.

KelvinS1965 said:
You have to give it a lot of lateral thought to fit a projector in a living room. Have a look at Beechy06 thread:

My screen is kind of 'hiding in plain sight', but perhaps I'm just deluding myself as I've never got round to sorting out some covers to hide it more when not in use: I convinced myself that it just looks like a white feature wall.
Click to expand...

He has done amazing job, there is no doubt about that but as much, if not more, as my wife would not agree to PJ in living space I could not be bothered to go with such a massive job. I am too lazy those days or too tired. If I would be embarking on such a big project it would be only for all out dedicated HT space. Other than that it must be simple under 30min install like dropping gear on the shelf or TV on the piece of furniture. I am just realistic about my energy levels.

Gear and setup listed in "about" section of the profile.

KelvinS1965 said:
You have to give it a lot of lateral thought to fit a projector in a living room. Have a look at Beechy06 thread:

My screen is kind of 'hiding in plain sight', but perhaps I'm just deluding myself as I've never got round to sorting out some covers to hide it more when not in use: I convinced myself that it just looks like a white feature wall.
Click to expand...

Thanks Kelvin, whats funny is my screen is out more in plain sight too as we use it for casual TV viewing as well as films and sport these days, infact the only time the screen goes away is if we are watching TV in the day whilst its sunny and don’t fancy having to shut the curtains, or if we have vistiors and the mrs doesn’t want our living room to look like a cinema - not that we have had many round lately with lockdown!
Pioneer 50' Kuro - Epson 9300 - ReAct 104’ Retractable Screen - Oppo 203 - PS4 - SkyQ - Lyngdorf MP-50 - Lyngdorf SDA-2400’s - MK IW150 & 85's - Dual JL F112v2

Andy111 said:
Maybe they like tiny TV's and big speakers

I started a poll a while back, and most people do seem to spend more/have more focus on audio over video.

It’s often difficult for people to put 100”+ screens into a living room environment as generally lots of compromises need to be made. The best two rooms I’ve seen on here that combine both are @beechy06 and @KelvinS1965

Don’t be offended if you’ve also done a great job and not been mentioned, I probably just haven’t seen it!!

Here’s a link to my poll thread.

Question - When building your system, What is more important to you, video or audio?

A bit bored with home isolation, so thought I’d try and start a topic that may provoke various answers. I’m interested in knowing what people focus on most when they are building their system, and what part of it do you feel engages you into the movie the most. Do you focus mainly on the video...

A
Which dual BK subwoofer setup for 100% music use?

G
One big sub or one big sub plus one small sub? Going from 2 MA subs to a BK sub.