I'm looking to understand whether there would be any difference in sound quality between budget and high end (e.g. Panasonic DP-UB9000) 4K blu rayers if the player is connected to an AVR via HDMI (in my case Denon AVC-X3700H)? Would this be dependent on whether i select room correction (Audyssey) or Direct audio playback?

The audio you get from the source would be the same regardless of that source if bitstreaming it via HDMI.

The room EQ and its effectiveness is as much a matter of the room in question as the system being employed. Some rooms may require more assistance than others. Some sustems are however reharded as being better than others. DIRAC Live is for examp[;e though as being superior to what you'd get via Audysseys XT42 room EQ sustem.

The ulmiate wou;d be to have a toom where no room EQ correction or additional EQ processing is required, but you'd need some pretty extensive room treatments to get anything close too this ideal.

Don't confuse room EQ correction with audio quality or the ability of the amplifier to produce clean sounding audio. Room EQ xorrection deals with your room's acoustic anomalies and doesn't do anything to improve the signal. If anything, room EQ correction adds additional processing that will more than likely be detrimental to the audio signal.
S

Thanks Dante, so in short, a premium and budget 4k player would sound identical if bitstreaming because the DAC conversion is done by the AVR?

Smithg97 said:
Thanks Dante, so in short, a premium and budget 4k player would sound identical if bitstreaming because the DAC conversion is done by the AVR?
Click to expand...

Some premium players have better DACs and power supplies that can result in better analogue audio if using their analogue outputs, but the HDMI output is generally the same regardless of the player or what you paid for it.

I'll disagree with dante here. I've owned players by Sony, Denon and Pioneer. One of the Denons, which I still own, is a transport. The Sony, a £120 player produced poor audio, especially with frantic scenes, something that was cured by the Denon, £449. Both those players are blu ray only. I currently have a Pioneer LX500 and the audio from film, both 4K and blu ray is the same as the Denon. The Pioneer outperforms the Denon on SACD multi channel.

Saying that players just pass information in the digital domain to the processing external DAC is a bit too simplistic. Build quality, especially of the pick up and drive mechanism does have an effect.
'My opinions expressed here do not represent those of the AVForums or its associated websites'.
S

Thanks Gibbsy, essentially i want to know whether the upgrade from the current 4k blu ray player i have (DP-UB450-EB-K) would be worth it for audio and picture quality and whether the panasonic DP-UB9000 would serve as a good 2 channel music CD player when connected via coaxial to Audiolab 6000a

AS I suggested, you are unlikely to be able to differentiate any difference if bitstreaming via HDMI, but if using the higher tier player's own DAC then you may benefit from that players analogue audiophile orientated output. THe player does however have HDMI low clock jitter processing that isn't guranteed to make a difference, but doesn't hurt either.

You should be made aware that despite that player being targetted at those wanting better audio performanc that it hasn't the SACD or DVD-Audio support you'd get with some of the other products similarly targetted at this sector.

The UB9000 might be a very capable digital transport, but if that's all you want then you may as well buy the UB820 instead. However, if you're interested in the more expensive model, then the chances are that aside from its build quality, what you're really interested in is its analogue capabilities. If so, you won't be disappointed. The Panasonic can play back audio in two-channel stereo using either the dedicated RCA phono or balanced XLR connectors. It can also handle 7.1-channel audio, which can be useful when playing back high resolution music encoded on Blu-rays or digital files.

The Panasonic proved supremely capable at decoding and converting digital into analogue, resulting in a genuinely impressive level of sound quality. In subjective testing, I found that the player was capable of retrieving more detail from a recording when compared directly with the digital outputs. I was able to make use of the balanced XLR outputs and there was a marvellous clarity to the sound, with wonderful stereo imaging and superb resolution. The audiophile components, separate power supply, and high quality DACs all combined to deliver a very capable analogue performer.

As I ran through a number of my favourite albums, the UB9000 seriously impressed with its sonic credentials. The symphonic majesty of Suede's new album The Blue Hour sounded superb, with every detail of the complex arrangements revealed by the player. The sparse instrumentation and lo-fi nature of Bruce Springsteen's Nebraskawas perfectly rendered, while the hard rock of Appetite for Destruction by Guns 'n' Roses pummelled my system into submission. If two-channel music and analogue playback is important to you, then the UB9000 is sure to please.
Click to expand... 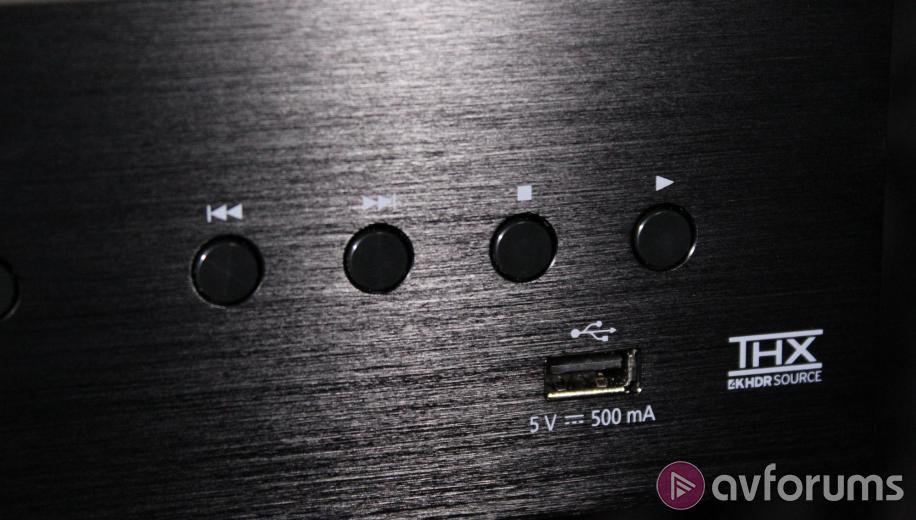 Is the Panasonic DP-UB9000 the new player of choice for enthusiasts? Find out in our review.

Also worth noting -- for whatever it's "worth" -- is that Panasonic claims (at least on the UB9000 model) their HDMI implementation on the audio only output supports a "reclocked" anti-jitter approach that's supposed to improve (somehow) digital audio being bitstreamed over HDMI (or if, I suppose, the player has been set to transcode formats to PCM over HDMI).
AV: ONKYO TX-SR605B | Panasonic DP-UB9000P-K | SɅMSUNG UN65NU8000FXZA | polkaudio RTi12/CSi30/PSW350
SpeakerCraft In-Ceiling Surrounds | Auralex Acoustics SubDude | MONSTER PowerCenter HT700
HI-FI: ONKYO TX-8555B | marantz CC4001 | TASCAM CD-RW900SL | Numark CDMIX 1
Infinity Primus P363BK | audio-technica AT-LP120

Technically, the AVR is reliant on the BD player's clock, regardless of the protocol you choose to use over HDMI (bitstream and PCM are absolutely identical in this respect). Hence a better BD player can indeed achieve a better audio quality form the target AVR.

Of course, the AVR is also a factor in that its clock recovery quality plays a role - that is generally affected by all the digital processing the AVR is doing (including room correction).

Also as IntelliVolume points out, attempts are made at reclocking, again, more frequently in higher end players / AVRs. My Oppo UDP-205 makes a major point of this for its audio only HDMI output.

Agree that there are audio differences budget versus premium but think that at normal system costs (rather then very high end) it is the video differences that are the focus.

And I'm speaking from experience, as I think I have possibly the cheapest 4k player you can buy!
You must log in or register to reply here.