Ive noticed something today to do with my Sony 3LCD KDF-E50A12U and was wondering if anyone can help me?

What Im after checking is if you press your menu button are the characters out of line (ie you get a ghosting image of the same letter to the left for some reason mine is in pinkish)? And do you get any ghosting at all around the edges of people or text PAL 60 on 360 at 60hz 720p via component (I notice this especially on 360 dashboard now everything has a pinking ghosting of the same letters behind the typed items) or ghosting in films at same as I have a nasty feeling my 60hz option is dying (PAL 50hz is fine but for some reason 60hz is really ghosting and even the HDMI or AV3 is going pinkish around the lettering on the information). I must admit its been ghosting on 360 for abit but as Ive only watched a load of PAL films and not used the 360 for about 3months I hadnt noticed it this bad.

If it is a fault do I phone Sony or go back to Currys where I got it from for help as well?

Sorry to be a pain to ask but I want to check its my telly whats developing a fault and its not just the model what cannot output 60hz properly. 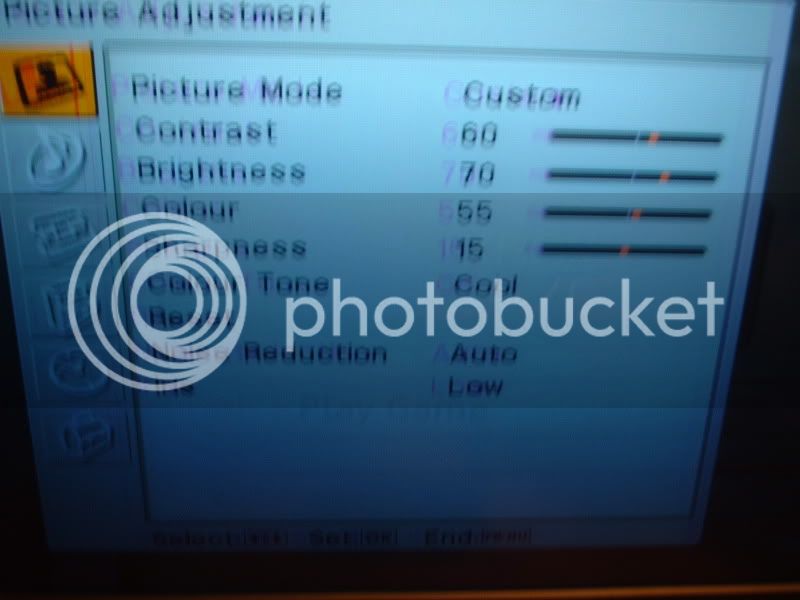 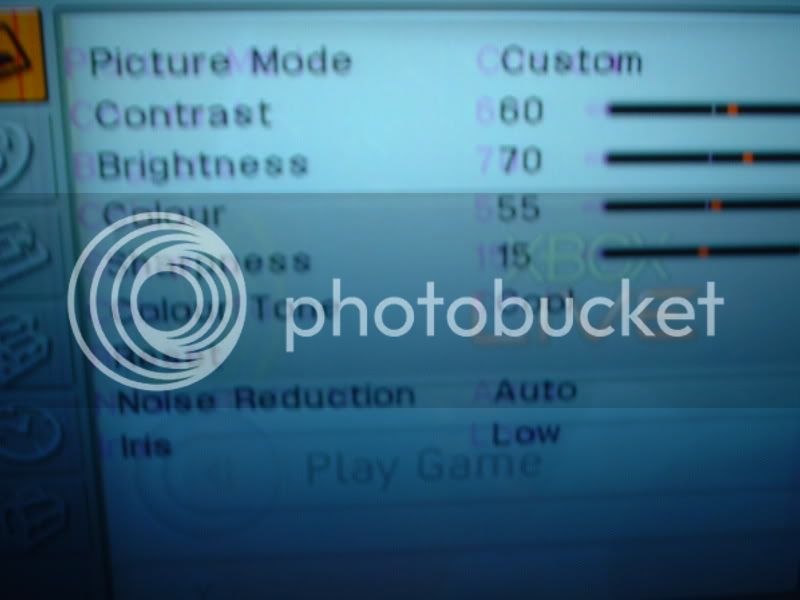 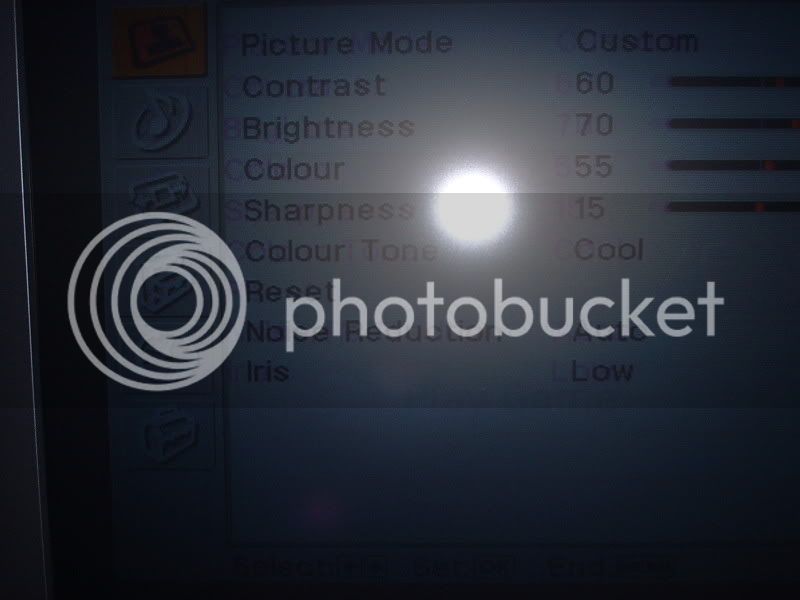 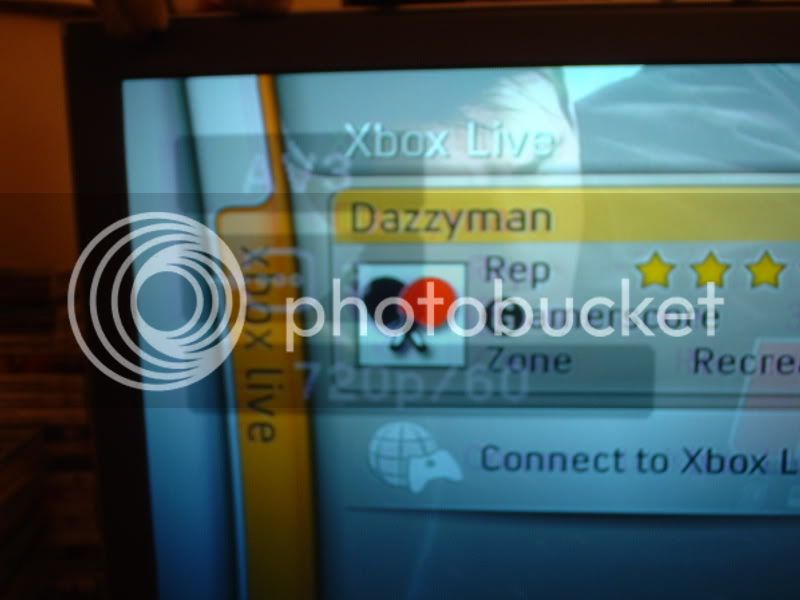 Here are the final 4 from Band Of Brothers tv series on dvd (ntsc version upscaled to 720p). On pal 50hz its fine but the moment I switch to 60hz ntsc I get a weird glow down mainly the left hand side edge of people on scenes (ive zoomed in one to highlight it) problem is if I use 50hz PAL I get a slight juddering on fast scenes (and this is how I reliased tonight I might have a fault when switching over to ntsc and pink hazing). 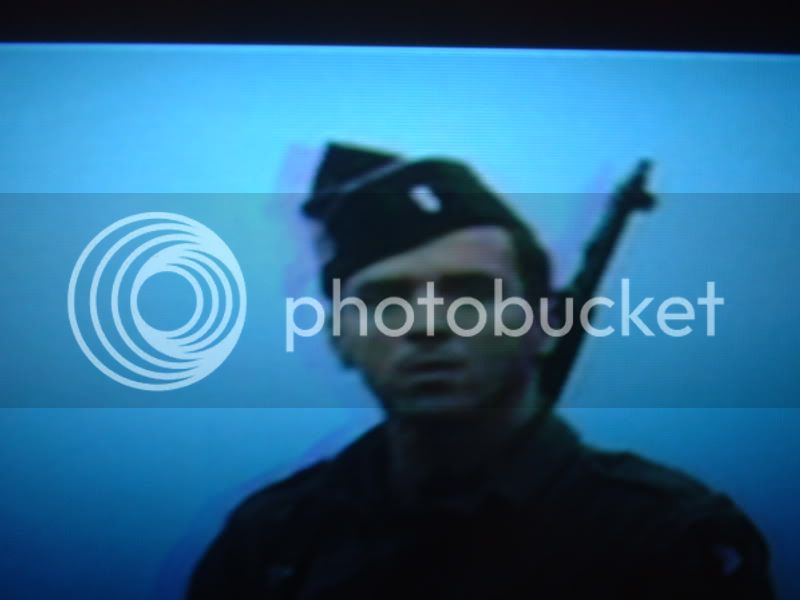 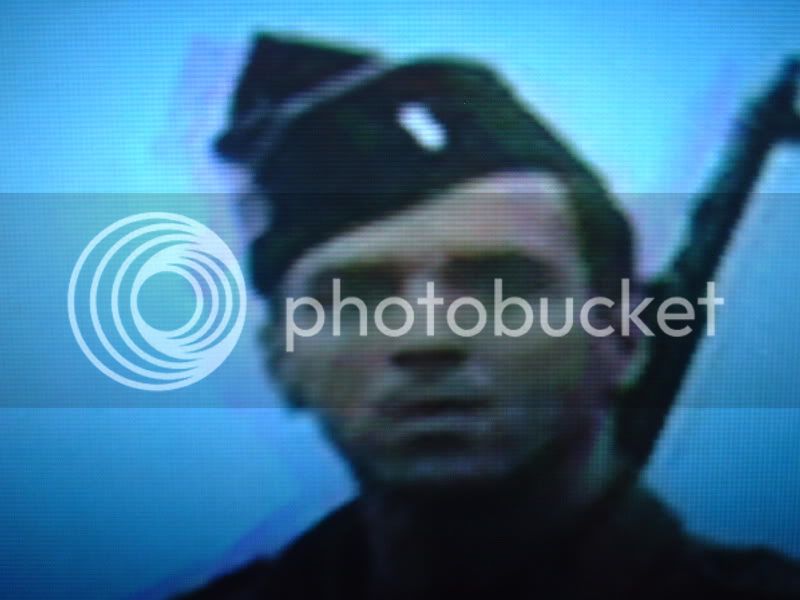 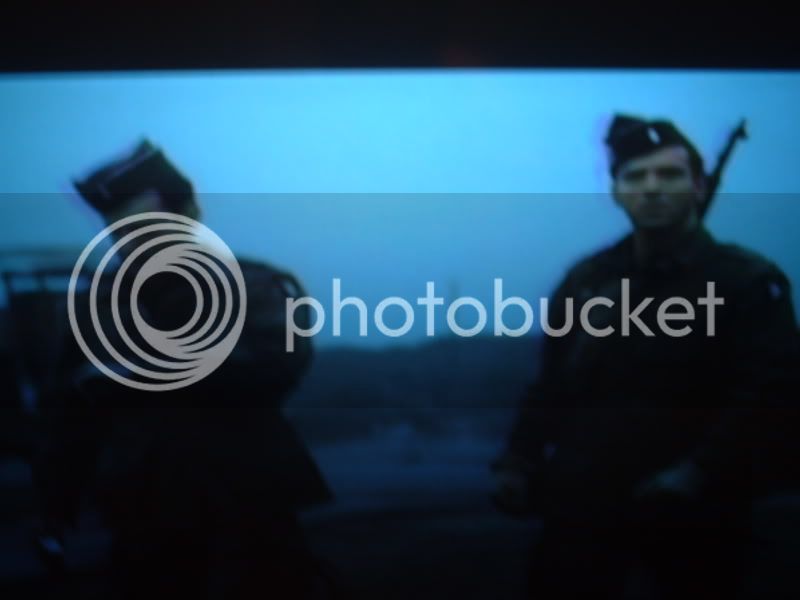 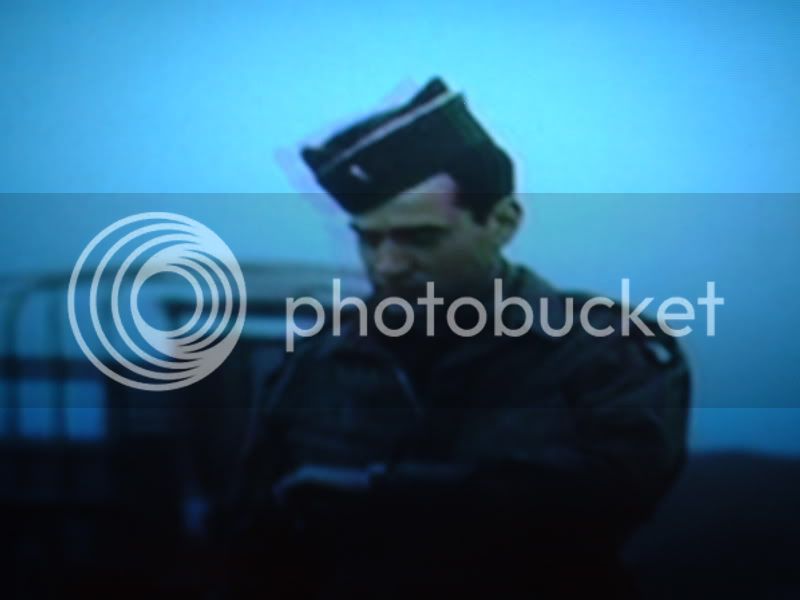 I'm having the same issues. I didn't have ghosting when i bought this tv last october, but it started about a month ago. I use PC hooked via HDMI, and on 720p at 50Hz it seems okay. when i try to change the overscan setting from video driver properties to 1232x692, to fill screen properly, it changes to 60Hz and ghost image appears. It's the same problem, ghosting is seen also on TV's menu, and volume change bar, but none at 50Hz. I can't get 1232x692 resolution to work at 50Hz (geforce 6800GT). Could there be new firmware, what makes this, or has these sets just weak components

Only place I can find the firmware is 2.4161 in the digital settings is that the one? (as I just thought that was for the internal digi box)

Ive actually found some pictures of my 360 I took when I got the unit in January and it didnt have this problem so theres definetly something happening. I cannot put up with this anyway, Ive tried this morning and 360 stuff looks a blumming mess now so I will ring Currys tommorow and try and get it sorted out.

Its fine on VGA on 1024x768 at 60hz on my telly which seems to be the only 60hz its ok on. I have tried all the connectors via HDMI and component (even checked with and without different cables and same with switch box) and anything on 60hz thru them is really going out of sync.

Maybe we just have developed the same fault at the same time mate but I will let you know how I get on this week as my main source for television is via 60hz NTSC (as Iv'e got most of my 700 films in that format) and thats what I did check for when we bought it.

I've got an engineer coming Thursday so will let you know how I get on. I was abit annoyed with the customer service bloke though as first thing I mentioned was it did it on xbox 360 and he cut me off saying it must be fault with that! Then I explained its everything at 60hz and he shut up then

I wouldnt mind if it was white with a bit of misalignment but as I said mines gone pinkisih so it definetly stands out and there was no way the telly did this when I bought it. You will know yourself if you try and play anything on 360 like that though it makes reading text a nightmare (also check a 720p movie off market place to see how bad it can look!).

I aint going to tempt fate anyway all I will say is if they cannot fix it or its a inherrant fault due to firmware I aint putting up with a television what wont do 60hz at 720p without ghosting, I am gutted though as ive used this telly about 12hours a day since Jan 06 so I hope they get it sorted. At moment though Ive benched all my dvd and gaming till it gets sorted (my mum actually commented today that its out of allignment on 50hz as well though in white even though I cannot see it with my dire 4/20 vision ).

Currys engineer has been (and was a smashing bloke actually, jolly nice ) and he reckons it could be one of the optical boards whats faulty so (with my permission I might add of what I would like which I found great service) hes going to replace it next week and see if it fixes it or not. Its a definite fault though and not just some werid design at 60hz not being capable which was my main concern. I know its bad I have another week of blurriness I guess but at least it puts my mind at ease greatly now of how much Currys support has improved.
http://www.flickr.com/photos/dazzyman/sets/
(GTAIV etc)
http://www.vimeo.com/970567 HD footage (GTAIV stunts etc..)
PS3 Dazzyman 360 Dazzyman

Hi,following this thread with great interest,my same tv set has developed the exact same fault.I also use the 360 on component input and getting a lot of ghosting to the left.I have contacted sony and they are collecting set soon for a service check,i will keep you all posted............
LG 50PK590,Onkyo 605,Sony BDP 360,Xbox One,2x360 Elites',360 premium,Sky HD,Morduant Short Avant series,
360 Gtag = Daddycool 01
PSN Id = Dc1969

Cheers let us know how you get on please I find out tommorow (Thursday) whether its fixable or not with Currys (but to be fair to them they did know what they where talking about when he came to fix it).

For me it is steadily getting worse though, my freeview built in has started working sporadically now and loosing its connection via scart (and even thats been going pink in PAL 50!).
http://www.flickr.com/photos/dazzyman/sets/
(GTAIV etc)
http://www.vimeo.com/970567 HD footage (GTAIV stunts etc..)
PS3 Dazzyman 360 Dazzyman

Well that was a waste of a week! Replacement engineer came today (as the other bloke was on holiday this week) and it looks like he didnt listen to what was needed as all he brought along was a replacement bulb. Yea that I get a new bulb for nothing but boo as it of course didnt fix anything I explained what was said and he phoned Sony up.

The exact part "hopefully" coming next week is IC/002 and its a software chip as apparently there was some faults with a stable image at 60hz according to Sony and its since been firmware updated (behind back of scart socket from what was said). Problem is though mine is a stable image so it looks like it probably wont fix it. I said I will give them this last attempt to fix it before I go back to the store and ask for either replacement or refund as by then it will be 3weeks since we asked for it to be fixed basically. So yet again another week without 360 gaming or dvds
http://www.flickr.com/photos/dazzyman/sets/
(GTAIV etc)
http://www.vimeo.com/970567 HD footage (GTAIV stunts etc..)
PS3 Dazzyman 360 Dazzyman

Just tried mine and its perfect.

Aye Im currently using my 22" PC monitor for everything. I find out in the next 5hours whether mines fixable or not inhome (and its a nightmare waiting as I got Dead Rising delivered today on 360 ).
http://www.flickr.com/photos/dazzyman/sets/
(GTAIV etc)
http://www.vimeo.com/970567 HD footage (GTAIV stunts etc..)
PS3 Dazzyman 360 Dazzyman

Na its worse than that I got Dead Rising delivered from Gameplay this morning Currently waiting on a Manager from Currys to ring us back as well.
http://www.flickr.com/photos/dazzyman/sets/
(GTAIV etc)
http://www.vimeo.com/970567 HD footage (GTAIV stunts etc..)
PS3 Dazzyman 360 Dazzyman

Still waiting, just phoned again and there getting back to us today. Bit miffed as I was going to go out and get Madden and Test Drive to go with Dead Rising
http://www.flickr.com/photos/dazzyman/sets/
(GTAIV etc)
http://www.vimeo.com/970567 HD footage (GTAIV stunts etc..)
PS3 Dazzyman 360 Dazzyman

Well a result sort of. There picking the telly up on Tuesday and lending us a replacement. If the telly isnt fixed and back by the following Monday I can have a replacement.....guess I shouldnt have gone off and bought Madden AND TDU now
http://www.flickr.com/photos/dazzyman/sets/
(GTAIV etc)
http://www.vimeo.com/970567 HD footage (GTAIV stunts etc..)
PS3 Dazzyman 360 Dazzyman

Well engineers just decided not to bother turning up yesterday and reschedule for Thursday instead without telling us so its looking more and more likely I will be getting a replacement now. The store have been VERY good though, they even offered to send someone out on there day off yesterday to lend us a telly in the mean time.
http://www.flickr.com/photos/dazzyman/sets/
(GTAIV etc)
http://www.vimeo.com/970567 HD footage (GTAIV stunts etc..)
PS3 Dazzyman 360 Dazzyman

Well you have accepted a repair mate so you have given the oppertunity for them to fix it so Id ask for a replacement at the very least now.

Mine got picked up today, it wont hit the depot till tommorow so I dunno how the heck there going to get it back to me by Monday fixed (thats when the 28days kicks in for exchange). Looks like its going to be an exchange way its going. Lad from currys came out with a loan LCD LG but wrong remote so as Im bedridden most of the time it makes it hard work so my family is going over to the store tonight to pick it up. The store have been very good though and I would happily buy something else or exchange etc... so that hasnt put me off (I understand stuff breaks Ive had 3 broke televisions in 1 week before). They didnt have to lend me a television or go to this trouble and its not there fault it breaks, its blumming Sony

I was told the same thing though they would take it back switch it on and test it without a HD feed and wont register the fault which is whats happened to you Mine had gradually got worse and it was doing it quite badly via freeview last night as well with a white image and also its started going in and out of focus for about 2seconds. I thought it was my eyesight (as Im 4/20 vision based) but rest of family spotted it last night when they came in for a few mins.

Parents came back with remote and guess what, yep they gave them the same wrong one as this afternoon (its 12miles away to the store) so loads of fun
http://www.flickr.com/photos/dazzyman/sets/
(GTAIV etc)
http://www.vimeo.com/970567 HD footage (GTAIV stunts etc..)
PS3 Dazzyman 360 Dazzyman
You must log in or register to reply here.
Share:
Facebook Twitter Reddit Pinterest Tumblr WhatsApp Email Link