Sony's W950B series flagship 1080p TVs have now landed in the UK and I thought it would be about time to post a dedicated thread. Should be interesting to see how this model compares to the rest of the 2014 range and if it is as good as last year's flagship, the W9 which was a stonker.

From the Sony product line up:

Colour is a theme very close to our hearts as it breathes life and soul into our BRAVIA TVs. Thinking back to some of the great Sony adverts such as bouncing balls in San Francisco, the model bunnies in New York or even the most recent petals bursting from the volcano, they all share colour as a constant theme, so it really is part of our DNA. So in this blog we wanted to dig a bit more into some of the technology that brings content to life on the new 2014 BRAVIA’s.

Originally introduced in 2013 and now on even more TV’s, Triluminous displays offer a far wider colour gamut or spectrum than traditional panels so subtleties become far more apparent. The wider the colour gamut is, the more colours you can use to draw images. It’s like having available a wider range of colour pencils to draw an image with. This contrasts with having to choose from a smaller number of pencils – fewer colours – with conventional White LED displays. It used to be said that LCD’s weren’t as strong as Plasma’s when it came to drawing deep blacks. But over the last few years, that gap has pretty much disappeared and many LED based LCD’s are producing better blacks than their Plasma based rivals, but without the traditional Plasma drawbacks such as higher power consumption.

The Peak LED Boost technology dims the backlight for dark areas of a scene, so you will see much deeper dark scenes. A unique algorithm lets the TV use backlight energy more efficiently with saved energy used to boost the peak brightness of on-screen objects. As a result, blacks are darker and peaks are brighter – letting you see a much wider brightness range as well as making better use of power.

Backlight Control has taken a leap forward. In a conventional TV, even when the picture is supposed to show “pure black” there is a certain amount of light that leaks out from the backlight behind the screen. This leakage will brighten dark scenes, and will not be able to show a clear gradation of the black to bright shift.

With XDR & XDR Pro the backlight can be precisely controlled by a unique algorithm controlled by X-Reality PRO picture engine. By minimizing the light leakage and managing the backlight levels for each screen area you will discover new expressions behind the gradation of dark scenes.


However there are also a number of distinct practical benefits with this design as well. 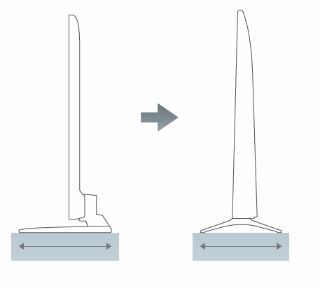 The small footprint saves space as well as making the TV more stable by lowering and bringing the centre of gravity forwards, so there is no need to overcompensate by having a wider deeper base. 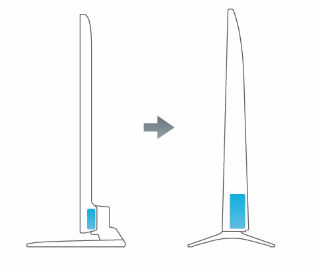 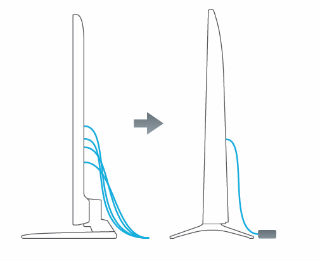 It’s also far easier to connect your peripheral devices such as Blu-ray players or PlayStation 4 to Wedge designed BRAVIAs, thanks to the bundled port replicator which connects via a single cable to the back of the TV.


For anyone who has previously fumbled around the back of the TV trying to attach an USB thumb drive or wanted to better hide the sheer volume of cables going into the back of the TV, this is the TV for you. Breaking out the input sockets from the TV onto a port replicator effectively offers far greater flexibility.

While picture quality has improved rapidly with every new generation of TV, sound quality hasn’t improved quite as quickly. However Sony’s new unique high capacity Long Duct Speaker technology - which features on a number of 2014 models - takes the TV audio experience to the next level. To give you an idea of the increase in capacity, a competitor’s brand offers a 0.32 litre volume in their comparable model speakers. The new 2014 65W950 offers 2.8 litres volume, a significant difference - which thus delivers an audible difference. In addition, the larger the speaker capacity becomes, the longer the duct of the speaker becomes. This allows resonance that amplifies lower frequencies.

TVs with Long Duct Speaker technology also feature a built-in subwoofer which will make a huge difference in the quality of the bass. This is complemented by an angled baffle plate that reflects sound coming from the drive unit beneath the TV, meaning that sounds are directed straight towards the listener so they can be heard more clearly. It’s well worth hearing the difference on the new 2014 range of BRAVIAs, especially the W95.

Check out the new 2014 W95 BRAVIA and see for yourself the best full HD LED TV we’ve ever made. You can find your nearest dealer here.
Last edited: Mar 5, 2014
From LONDON TERMINALS to MANCHESTER STATIONS, travelling on the INTERCITY West Coast Main Line.

For the inner position, the feet are much to close together - what were Sony thinking when they designed the layout!

Also I notice JL state it has Freesat - I don't think that is true - the satellite tuner may well be like the w905, just a bog standard FTA satellite tuner with NO Freesat 7 day EPG.

Let's hope it does not suffer the dreaded pillars, pink shift and colour blotches that afflicted my returned 55w905.

I can confirm that it doesn't have the pinkish viewing angle.
While last year's W905 had a VA panel, this one though has a LG IPS panel, so I have my doubts regarding the blacks of the TV.
Still waiting for the first reviews by avforums and hdtvtest but I would be surprised if it scored higher than the W905.
LG C7 OLED

btw. before the site revamp we had a list of upcoming hardware reviews in the upper right corner of the hardware review section.
Do we still have it somewhere? That way we would have an idea whether a W955 review is due soon or not.
LG C7 OLED
R

I have one of these on order from John Lewis, delivered next Tuesday. Going from a 7 year old 40W2000, so should be a big difference!

Anyone know the model of the optional subwoofer and when it is available?

I too am eagerly awaiting some reviews to drop.....Ive been fighting with myself over the W905, Samsung f9000 and VT65 for weeks. Seem to change my mind on a daily basis and the missus is getting the hump.....! Just need to pull the trigger but with the new sets just starting to drop im finding it difficult to commit ;-)
Groove's floating wall thread ;-)

I have just been notified that my W955 has been dispatched. Should have it 06/03.
Ill get whatever info you ask for from it if you like
I'm sure I will be playing with it for a while

Nice
Really like the look of this W955 , but the low pricing ( comparatively to last years models at launch) confuses me......
Groove's floating wall thread ;-)
F

Lomak said:
I have just been notified that my W955 has been dispatched. Should have it 06/03.
Ill get whatever info you ask for from it if you like
I'm sure I will be playing with it for a while
Click to expand...

Your personal review could be a UK first?
Pythagorean Popular Front
approaching politics from the right angle

Just chatted to Sony Store online and asked when the 65" might be available and they said "honestly we don't know, likely to be next June" (which I'm assuming means this June coming).
M

groove said:
Nice
Really like the look of this W955 , but the low pricing ( comparatively to last years models at launch) confuses me......
Click to expand...

Same here, hopefully there'll be some decent reviews soon, but may wait till later this year/early next and see how far the price of 4K drops.
W

groove said:
Nice
Really like the look of this W955 , but the low pricing ( comparatively to last years models at launch) confuses me......
Click to expand...

Me too somewhat! But I've adopted the attitude it's not much dearer than the w805 47 inch I bought last year , is 55inches has the triluminous screen and the wedge sound improvements? Xtended dynamics could Sony really drop the ball that much to make it worse than last years w8 which I think is an OK tv to be fair, and cut backs made on inferior? cheaper component parts costs to enable the lower launch price or is it just market forces hitting there exaggerated profit margins. Is an IPS panel the make or break of a great TV?, as long as I can see and hear improvements I'll be happy with the end result product at the price point,
My pre-ordered is scheduled to be delivered Thursday
Last edited: Mar 4, 2014
C

Besides some IPS drawbacks my set suffers from clouding and backlight bleeding issues. I can't notice an improved sound from the wedge design with its long duct speakers.
M

Besides some IPS drawbacks my set suffers from clouding and backlight bleeding issues. I can't notice an improved sound from the wedge design with its long duct speakers.
Click to expand...

Hi Chrisk, I guess you are in Germany? Have you been able to watch any sports yet with this model. Would like to know if you have any banding or DSE?

RobW955 said:
Anyone know the model of the optional subwoofer and when it is available?
Click to expand...

No idea of a release date but the model no. is SWF-BR100

Not really but from what i've seen by now hardly any DSE or banding. I opted for a refund today, maybe i'll buy a W905, Samsung F8 or one of the new H line from Samsung.

chrisk said:
@mentsugi ... Not really but from what i've seen by now hardly any DSE or banding. I opted for a refund today, maybe i'll buy a W905, Samsung F8 or one of the new H line from Samsung ...
Click to expand...

So you are "xderpla" on HIFI-FORUM.DE and posted this, this, this and this there ??

Interesting, did you buy the 955 from Saturn ?

I saw the 55W955B in JL in Reading yesterday and was lucky enough to be there when the local Sony rep was installing it - a few observations.

1. The inner stand positioning is determined by the internal metal bracing which is set to standard VESA horizontal dimension.

2. The rep was adament that this does NOT have an LG panel and is not IPS - not so sure about that myself in view of other information on the net. He added that Sony had exclusive use of this panel and it is sourced from an unamed Chinese manufacturer.

3. Within the limted tme and shop environment I did not see any evident clouding or edge pillars.

4. There was no pink shift issue with viewing angle.

5. There is no Freesat EPG - Rep confirmed that Sony refuse to pay the License fee.

No, directly from Sony. Why you're asking (hifi-forum.de)?
B

They seem to have received the TV and review up shortly