Sony kd65xe9005 gets pixelated screen and then turns off, unable to turn it on until it cools down

My sony kd65-xe9005 started acting up couple of days ago. After it is on for a while (from a couple of minutes to 4 hours) the screen gets pixelated (see picture) and frozen. The sound continues to play for couple more minutes then the TV goes completely off and is not responding to anything any more. The LED indicator light below, is not responding either. If I unplug it and plug it in again it does not respond. However, if I unplug it and keep it unplugged for a couple of hours (very hard to determine exactly how much, usually over the night) after I plug it in again it starts up again (it doesn't always start up at first, but after a couple of try with plugin and unplug in and pressing power button). 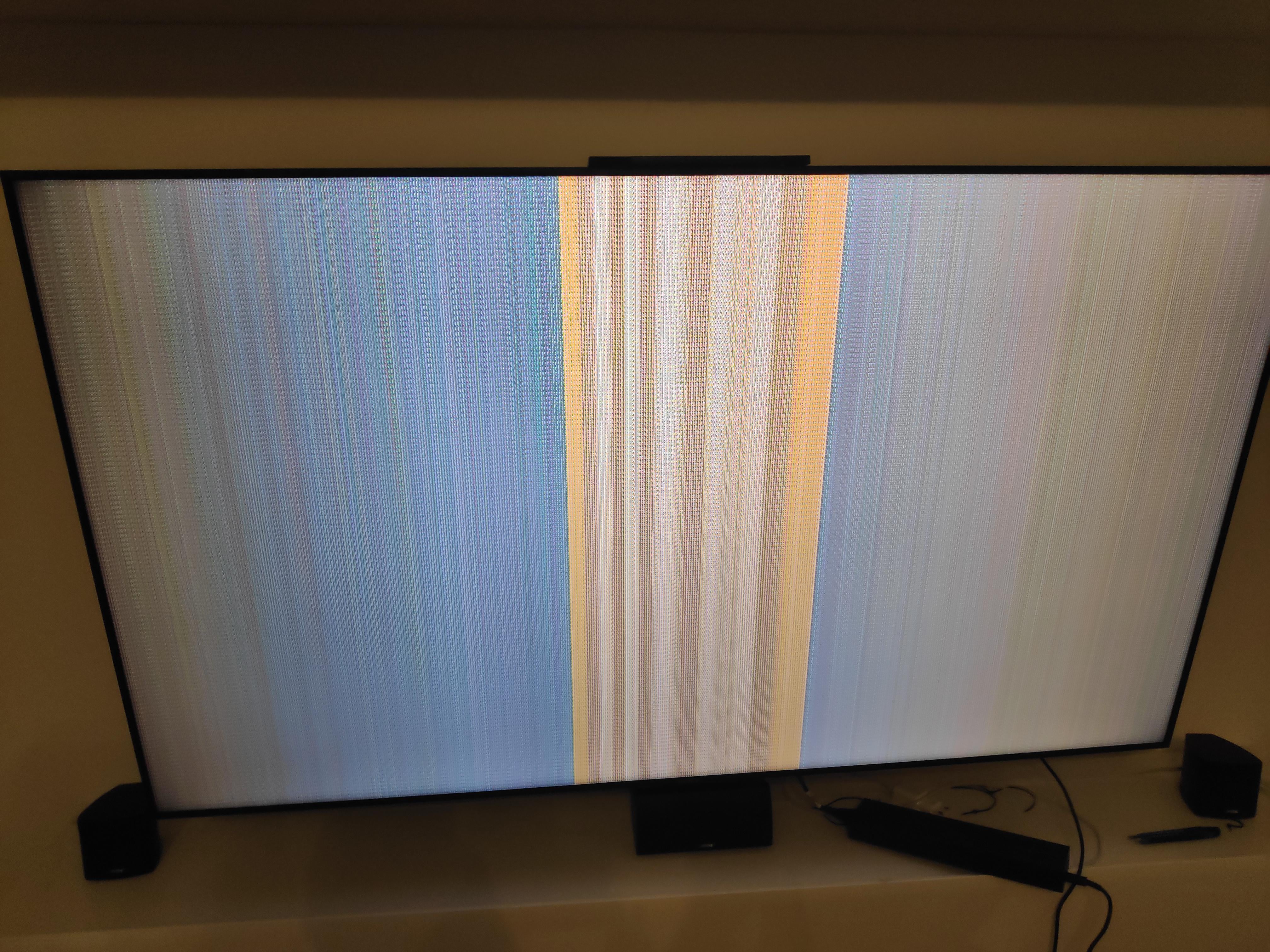 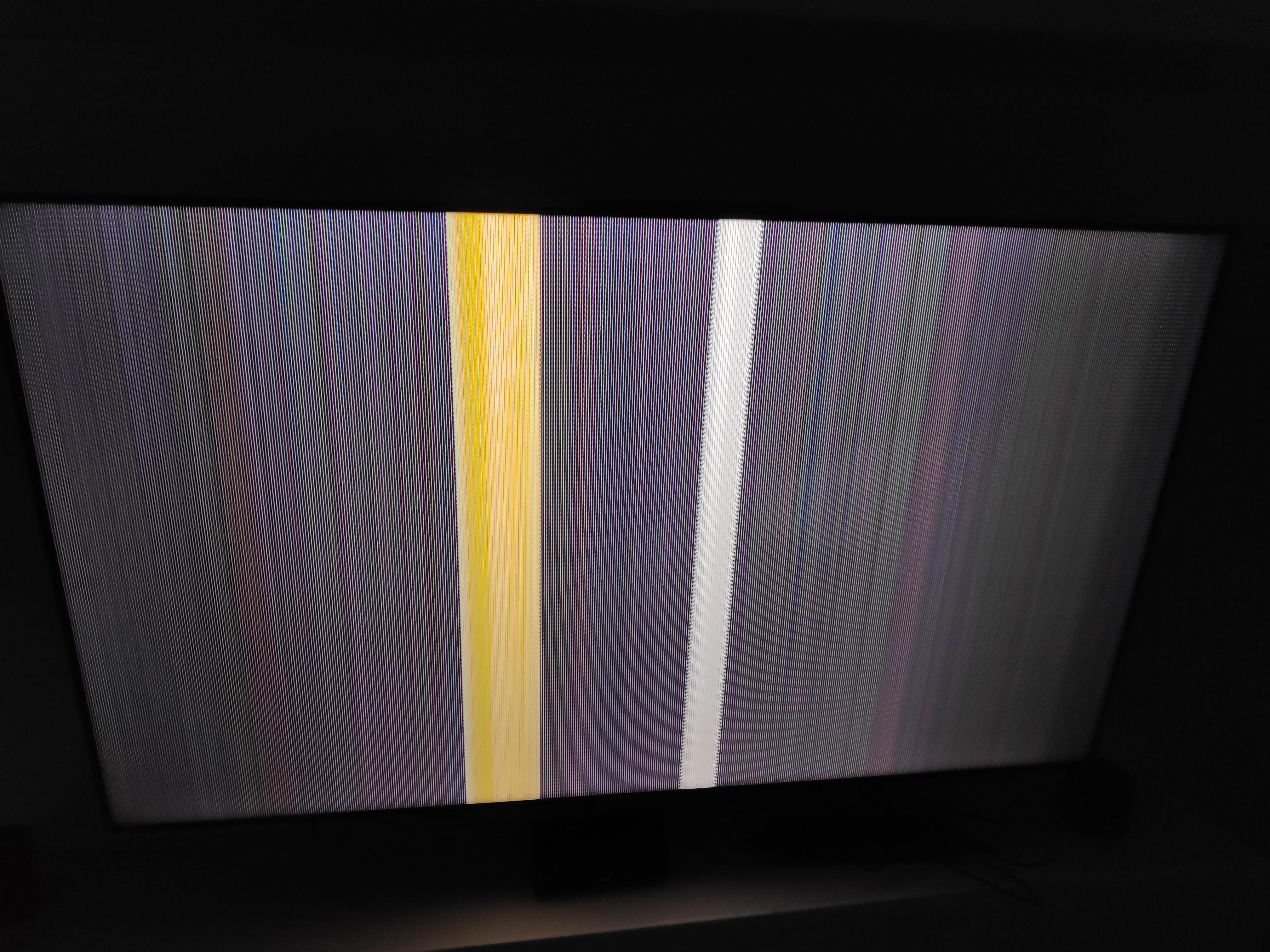 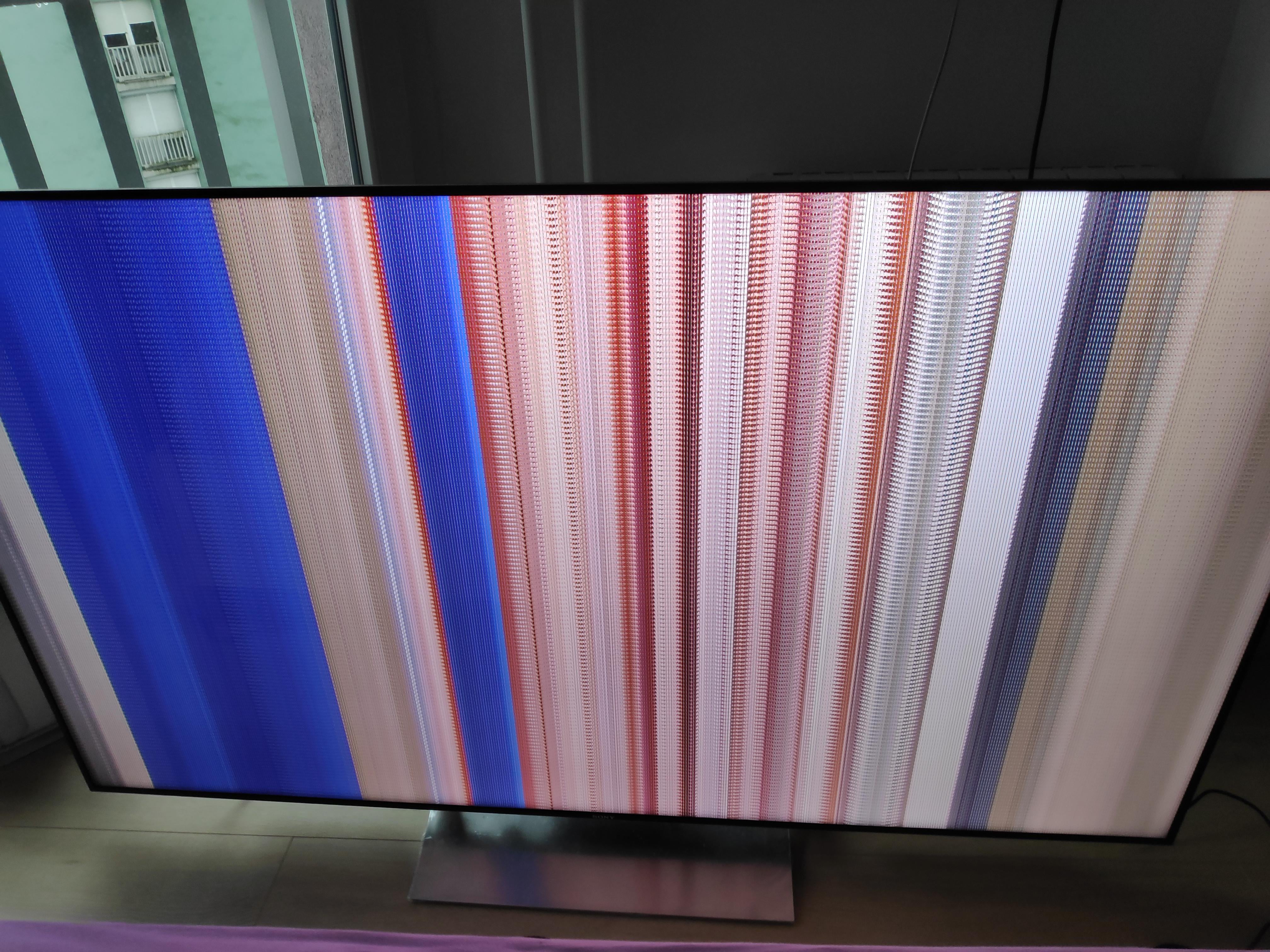 The color lines seem to correspond to the last picture before freezing, but hard to say, once they are on, they are static.

I suspect it has something to do with heating, because after moving it closer to the window and opening it, the TV keep working way longer (couple of hours as opposed to minutes) before it froze. I have tried opening the back and checking the capacitors everything seems ok, also I could touch all components, no-one was too hot to touch.

I also tried unplugin couple of cables (circled on the image) and the screen went from frozen, to the cycling of RGB colors as seen on the last image. 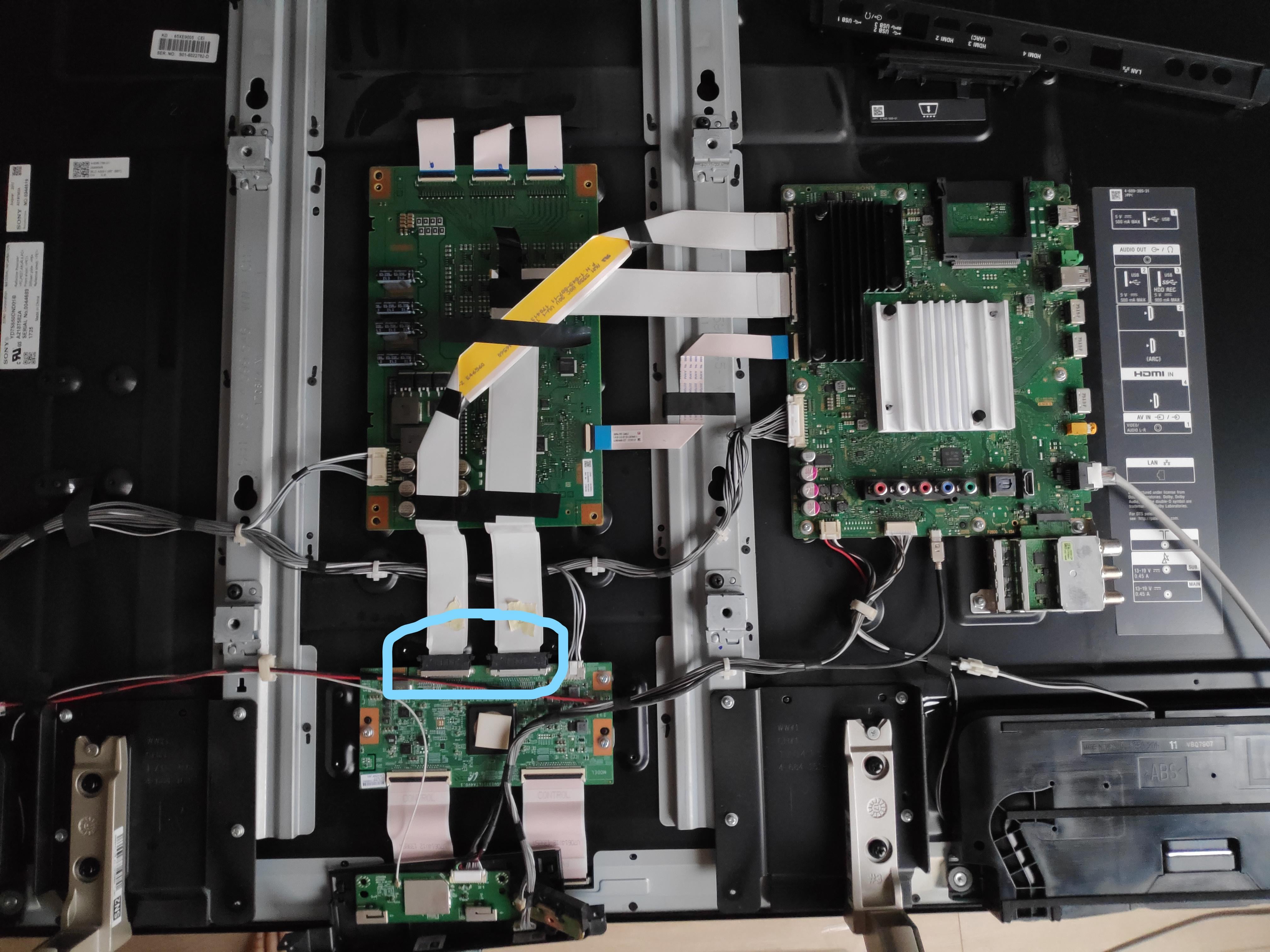 If I unplug these cables the RGB screen comes on (the picture unfreezes), after plugging them in again, it goes back to frozen screen. 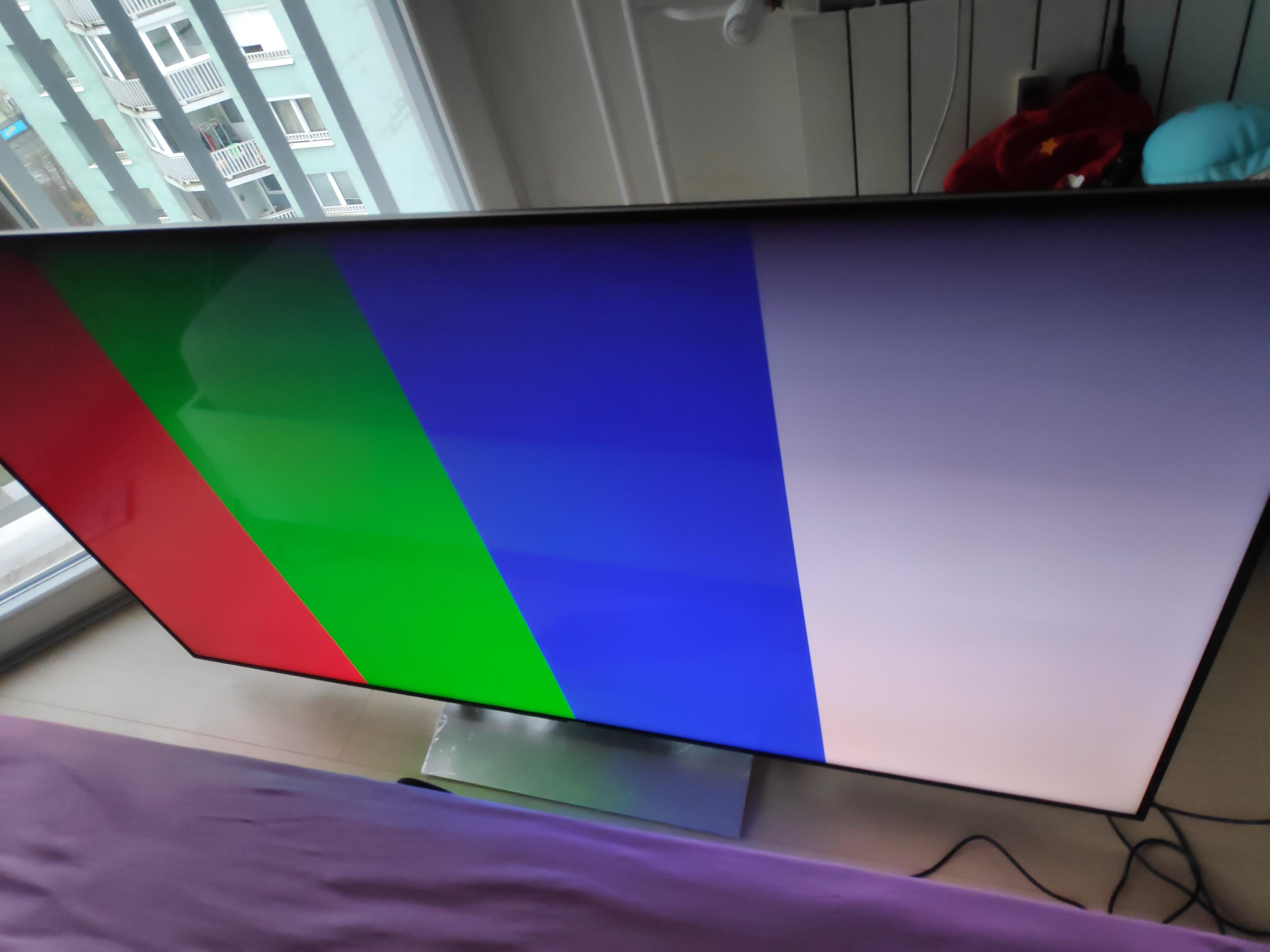 Even when TV freezes, the led indicator on the middle board stays green, so I have a feeling it has nothing to do with the power supply.

Anyone knows what the problem might be or how to fix it? Any idea what I can do to exactly pinpoint the faulty component?

Here is the link to the images:
L

Looks pretty serious to me. Is it out of warranty?
A

I would think one of the 2 boards I have circled in red.

Find many great new & used options and get the best deals for Sony Kd65xe8596 Main Board 1-982-022-11 Screen V65qwme06 at the best online prices at eBay! Free delivery for many products!
www.ebay.co.uk 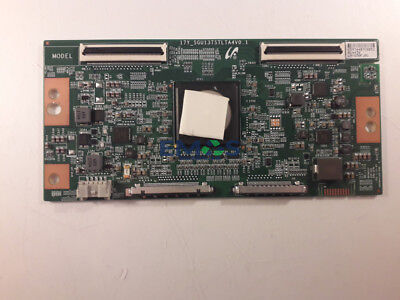 Help before you buy. Emos.ltd - BN41-00851A BUTTON UNIT FOR SAMSUNG LE37M86BDX/XEU. All repairs are carried out at you own risk. Mon-Sat 8am - 5pm. Technical support available. EMOS Are the UK's leading supplier of harvested TV parts.
www.ebay.co.uk

I would suggest testing the tv with the back panel off

and gently heating one of the boards with a hair dryer on low and see if you can accelerate the
issue coming up and take it from there.

But check your warranty first alot of these came bundled with 5 yrs.

Thank you for suggestions! The TV is sadly not under warranty anymore. I have changed the thermal paste under the heat sinks on the input board and I think the TV now works much longer before stopping, so I have a feeling its a problem on that board, but will also try your method just to make sure. Its kind of hard to diagnose it like this, but worst case scenario is I buy both boards, still much cheaper then new tv.
A

try the big board first.

Changing the motherboard did fix the problem.

Actually I bought motherboard for smaller TV 55 instead of 65, the serial number still matched but it costs about 50% less, if anyone will have similar problem.

One thing I had to do after changing motherboard was flash new firmware on it, the tv didn't turn on otherwise (blinking amber and green light). Here are instructions for firmware flash: https://www.sony.co.th/en/electronics/support/articles/00032661
A