I have just purchased the Samsung Q800T 8k 75" TV, however I was looking at the Sony AG9 OLED 77" model and really liked this however was put off by stories of screen burn on the OLED TV's. I will not be using the TV for extensive gaming purposes, maybe a few games of FIFA for at most about 3 - 4 hours per week, otherwise the TV will be used to watch virgin media channels, Netflix, Amazon Prime etc.. I was amazed by the picture quality of the Sony and I am now thinking I may have been overly cautious by not going with the Sony, can anyone advise if the OLED screen burn is a real problem outside of gaming for hours on end, or is it better to stick with my choice of the Q800T 8k by having a model that is not prone to screen burn and would future proof if 8k was to become more widely available in the future?

Any help and advice is greatly appreciated!!

For your usage no. We have a thread on here on OLED Burn In Risk.

Actually, in the example I use in the thread, a test done by rtings.com FIFA was a game that saw burn in before call of duty; this all when played 8h a day after a prolonged test they did.

Week 90 (11/15/2019): The burn-in test was resumed on 10/17/2019. Photos have been retaken today after four more weeks. At week 90, the live NBC TV has started to show a similar shape in the center of the screen to the Max CNN TV at week 36 (Live NBC Week 90 vs Max CNN Week 36). A grid uniformity issue is also starting to appear in the FIFA TV, which may be burn-in from the player selection screen after almost 10,000 hours of game time. Test settings have also been clarified in this article.
Click to expand...

They did have an earlier issue that LG said was fixed, baring in mind this was a test using 2017 models and the AG9 is a 2019 model from a different manufacturer, I'm sure this issue doesn't exist. You can read the full details here: 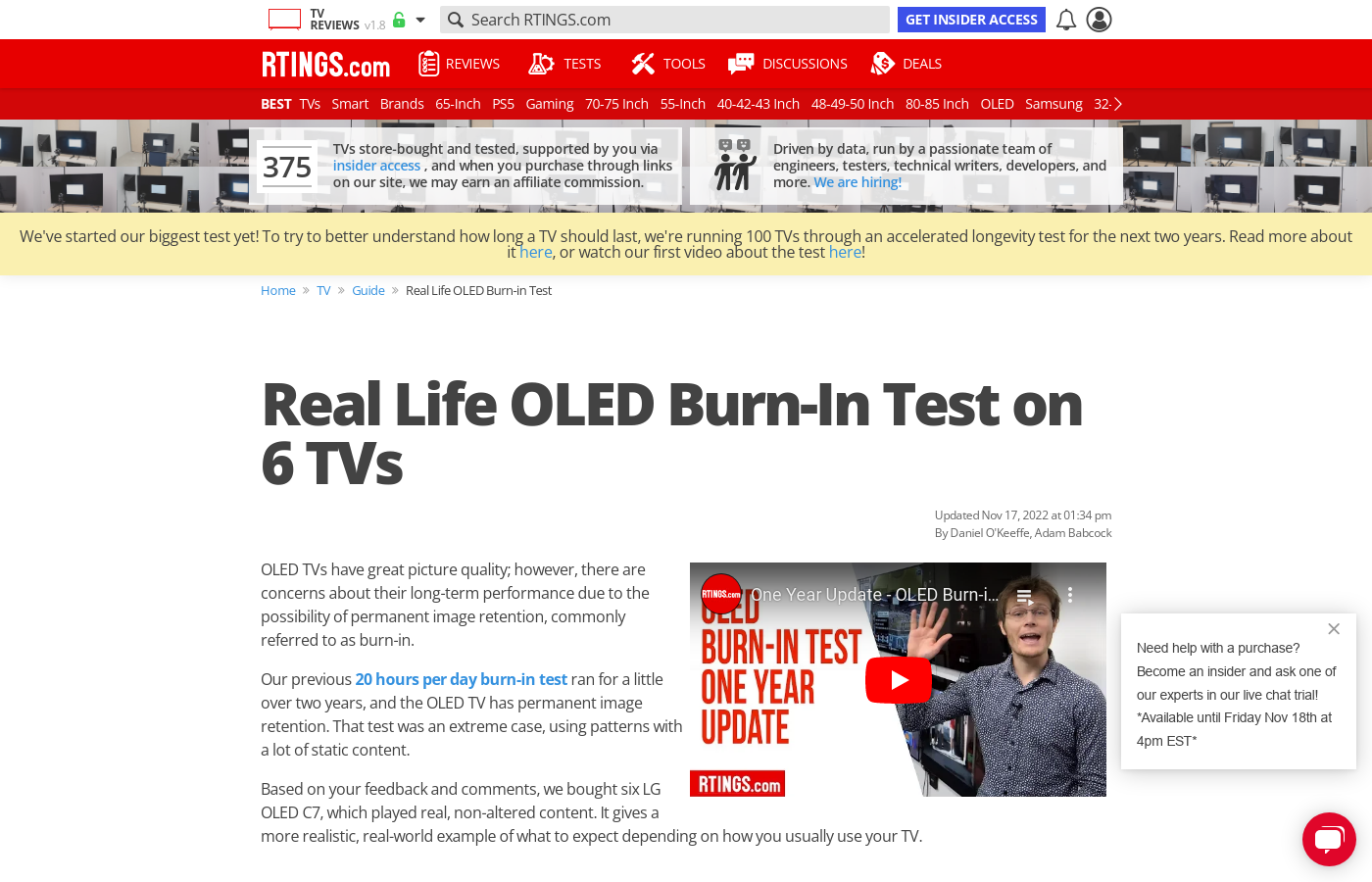 There are concerns about OLED long-term performance due to the possibility of burn-in. We bought 6 LG OLED C7 to play real, non-altered content. It should give you a better idea of what to expect depending on what you watch on your TV.

If you take 10,000 as a baseline, you can calculate prospected burn in. Using 4h each week would mean 2,500 weeks in total which comes to about 48 years.

So is burn in an issue? Not really. Its dependent on how you use the TV and a product of the technology. It was the same discussion when Plasma TVs were considered instead of LCD TVs, and the principle remains the same today.

Regarding the Q800T, its broadly similar in performance to the 4k Q85T but with 8 resolution. It is future proof in the respect it comes with a HDMI 2.1 port or two which the Sony AG9 lacks, its future proof in the respect you can use an 8k 60hz signal too, but I don't think 8k is really a necessity at larger sizes. Most people don't view close enough to a 77" TV to even benefit from 4k.

So if you want to retain HDMI 2.1 features like VRR then perhaps consider LGs CX or C9 instead.
Read My TV links & guides
Please don't forget to include these details if you want to ask for a TV recommendation!
My opinions expressed here do not represent those of the AVForums or its associated websites.​
C

hectorbeer said:
Hi,
can anyone advise if the OLED screen burn is a real problem outside of gaming for hours on end,
Click to expand...

Yes. 2017 LG B7 here, gets hammered to death as I'm on nights so up to 15-20hrs a day of usage is not uncommon. Mine also puts up with some of my mammoth gaming sessions including several hours playing the same game with the HUD components showing (Call of Duty, Fortnite, Cuisine Royal, Battlefield 5 usually) and I have zero burn in issues.

In regards to the 8K QLED vs 4K OLED I watched a video a while back comparing the two and three experienced reviewers/calibrators sat just a few feet away from the TV could not tell the difference. Apparently light bleed between pixels on the QLED makes it appear no better resolution than 4K. When they showed a test pattern of alternating very narrow black and white vertical lines the majority thought the OLED was the 8K TV. This is because on the QLED the edges of the black lines appeared grey and less defined due to the light bleed. The combination of more defined edges and higher contrast ratio of the OLED made it seem the higher resolution.

Sods law my viewing history doesn't go back enough and there's now tons of 8k QLED vs 4K OLED comparison videos that don't do this kind of blind test.

L
Looking for a 65-75 recommendation

F
I have found when considering a smaller size in the OLED model ranges from LG and Samsung …. Can mean lesser specs…