1)This is my first home a/v setup and so far it's gone pretty smoothly. This has been my first hang up so I am posting here in hopes someone has seen this behavior before and can offer some recommendations (I reset the head unit multiple times, however the problem still appears on a very consistent basis) (other sources of audio do not have this problem, it's only when I connect optical out where this crops up (such as tuner for example, Ican select any equalizer i want for that.. but when I attempt to change EQ on my optical input, it doesn't cooperate... just says NOT AVAILABLE. Unfortunately, that's the only way I can connect to my PC right now as it does not have optical outs on it's sound card, or any other digital connections for that matter (hence I had to use an HDMI audio extractor). And I don't have a DAC so this is the only viable way I can connect it right now and still have digital input. You might be asking why I don't just use the HDMI from one of the GPUs as a source for audio? Well, it works, but if I do it that way, but the HDMI signal gets slightly blurry when I connect the second monitor up. Can't afford to lose resolution like that and this seemed to be the appropriate action to take to have everything running at it's best.

2) My configuration is :
Computer side:
two GPUs from workstation PC (each GPU having one HDMI output.
One HDMI GPU connects directly to monitor #1, other goes from second HDMI GPU to HDMI audio extractor (where audio is converted to optical out.) I can then use a standard optical out cable to hook up to my Yamaha A/V receiver.
I have the HDMI for my second monitor coming from the HDMI out on the audio extractor. this system worked fine for the past three weeks in which it's been setup. This allows me to tap into the HDMI signal to keep a digital signal arriving at my A/V receiver. I would have

However, last night I made a few small changes. At first I thought it was some configuration changes I made that was causing it but I did a hard reset and still same problem. Please help me figure this out. Will post pictures of my setup later. I am using small Logitech Z5500 front/surround speakers and a Klipsch RS12W 12" 200watt RMS subwoofer.


EDIT: Two other quick things.
The A/V receiver will sometimes work fine. That is, give me the ability to chose any EQ for my likening. second, while this problem is occuring, the sound will cut out for about 1/2 second for unknown reasons. seems to be steady but the blockout occurs about every 10-15 minutes.... but there is no other distortion in signal. Just sucks I cannot use my 7 speakers right now.
Last edited: Jun 19, 2022 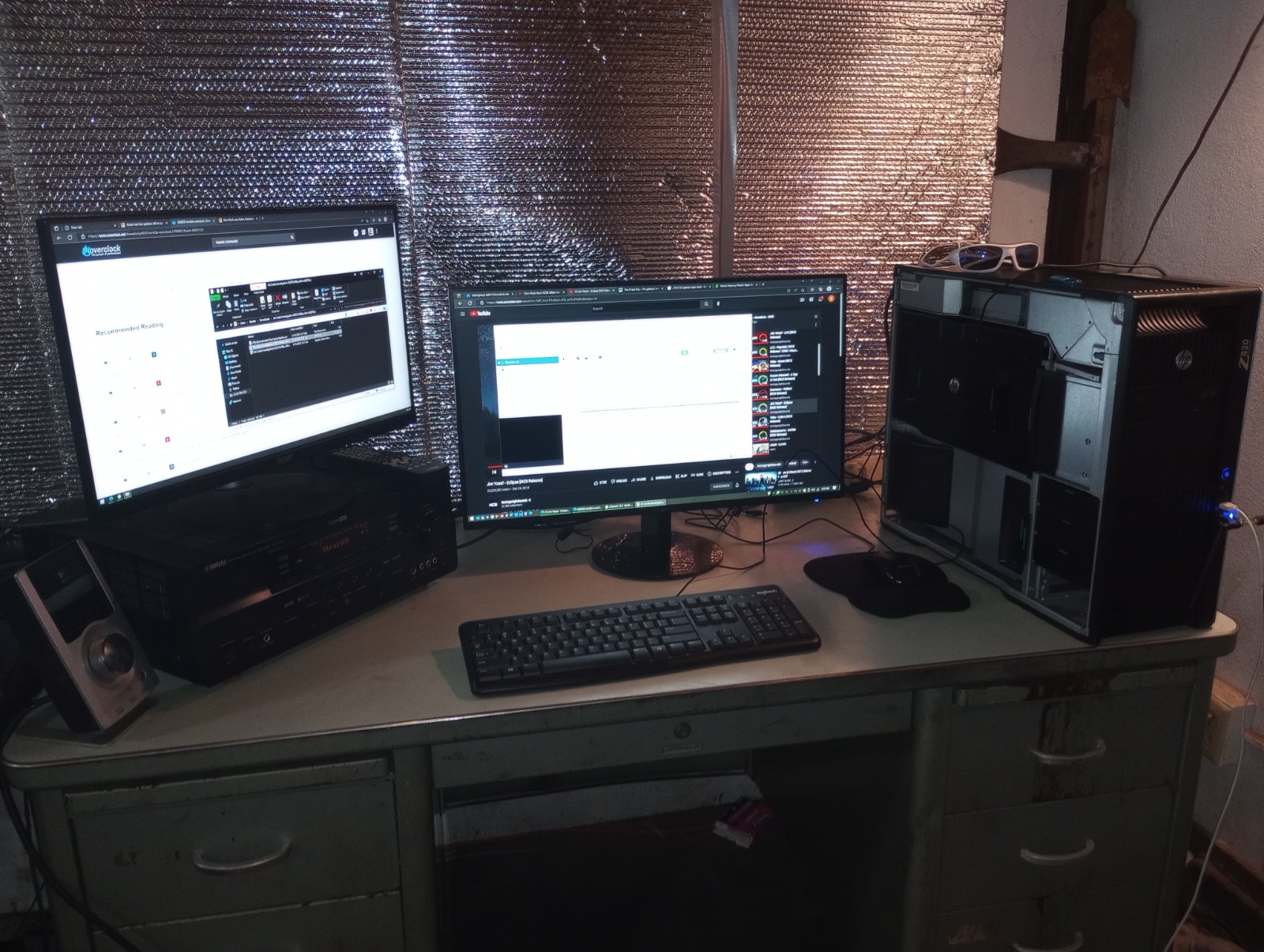 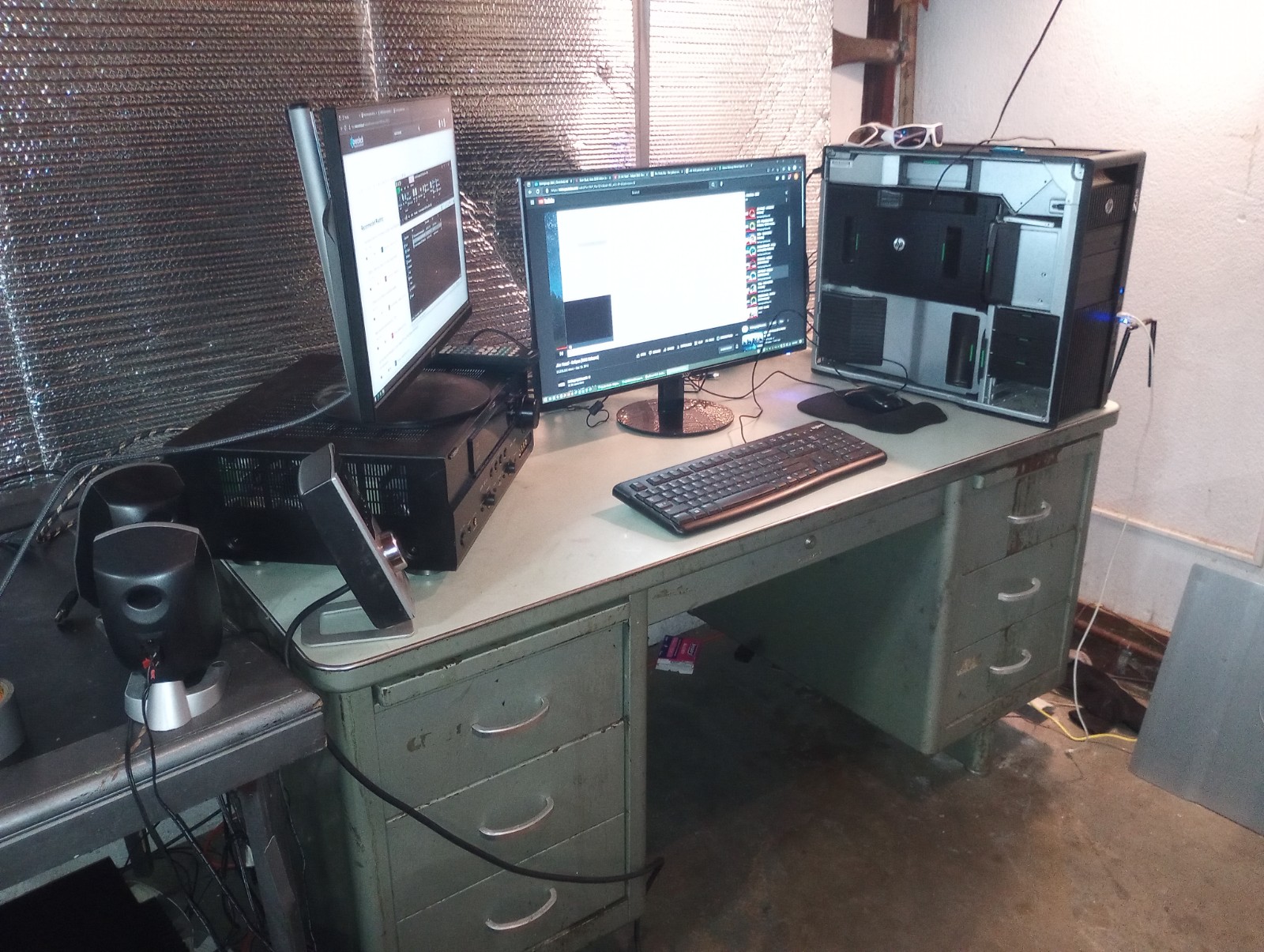 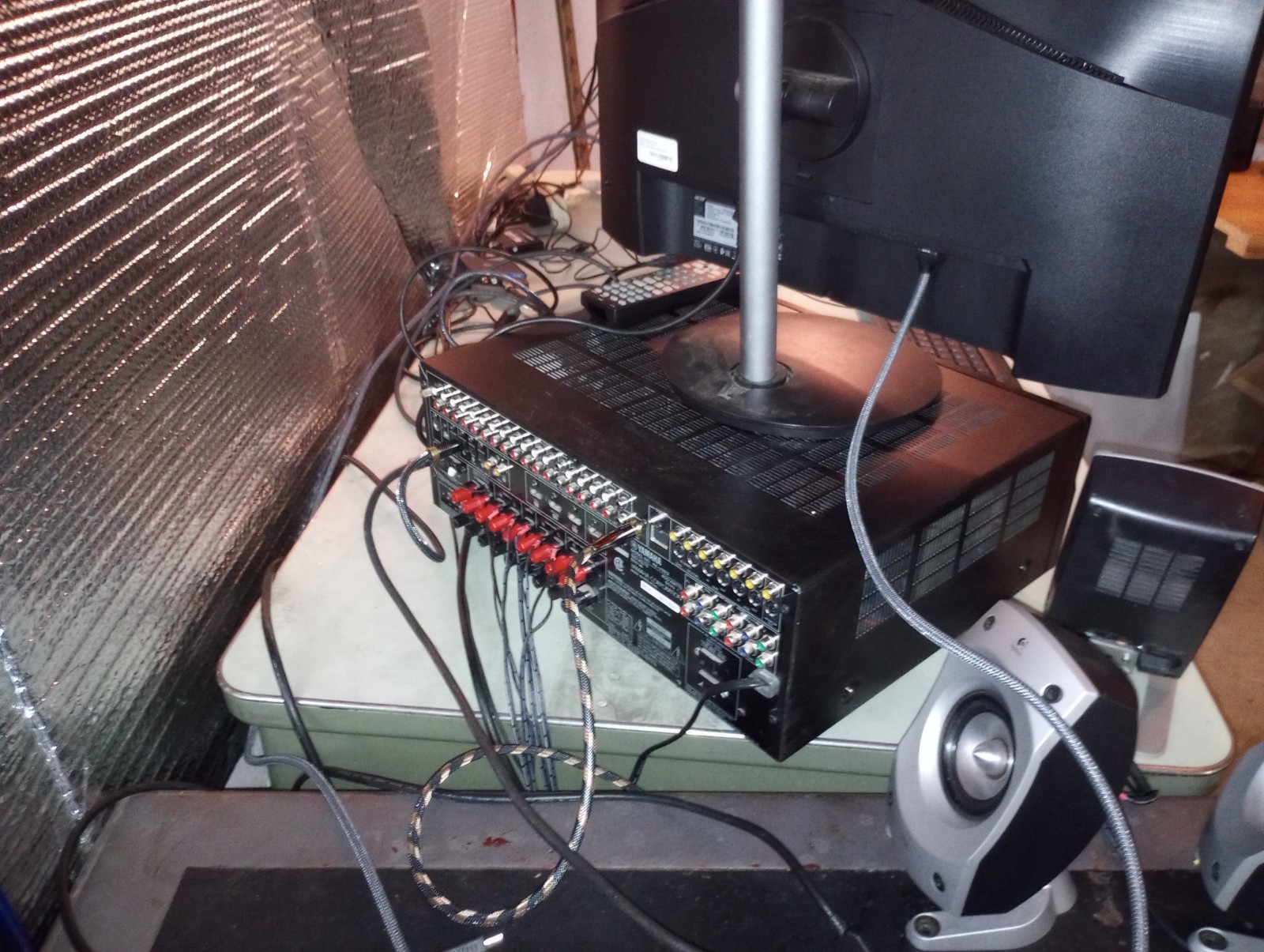 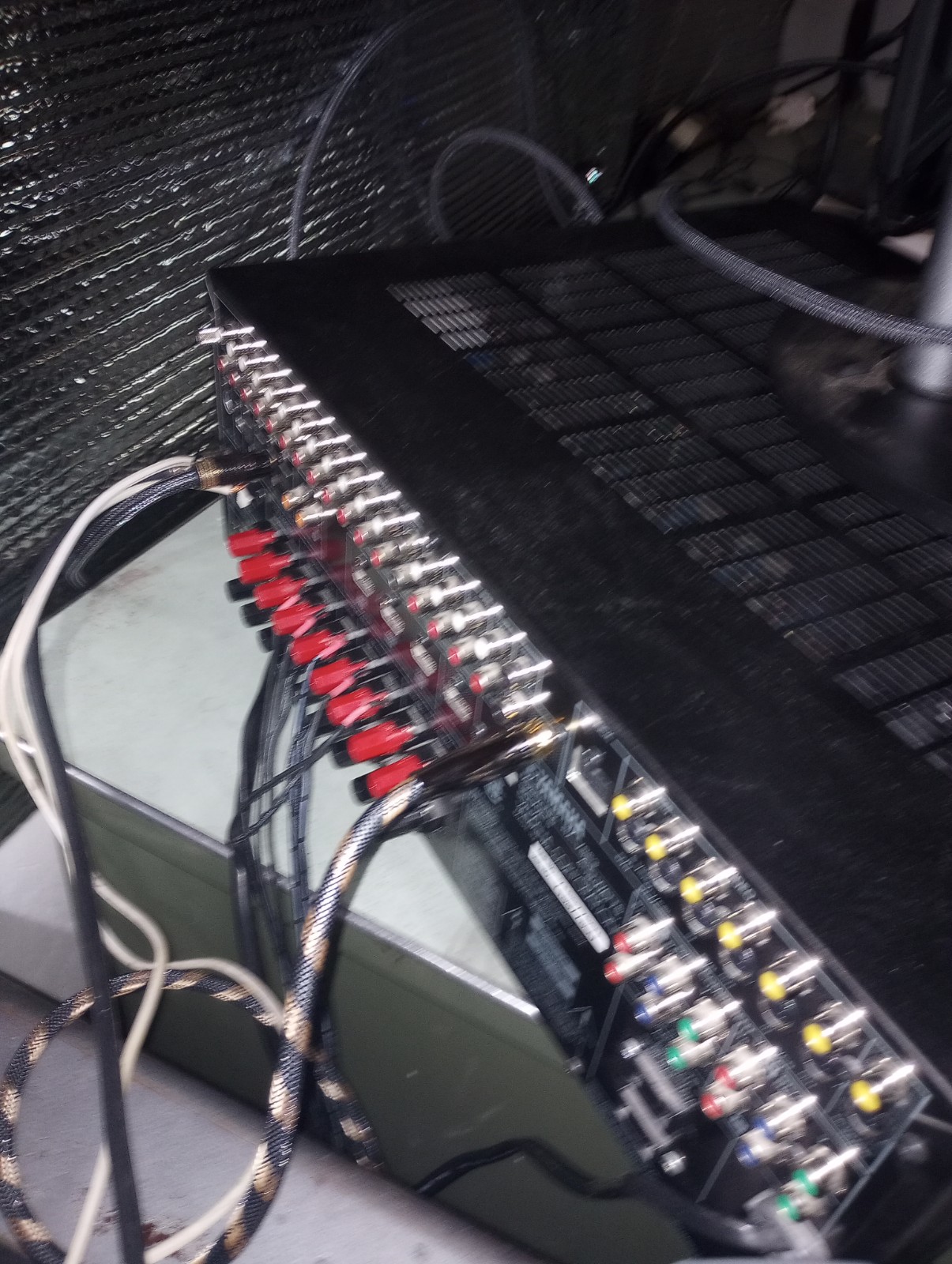 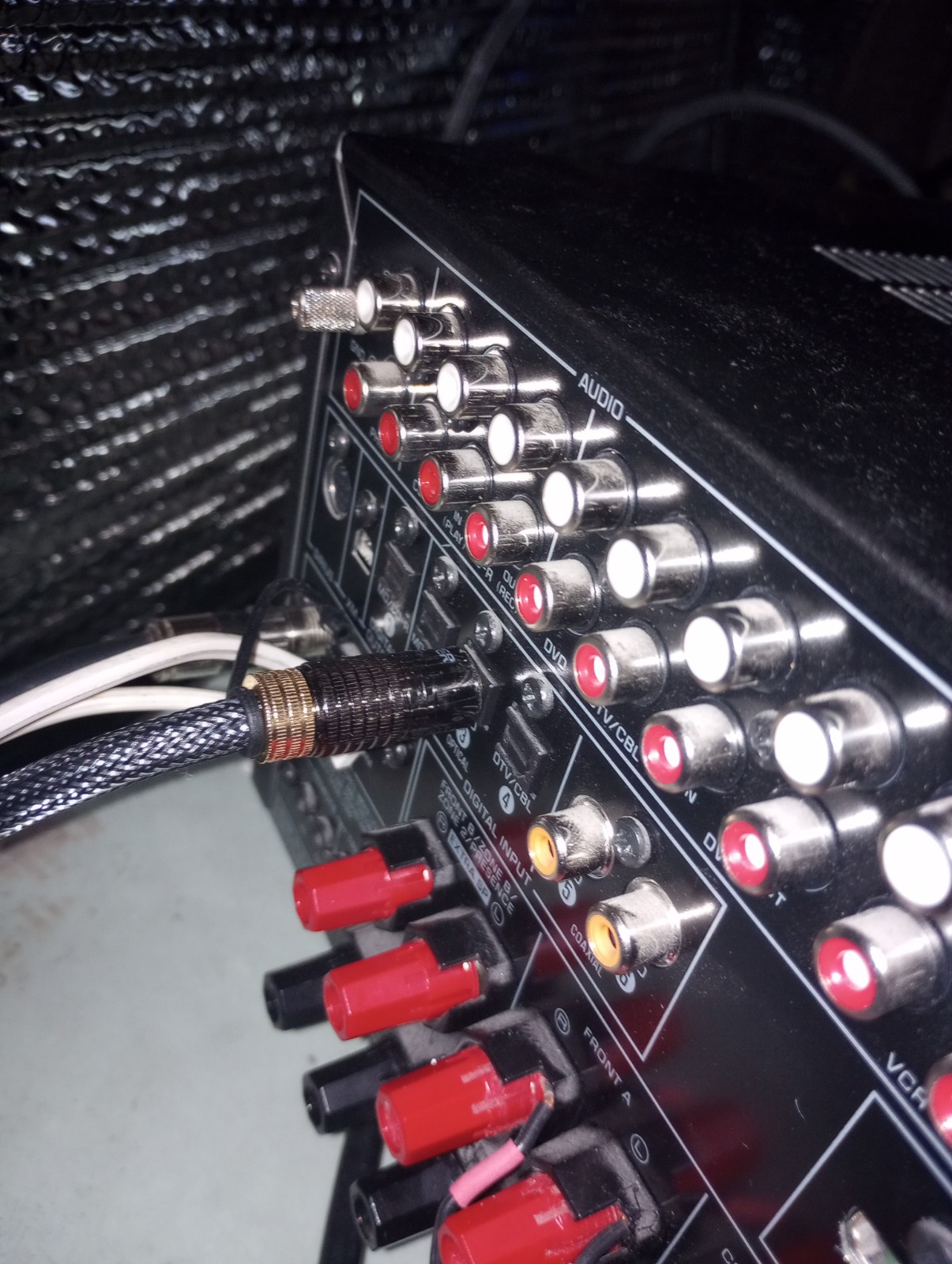 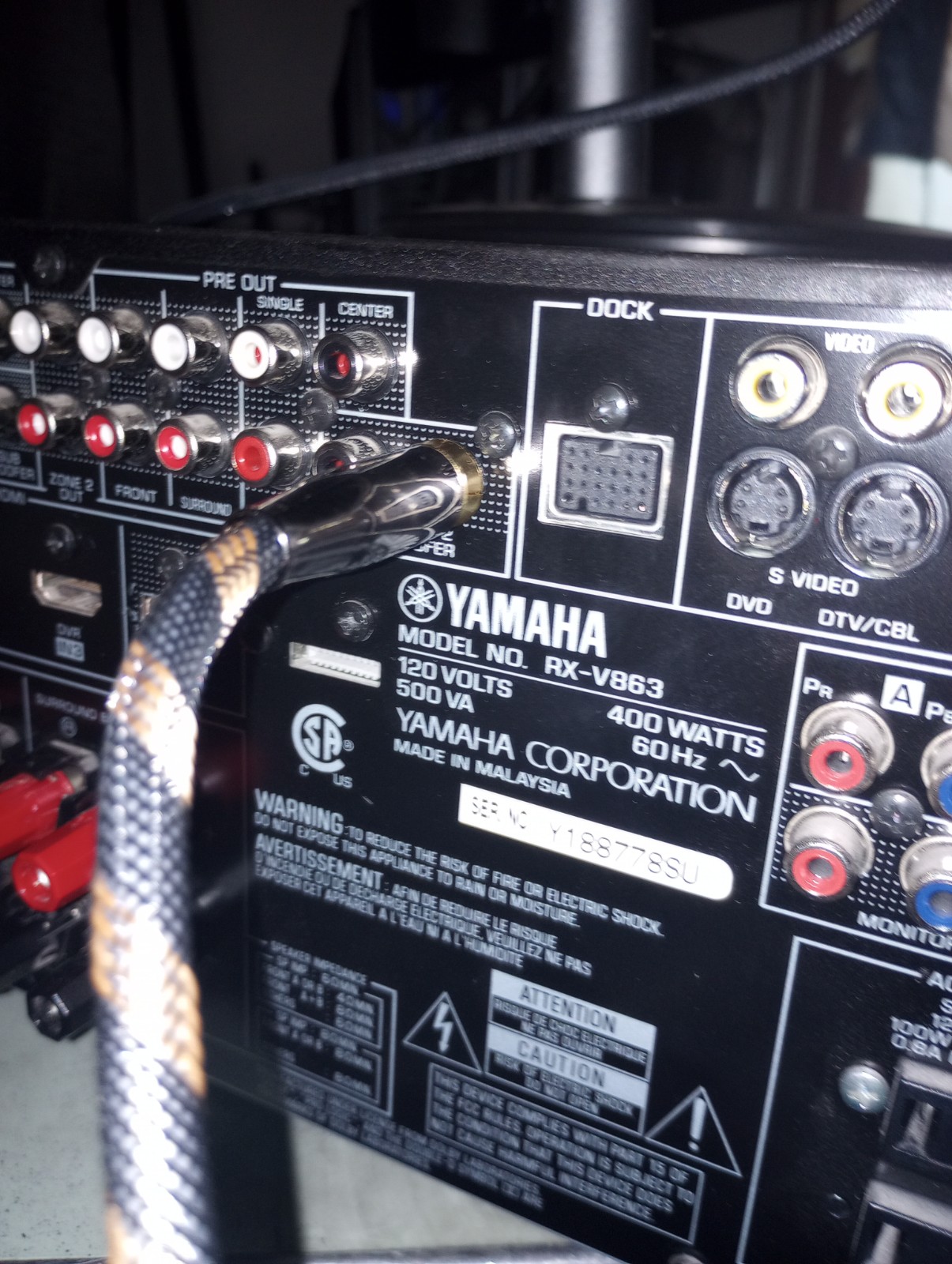 GPUs are Nvideo GeForce 710GTs
Computer is a dual processor Z820 HP workstation
Monitors are Acer. Hopefullly these pictures will give you a better understanding 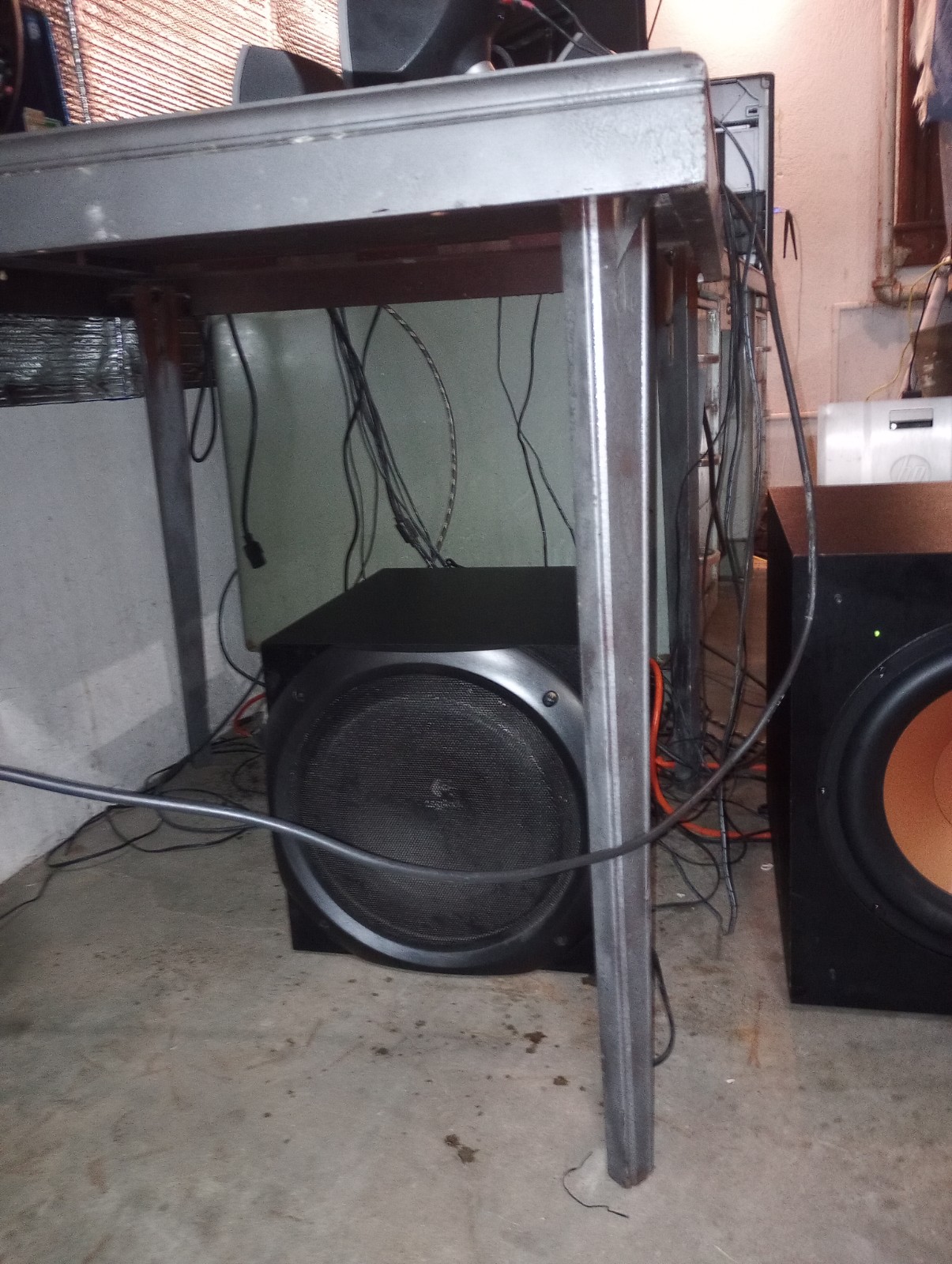 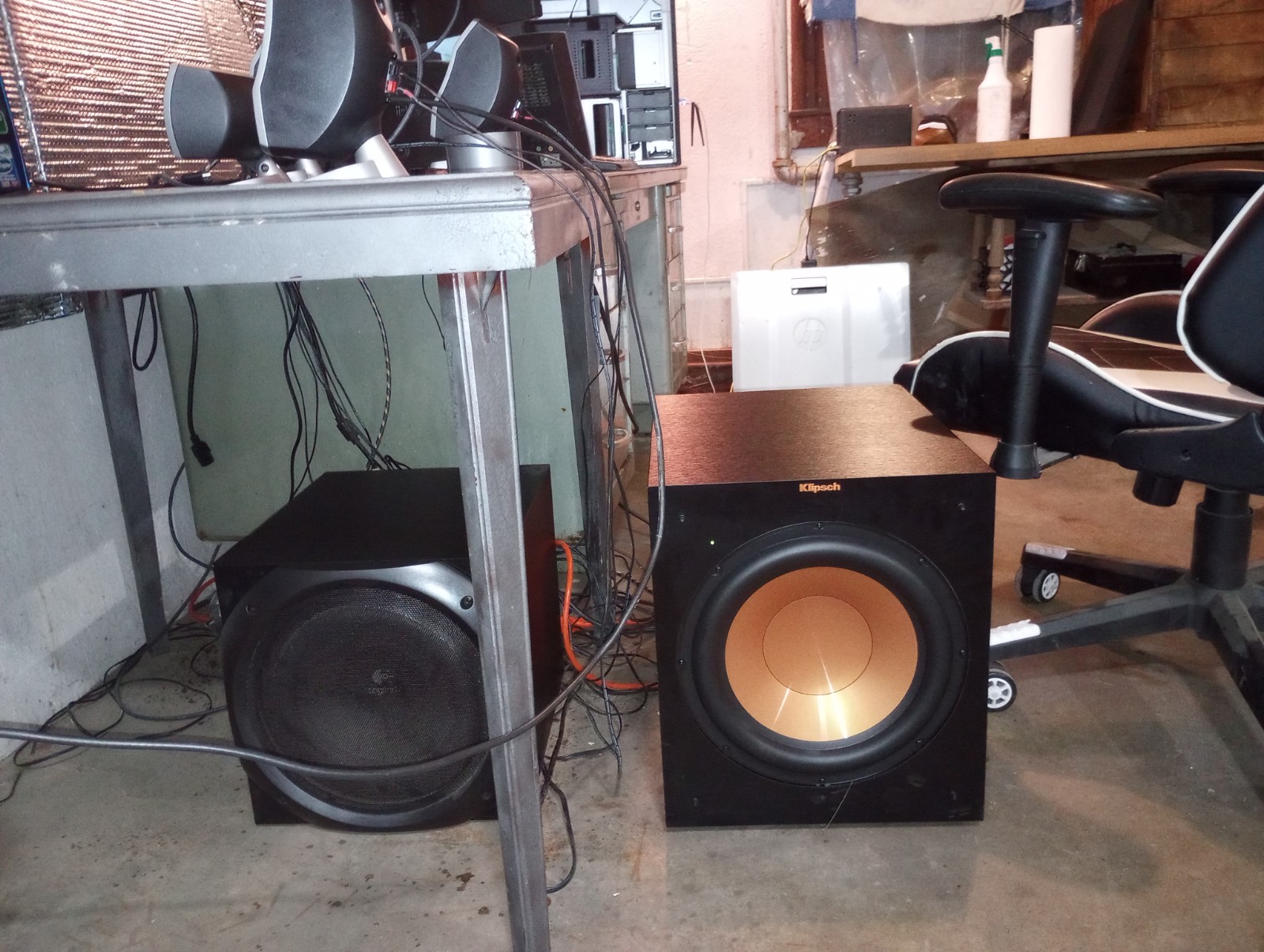 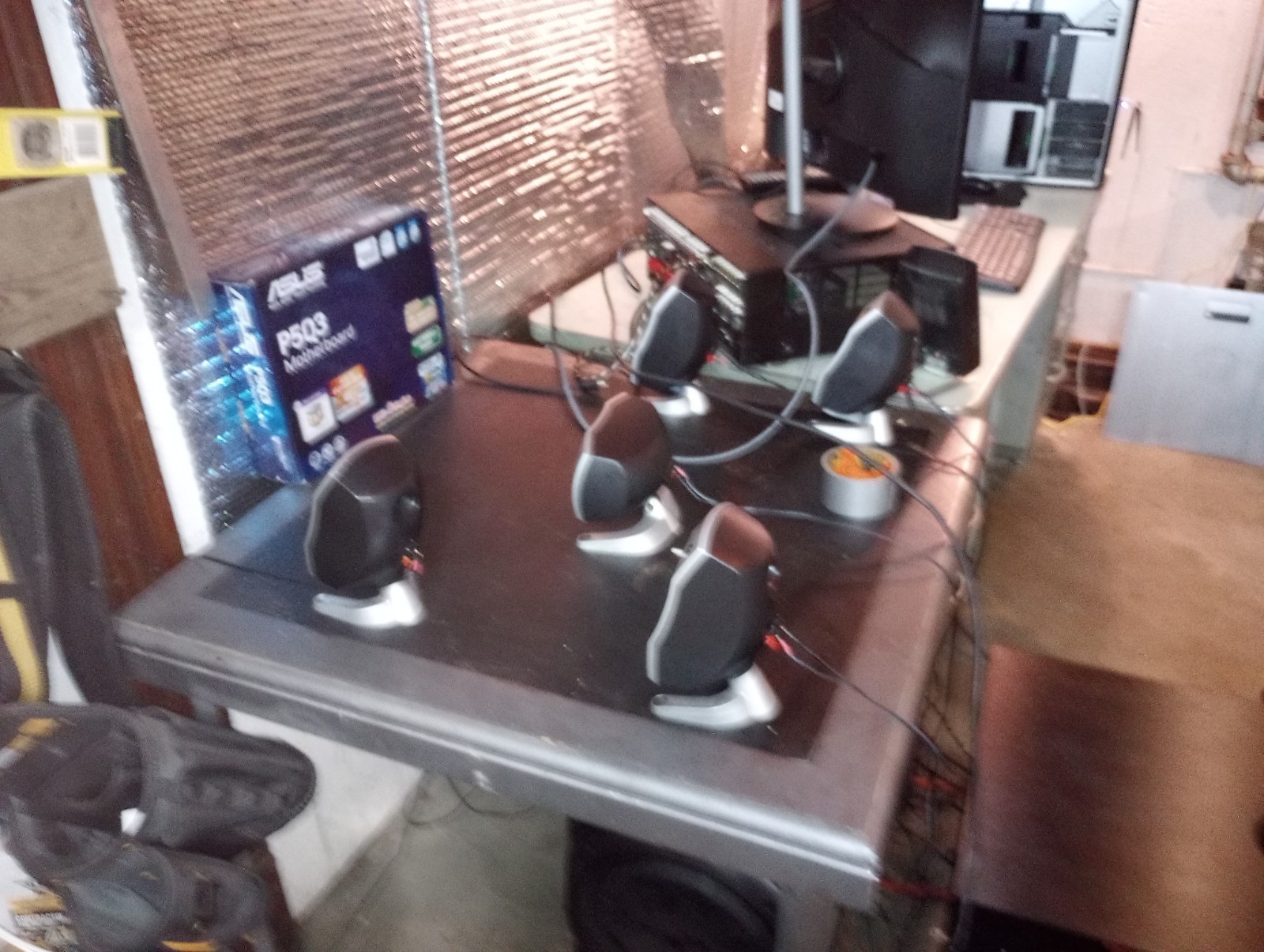 I'd be more concerned about the blurred video you say you get when you split the HDMI signal. That shouldn't happen unless one of the monitors is less able to portray the source. In such cases the source device reads the EDIDs of all HDMI devices it detects and will only output video that is compliant with the least capable devie's capabilities. Probably why you get a lower resolution on both monitors because the source is probably outputting a lesser resolution? Splitting a digital source doesn't degrafe the video.

There's tecjnocally no reason why you shouldn't be able to apply the PEQ filters to audio sourced via optical.

Note that you shou;d br connecting sources to the digital input and not the digital output. You should also ensure that you've set this input to your requirements within the AV receiver's I/O ASSIGNMENT settings. You'll find details of these on page 85 in the owners manual.

Theonly real time you'd not be able to change or apply PEQ is if using the PURE DIRECT mode, byt resetting the receiver would have removed this had you muistanely invoked it.

Have you actually run the YPAO calibration using the mic? PEQ is not active prior to doing so so you'd iobviously not be able to apply these filters unless you've run the calibration.

You can select “AUTO PEQ” only when you carry out “AUTO SETUP” in advance (see page 32). In this case, “AUTO PEQ” is automatically selected as the default setting.
Click to expand...

That is something im going to purchase the with my next paycheck. I definitely want to do the auto setup over the manual set up. In point of fact it is now just stuck at straight in terms of EQ manipulation.

Yeah, sorry, I did connect the digital output on the HDMI extractor to optical input on the receiver. That was probably unclear from my posts above.

I'm a little baffled by the HDMI thing as well. In fact that's why I changed some settings and wiring last night, in hopes of getting the system set up with HDMI instead of optical out.

You cannot engage the PEQ filters unless yoiu calibrate the AV receiver using the mic. You've basically only the GEQ manual EQ settings if you've not run the calibration. The NATURAL, FLAT etc curves aren't activated unless you've given the AV receiver information regarding your room's EQ resposes. The filters try to correct any issues and tie this in with the PEQ target that gives you the corresponding NATURAL. FLAT etc results.

dante01 said:
You cannot engage the PEQ filters unless yoiu calibrate the AV receiver using the mic. You've basically only the GEQ manual EQ settings if you've not run the calibration. The NATURAL, FLAT etc curves aren't activated unless you've given the AV receiver information regarding your room's EQ resposes. The filters try to correct any issues and tie this in with the PEQ target that gives you the corresponding NATURAL. FLAT etc results.
Click to expand...

Okay so I just wonder why it has been working fine over the last couple weeks no problems?

But at least you've given me confidence here that the problem can be solved with auto tuning so when I get paid I will pick up the mic.

Alright, I have partially have it figured out. Which explains why the hard resets didn't work. Because it was a problem with the computer and that HDMI setup, NOT anything to do w/ Yamaha receiver.

It appears when I moved my HDMI setup back into place it changed something changed with the HDMI driver and it for some reason was creating that problem when I put the second video card in, and even when I pullled the second GPU, it was still having problems. I know the source was fine because I had no problems with the optical because I could definitely use the HDMI extractor to convert to optical, however, it was always stuck in straight mode with the EQ disabled now. but after selecting one of my spare Z840s Installing w10 and two gpus, all is well again.

I am hoping to get a sound card with both optical out and HDMI out to eliminate this problem from ever happening again.
You must log in or register to reply here.

L
Can I get sonos to power my yamaha receiver on when I start streaming music?

LG C1 - LG support says the C1 optical out is stereo only - is this right?

No audio from centre when set to direct (marantz Sr6012)
2