Would anyone recommend this show, is it any good??

Hawklord said:
It's an excellent show and I thoroughly recomend it.
Click to expand...

Agreed, top show, the last episode of the last season was brilliant, one of the best ending to a show ever.
Two manky hookers and a racist dwarf. I think I'm heading home.
How I got MS to repair my RROD 360 outside of warranty.
Xbox Live - Tyler Durden UK PS3 - TylerDurden-UK
D

TylerDurden said:
Agreed, top show, the last episode of the last season was brilliant, one of the best ending to a show ever.
Click to expand...

I'll second that. Six Feet Under is a fantastic show. Introduced the missus
too it while she was off work sick and she didn't move from the sofa for
the next week
P

it is a brilliant show, but you should watch dexter season 2 first!
My setup

Six Feet Under Was/Is one of my favourite series of all time, the last episode was the best ending episode for a series ever.

Music: Now i just sit in silence |Games: Rip and tear, until it is done |TV: Jesus, what kind of a preacher are you!?
My opinions expressed here are not necessarily those of the AV Forums or the associated websites​

Pezerinno said:
I recently bough the boxset of this so looking forward to watching it as soon as I've finished watching the arrested development boxset I bought last month
Click to expand...

Arrested Development then Six Feet Under. Thats some quality watching there !!

Obviously another that would recommend SFU here. I only watched it last year when it was being re-run and it was excellent.

Another Peter Krause show worth getting into is Sports Night from Aaron Sorkin who subsequently created West Wing and, more recently, Studio 60 on the Sunset Strip 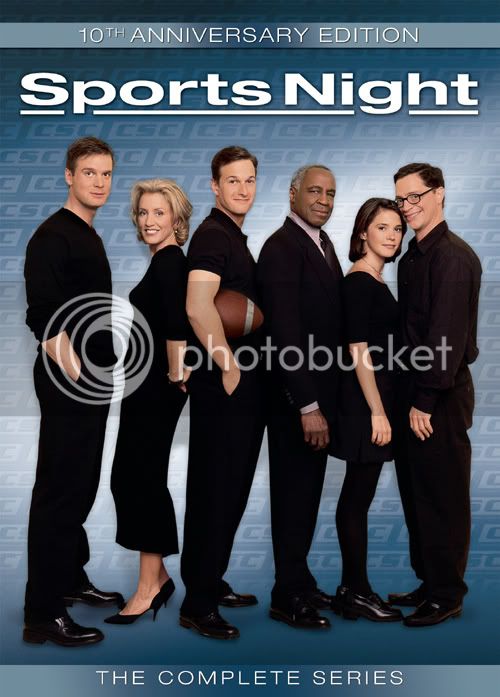 Hey Krish, thanks for the info. I keep hearing about Sports Night mainly due to my love of The West Wing (recently bought studio 60 boxset but haven't watched it yet).

Arrested Development then Six Feet Under. Thats some quality watching there !!

Obviously another that would recommend SFU here. I only watched it last year when it was being re-run and it was excellent.
Click to expand...

Sorry to go somewhat off topic but just finished Arrested Development today (watched the whole boxset within a fortnight) and it was absolutely hilarious - deffo in my top ten tv shows.

Pezerinno said:
Hey Krish, thanks for the info. I keep hearing about Sports Night mainly due to my love of The West Wing (recently bought studio 60 boxset but haven't watched it yet).
Click to expand...

I bought Sports Nightl knowing nothing about it other than it was a Sorkin project and that TWW is one of my all time favourite shows.

I intended to watch maybe a couple of eps of SN a week, enjoyed it so much, I watched the whole thing over the space of two or three days

Just to keep on topic for the thread, I agree with what's been said already SFU is great and the series finale is indeed the greatest ending to a show ever
Xbox Live Goooner1, PSN MonkeyGooner

Have just finished this and by and large enjoyed it.

Some mixed feeling though. Difficult to love in its entirety when I foudn anything to do with Brenda and Nilly boring as hell. Just wanted Brenda to drop dead!

The last episode was as good as many had previously mentioned. Although I wasn't keen on
Rico starting up on his own or how they jilled Keith off.

I am now waiting for Sopranos on Sky Atlantic...although I might sneak in the shield before then!

scrapbook said:
Have just finished this and by and large enjoyed it.

Some mixed feeling though. Difficult to love in its entirety when I foudn anything to do with Brenda and Nilly boring as hell. Just wanted Brenda to drop dead!

The last episode was as good as many had previously mentioned. Although I wasn't keen on
Rico starting up on his own or how they jilled Keith off.

I am now waiting for Sopranos on Sky Atlantic...although I might sneak in the shield before then!
Click to expand...

The Sopranos is brilliant. You should also check out The Wire and Deadwood and Justified If you have not seen them already.

Just started watching this for the first time...enjoying it so far, up to series 1 episode 11

Supporter
One of my all time favorite shows, very jealous of anyone experiencing this for the first time!!

Not sure whether I should ask this or not but, assuming its not a 'spoiler' as such; does somebody new die at the beginning of each episode?!

Still quite surprised this show escaped me for all these years

I just finished season 1 too, Coffin. It's an excellent series, although it's like being on an emotional roller coaster! At times I find it hilarious, like when David put Ecstasy in the medicine bottle and Ruth ended up taking it accidentally, and at other times the show is very profound and either depressing or inspiring.
I agree about the end of season 1. I was expecting something more dramatic, what with Billy's terrifying mental problems, but instead the director was sending the audience a message, namely that life is for the living and we should stop worrying so much about other things and get out there and enjoy our lives. Or something like that. Anyway, I was kind of expecting this song to start up at some point in the final episode!

I fear for Claire and her relationship with Gabe. He has a self-destructive personality and I think it will have a pretty negative impact on her own life. I can't see him lasting long.
It a fantastic series. I've heard other people mention that it has one of the greatest ending of any series they've seen. I'm looking forward to completing the series. I think I'll probably have a tear in my eye at times, but they'll be lots of laughs and positivity along the way.

Glad you enjoyed it too Stockholm!

I too have heard the same about the ending..it intrigues me as to what happens but at the same time, you want to make it last as long as possible! (although I watched the first 2 episodes of series 2 last night )

What do you make of Brenda?!

Hey Coffin. Hope you're enjoying season 2. Will need to start on it soon but I've been enjoying Entourage so much recently that I can't wait to watch another episode. It's funny going from SFU to Entourage (male equivalent of Sex and the City).

Brenda. Nuts and intense but still has a little something about her that is quite endearing.

Think Nate will have a difficult time with her as she likes to push people to their limits, and her dislike/distrust of authority and social norms means that she is probably going to get herself into awkward situations now and again.


Her stunt at the competitor's mortuary was actually quite unnerving and I'm surprised Nate didn't tell her to beat it at that point. Pretending to be a terminally ill cancer sufferer looking to arrange their own funeral was just downright disturbing
ps Sorry about the spoiler in my previous post. Forgot that even old shows like this still need to be checked for spoilers...

I've just started Season 3 having watched 1 and 2 for the first time in a little over a fortnight!

I was stunned when
the premiere in 3 indictated Nate had died. It was somewhat true to the whole premise of the show so far in the way the writers toyed with us for those few minutes
!

Maybe I need to watch it again. I have enjoyed virtually every epsiode of the 5 series but the finale seemed to disappoint, despite being lauded by many as one of the best series finale of any show, ever

The ending was almost a parody of itself. Although maybe it is impossible to end any highly crititically claimed show to everyones taste

Or maybe I'm just sad to see it end

I thought seasons 1 & 2 were terrific, but was then very disappointed by season 3 and didn't watch any more. I've read that 4 & 5 were much better again, but have never got around to picking it up again. I'd probably want to start from the beginning again, but there are so many other things to watch and recently I haven't been watching that much, so they are starting to pile up...

Hey JOakey. I know what you mean about having so much to watch (I've now got all of Dexter lined up, again having never seen a single episode!) but I thoroughly recommend SFU. I thought series 3 was good, overall the quality of the writing and acting throughout the show was exceptional

Season 3 is the weakest season but I didn't think it was that bad. It's worth sticking with SFU for season 5 which is brilliant and devastating and I think it has the best send off of any TV series ever.
You must log in or register to reply here.