It was co-written by AICN's Massawyrm, aka C. Robert Cargill


Early reviews stated it's a stupid film, but heavy on scares 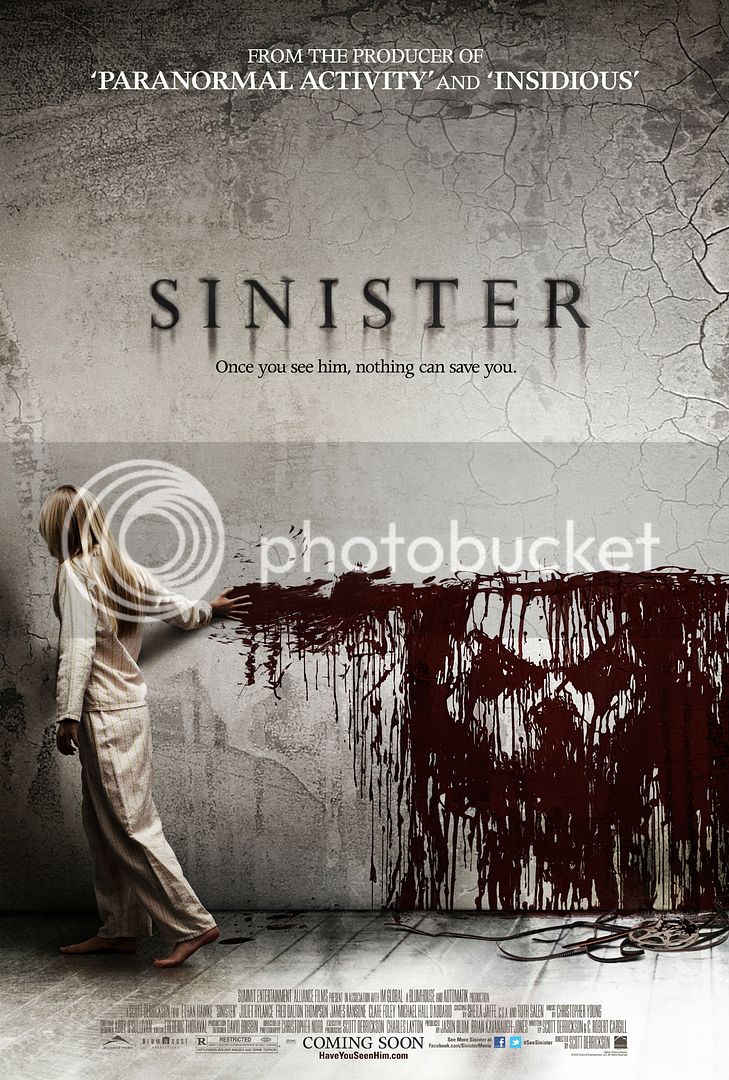 I saw this at Frightfest and wrote about it on the horror movie thread. It's pretty good until it falls apart at the end. I'm a little tired of child actors with too much "creepy" make-up trying to look scary in modern horror films and I'm only not spoilering this because the poster above doesn't.

As to the reviews, the film is no more stupid than most supernatural horror films and they have been very positive. So far this has 100% on rottentomatoes, which is rare for a film like this. It's definitely a cut above and for much of its running time, quite scary and even original.
Last edited: Sep 5, 2012

I also saw this at Frightfest and agree with Todd. It's got some creepy moments and made plenty of people 'jump' numerous times throughout. I particularly liked the parts with the Super 8 footage.

Personally I think it's a far better and more enjoyable film than Insidious was which I didn't care for at all.

BOOOOOO!!!!! Did I scare ya, did I scare ya, huh, huh??? That's pretty much the "imaginative" technique used throughout this immensely dissapointing entry in the supernatural genre.

Yeah, I saw this tonight, they marketing lot introduced the film to us claiming this was a first preview screening...umm, saw what did see Todd and Vinvader see then, a 2 hour trailer? Bunch of liars those marketing lot! They tried to get us in the mood by calling on several volunteers to sit at the front wired up to measure their sweat and heart rate to prove how frightening this film is.

But what a disappointment, I thought I was in for a scary film but quite frankly you'll get more jumps from a popcorn machine than in this film:


The problem is not so much that the jumps were cheap BOOO moments but they were so typically placed and signposted that most of the jumps had no effect. Sure there are 2 or 3 moments of BANG!, THUMP!. You know how when you go on a ghost ride at the fun fair and men in custumes come out waving their hands saying mwahaaa or BOO? Well they flipping do that in here! Unbelievable. Except here they use the Japanese horror movie (like Juon) style imagery but with far inferior execution.

So what about the story. Well actually its ok, there is much intrigue and mystery but you only get a progression of revelations in the last 15mins or so but its ultimately unsatisfying. Ethan Hawke is excellent though, in fact all the actors were pretty good but something was missing, I didnt really care for them. The only character I really charmed to was a dopey policeman who provided some much needed comic relief as being a fan of Ethan Hawke's character (who plays a crime investigator writer).

But that's all the positive I can extract from this mediocre film. I give it a 5/10, its not that bad, there is some enjoyment to be had but not in the areas where it supposed to matter.

At the end of the movie, absolutely no one clapped. No one. Usually there is at least a respectful applause at preview screenings which are hosted by members of the film crew but the only sound you could hear was some sniggering as the audience headed out fast to the exit doors. No one cared what the result of the wired up volunteers were. Actually, from what I could see, they looked like they were uh, asleep?...I hope they didnt electrocute them just for marketing impact. Naa, they wouldnt go to those lengths, would they?...would they?!?
Last edited: Sep 13, 2012
PSN: THEYCALLMETEJ (for PSVR Racket Fury table tennis matches)
I own: PS4 Slim, PSVR, RIFT, Panasonic TX-LXXDT65B 55" TV, Yamaha rx-v767 A/V, 7.1 speakers, Sony Xperia XZ Premium. Nvidia GT970, HTPC, Firestick, Steamlink, Chromecast, Virgin 150mbs fibre.

I'm still looking forward to this, I love a good horror but there aren't many around. I did enjoy Insidious
(until the poltergeist tribute started)
The wife nearly crapped herself during the trailer at the cinema, although she's a complete sap about horror films.

I am looking forward to seeing this, as it has been getting some great reviews. Horror is my favourite genre too, and good films in it are few and far between.
​
​

richp007 said:
I am looking forward to seeing this, as it has been getting some great reviews. Horror is my favourite genre too, and good films in it are few and far between.
Click to expand...

I guess on release day somehow i'll end up watching it too, though not 100% sold on it yet

Watched the trailer of this when we saw Lawless . Not usually a film I'd watch at the cinema but even the trailer sent a few shivers through us and was quite impressed. After reading the review a few posts back seems we might have been taken in by it but will wait for a few more until I decide.
LG 55" E9 , Pana UB820 , Denon AVR X2200W , Bowers & Wilkins M1 5.1.2 , SVS SB 2000 sub , Xbox One X. Sky Q, Netflix, Amazon Prime.

This movie takes the cake for the biggest piece of **** of a film, I've ever seen.

Filmmakers, get it through your thick skulls, children are not scary

I'm off to have a cold shower to wash this plague of a movie off me. So depressed for having wasted £10, that I'm tempted to track down a picture of this deity and have it possess my kids, so they can kill me.

Seen this the other night and really liked it, I would suggest a 0/10 is a bit harsh no? Lol

Actually thought the first half of the movie was excellent, second half the scares got turned up and you could argue they cheapened the film a bit but I enjoyed them

ArabChris said:
Seen this the other night and really liked it, I would suggest a 0/10 is a bit harsh no? Lol
Click to expand...

Your right, I'll give it a 1, since Ethan Hawkes performance was good. Other than that though, the rest of the film resembles what I've got on my the bottom of my work boots in the porch.

Been a very good year for horror films, Cabin in the Woods, VHS and Sinister. As Todd said child actors in horror films are becoming very tiresome but nonetheless a truly creepy film. The Lawn Mower scene was the highlight for me, really unexpected.

Fingers crossed for Silent Hill, hope that turns how to be great.

MrFurious said:
I got to see this on the Weekend...very dissapointed, after seeing the trailer you might as well not bother with the movie..
4/10 from me, Ethan Hawke is a great actor, but i did laugh when i saw the main Spooky..
Click to expand...

Funnily enough I watched this last night and thought much the same. Good start which slowly builds the story and tension but then at about the halfway point, it all just seems to unravel and go into cliched horror mode and the film from that point on is ruined. Just once I'd like a horror director to buck the trend of having a house in complete darkness and then having the protagonist stumble around in the darkness looking for the source of a noise without turning any lights on what so ever.... It's a pathetic cop out and an extremely lazy way to achieve cheap scares which don't work anymore.

The ending is telegraphed from a mile away as well which annoyed me. 4-5/10
Opinions expressed here are my own and are not representative of AVForums

To ensure safer trading and to minimise the risks of falling victim to fraudulent activity, please read the trading rules. Should you have any reservations about a listing or member, please contact a moderator or use the report facility on thread​

Totally agree with the folk who say it starts well but gets silly towards the middle/end.

I found some of the scenes genuinely unnerving but was unaware of the fact that it was a supernatural film. I thought it was going to be similar to 8mm, so when the reveal came I was extremely disappointed.

After that the film and plot felt hollow and bland. The conclusion was quite obvious too.

Wouldn't recommend this at all.

Also, poor use of Ziggy from The Wire and Vincent D'Onofrio. Both are very good actors and are waster here, especially D'Onofrio.

A sequel to Sinister is now moving forward

Stockholm said:
Also, poor use of Ziggy from The Wire
Click to expand...

Podcast: Home AV, TV, Tech News & Reviews, Plus The Best of July 2020
Subscribe to our YouTube channel.
Join the AVForums team live on Sundays at 7pm.