While in the process of moving I have dusted off my Revolver turntable and intend to listen to some of the records that I now have access to. My purchase dates back to the days when I bought what I liked the look of and it has probably only had 10 hours use before being packed away in favour of my CD collection. On reflection I was listening via a particularily poor Pioneer pro-logic amp (I know!) while my CD's were listened to via a Marantz CD75SE direct into a Rotel power amp. I can't find out much about the Revolver, it would seem they had a cult following but not enough to survive the CD phenomenen. Mine is black, completely standard (arm and cartridge by Linn?). Does anyone know of a source of information about this deck?
AR The Turntable, PU7, Transfiguration Axia, Aqvox Phono II
Teac P700, Metrum Octave
Sonic Euphoria PLC, Audio Research D70 mkII, Tannoy SRM 10B, custom crossover, custom cab

A quick perusal shows them to be based in Devon. The Revolver turntable was made by Sundown Electronic Engineering in Warrington so I think they are different companies.

Cable Monkey said:
A quick perusal shows them to be based in Devon. The Revolver turntable was made by Sundown Electronic Engineering in Warrington so I think they are different companies.

Thanks Paul, will take a look.
Click to expand...

The only consistent thing about this and the previous company(s) is I think the trading name. As for based in Devon, no across the border in Cornwall (own language, flag, so they tell me & strange customs)

Cable Monkey said:
A quick perusal shows them to be based in Devon. The Revolver turntable was made by Sundown Electronic Engineering in Warrington so I think they are different companies.

Thanks Paul, will take a look.
Click to expand...

The Revolver was a very nice turntable. It was the first Turntable i baught and it was in a swanky glossy red with the rubber center puck... I always thought it sounded better with a Moth arm though ( Rega RB250 clone ). I believe the company was established in 1978... You could also get away with a fairly decent cartridge upgrade. At the time i had an Audio Technica OC5 and it was more than capable.. It's a shame they don't make them anymore though...
AV room Pioneer LX5090, Pioneer BDP55 LX BD, Wii U, Xbox360, Squeezebox Touch, Audiolab M-DAC, Thorens TD 240-2 Turntable, Graham Slee Phono Stage, Pioneer SC-LX 81 AV Receiver, B&W 805S loudspeakers, Acoustic Energy Evo centre and rears, B&W ASW750 Sub. BenQ XL2410T 3D LED Monitor, PC

Agree with Thekop - nice turntable and well worth hanging on to. Even the standard Revolver arm, which was sourced from Jelco in Japan, wasn't a bad item - if yours has an upgrade to a Linn arm - even better!
Digital downloads - perfect for children and other people who can't be trusted with delicate objects!

I have just had a listen to Sade on vinyl. A bit lighter on the bass than my cd player but rock solid imaging and great clarity. I think I am going to enjoy getting to know vinyl again!
AR The Turntable, PU7, Transfiguration Axia, Aqvox Phono II
Teac P700, Metrum Octave
Sonic Euphoria PLC, Audio Research D70 mkII, Tannoy SRM 10B, custom crossover, custom cab
T

Cheers Tazz. Those two references are the dominant ones that come up on any search. Pleased to hear that this TT is quite capable. I won't be rushing out and converting to vinyl (she who demands attention has already expressed reservations about piles of records!) but I will probably be able to get good results from the kit I have already.
AR The Turntable, PU7, Transfiguration Axia, Aqvox Phono II
Teac P700, Metrum Octave
Sonic Euphoria PLC, Audio Research D70 mkII, Tannoy SRM 10B, custom crossover, custom cab
P

website could be the same people, because if you read their 'History' etc
They mention a 'Rebel' model turntable, and also do a 'Pig2' record clamp device.
So there is certainly some Sundown Electronic Engineering connection, as they did a Rebel turntable and a rubber clamp called a 'Pig' or 'The Pig'

I got the Redwood version and got the Basik LVI arm fitted, not sure of the cartridge, but I think it was an AT65.
This was from a dealer in the Warrington area.

This was run through a Sharp Optonica SM5100 amp with Kef Coda 3 speakers, and an Aiwa cassette deck, then later added a tuner and a CD player. Set up ran from about 1986 to 1996 ish.

My sister has the turntable now, as I didn't have the room for my set up when I moved house. She is well into her HiFi and music, and probably knows more about it all than me now!
She herself had a Rega Planar at some point, but is on the look out for a Linn Sondek LP12.

I remember the deck to be lovely to look at, and equally pleasing on the ears

That original post was made in 2006. The Revolver went to a new home in France after I was given an AR The Turntable (sold as the Legend in the UK) last year. It has since had quite extensive work done to it and looks very different now. List of mods are:
Origin Live Advanced DC Motor
Rega RB900 arm,
Solid mahogany armboard,
New veneer and deep lacquer finish,
Ortofon 2M Black.

If the Revolver rekindled my interest in vinyl playback, the AR has been like pouring 4 star on to the flames! Restoring and modifying the turntable has been both immensely satisfying and has taught me a great deal. The AR is now the finished article but I have enjoyed the process so much I am already rebuilding a Thorens TD150MkII with a another project in the pipeline! 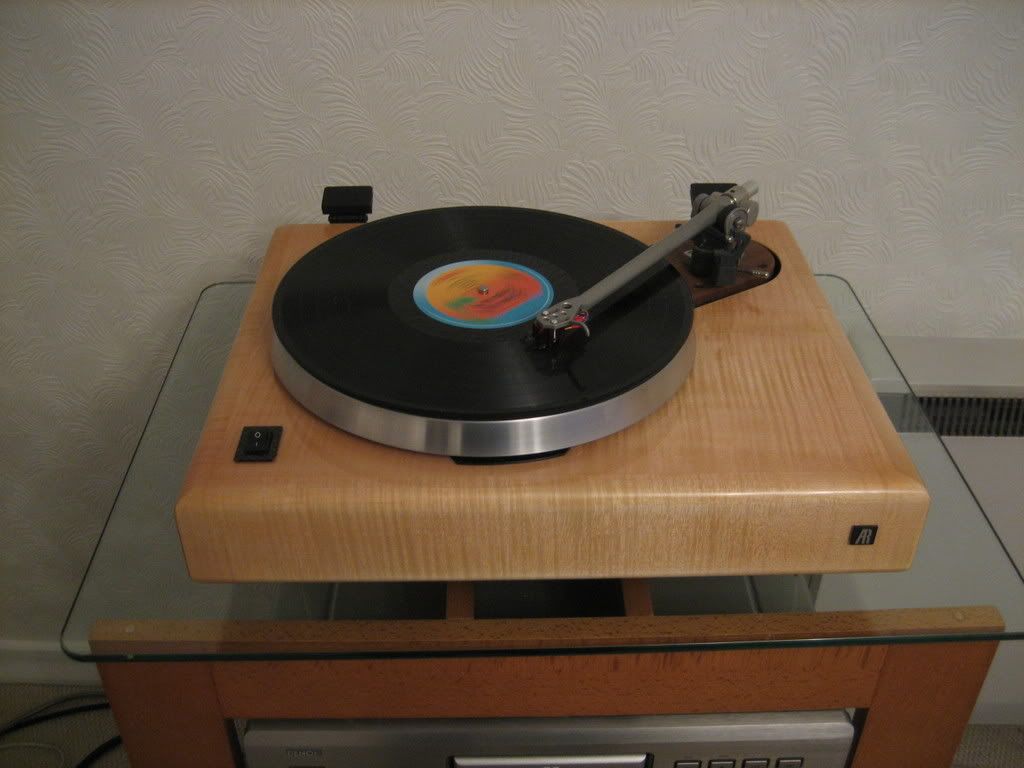 Looks great!
It has the look of a Gibson Les Paul
Those 'Tiger Stripes'
What colour/wood is it?
It looks like a maple-ly kind of colour with a hint of honey ... mmmm it is making my mouth water ! LoL
You could almost eat it !

I just love it, and I thought I could not like anything other than the redwood finish of the Revolver, but maybe .... mmmm haha

I bet it looks like gold in certain light.

That is quite stunning, Cable Monkey. Congratulations.
You must log in or register to reply here.

Rega planar 3 and beyond