Hope I'm posting this in the correct place - there are a number of possible forums I could post it in!

I'm attempting to set up a home cinema system with Sky Q and Xbox Series X as the main inputs and a Samsung QN95A and Sony VW570es as the outputs. I have most of it working well (via an AV Access Matrix switch and an HD Fury Arcana audio extractor - although that is not relevant for this question!) but can't get the Xbox to play nicely with the projector.

The problem: when wired directly to the VW570es (i.e. ignore the setup discussed above) the Xbox detects a 4K display supporting 60Hz but if I switch the output resolution to 4K it doesn't actually display anything and I then get a message saying 'there seems to be a problem displaying 4K'.

My question: does anyone out there use a Series X with a VW570es? Is there a setting that I'm missing somewhere that will get them to play nicely together in 4K?

My current thinking (for what it's worth):
In summary: I'm interested to know if anyone out there has the Series X working in 4K with the VW570es and, if so, what settings they use and whether they ran into similar issues!

Thanks in advance for any help - much appreciated.

PS For what it's worth I've been pleasantly surprised at how well the AV Access Switch + HD Fury Arcana works with controlling multiple inputs and outputs. Happy to discuss if anyone is interested!

I appreciate this might be a basic check you’ve already carried out… are you 100% sure and have verified that the HDMI cable you’re using is 18gbps capable?

CaroleBaskin said:
I appreciate this might be a basic check you’ve already carried out… are you 100% sure and have verified that the HDMI cable you’re using is 18gbps capable?
Click to expand...

This was my first thought too as the cables were installed by a contractor and I'm not 100% sure what they used... is there a way to test the throughput of the cable without buying a specific HDMI test kit?

That being said, I'm working under the assumption that since Sky Q works in UHD the cable should support 18 gbps... is that a false assumption? Does Sky output less data than the Series X?

I have a new cable arriving tomorrow that will provide the answer to this point for once and for all.

simongreid said:
This was my first thought too as the cables were installed by a contractor and I'm not 100% sure what they used... is there a way to test the throughput of the cable without buying a specific HDMI test kit?
Click to expand...

yep... xobxone X has a cable test built in... am sure the series X has the same ?


simongreid said:
That being said, I'm working under the assumption that since Sky Q works in UHD the cable should support 18 gbps... is that a false assumption? Does Sky output less data than the Series X?
Click to expand...

depending on length of cable there are certified cables you can buy and affordable priced...Premium certified, i wouldnt get anything without a QR code that can be verified with the hdmi.org app.
"Technology is a drug. We can't get enough of it."

I think it’s up to 40Gbps on the Series X. I’d place efforts on the cable until you know definitively otherwise.

OK thanks - very helpful. I will revert tomorrow when I've tested with a different cable.

Sky Q outputs 3840x2160 in 10bit colour using HLG, but only at 4:2:0 chroma (@50/60hz) so that will fit down an hdmi 1.4 bandwidth cable fine (10.2Gbps). The Xbox on the other hand will be trying to send 12bit 4:2:2 @60hz which needs a full 18Gbps capable cable and connected equipment.
Make sure your projectors hdmi ports are set to Enhanced Format and if that doesn't fix it, then it is highly likely your cable is the culprit.
An easy way to verify that, is to limit the Xbox to 30hz or below (if you can) and if it passes a picture then, it is definitely your cable.
Last edited: Sep 24, 2021

AVForums Sponsor
'when wired directly to the VW570es' - would suggest a cable issue.

'I have ordered a new HDMI 2.1 cable' - they don't exist, cables are either Certified or non certified which is different from HDMI Version numbers.

You don't say how long the cable from the kit to the Projector is - anything over 5m and you will want to consider a Fibre or Hybrid Fibre solution.

The HDFury Vertex²+Arcana work well as a pairing - likewise the upcoming Vertex³ (VRRoom) looks like a good option.

Many thanks for all the helpful advice on this. An update:
A couple of questions:
Joe - one follow up for you too - will I see a benefit from using the Vertex2 rather than the AV Access Switch given that the latter seems to work? I was tempted by the Vertex2 given how well the Arcana works but the difference in price put me off!

That’s good news. I guess you need to ask how disruptive the works will be and if you’re convinced there are zero issues with pushing 18gbps continuously for validation.

If convinced, will you be needing greater than 18gbps on any end display device in the next 5 years?

Can’t be too much help on the socket front I’m afraid. I’ve always avoided face plates and hdmi couplers due to the issues you describe. Simple brush plate works well for my HDMI exit point.

simongreid said:
Many thanks for all the helpful advice on this. An update:
A couple of questions:
Joe - one follow up for you too - will I see a benefit from using the Vertex2 rather than the AV Access Switch given that the latter seems to work? I was tempted by the Vertex2 given how well the Arcana works but the difference in price put me off!
Click to expand...

Yes, it is plausible the socket was the issue. My advice is to put the highest quality cable you can in the wall with the highest capacity, so you don't have to dig it out again in the future.

The Vertex 2 also gives you the very handy side effect that it facilitates DV (LLDV) viewing on the projector.
I can vouch for how well that works personally.

AVForums Sponsor
'Is it plausible that the socket was causing the issue? I had assumed it was a straight passthrough' - as DB9S suggests yes very plausible that simply inserting the addition two connections points into teh signal path can cause an issue, like others we tend to avoid terminated HDMI plates where possible.

'Am I OK to stick with the 'builder's cable' given that it appears to work' - Yes and simply ensure whatever cable you install can be easily replaced without major disruption at a later date.

'will I see a benefit from using the Vertex2 rather than the AV Access Switch given that the latter seems to work?' - if the current switch is working and that is all you require then stick with it. As DB9S highlights there are additional features of the Vertex2 which you may wish to enable which will have a positive affect on your projected image.

Thanks for the continued responses - apologies, I hadn't realised there had been so many!

Posting a 'final' update in case it helps anyone else out.

In summary, the 'UHD' cable works at every resolution available on the Arcana (up to 4K60 444 8b LLDV), although the highest output signal I got to the projector was 4K60 420 10b HDR (I assume because the projector doesn't support anything higher than that?).

Both cables work when plugged directly into the Xbox (i.e. without the Arcana in the path) - I assume the Xbox is scaling the output appropriately for the cable? I'm not clever enough to work out what resolution / colour space the Xbox is outputting in both scenarios but I assume it's lower with the longer cable.

Interestingly (to me anyway), one of the faceplates appears to work with UHD signals whilst the other doesn't - despite being exactly the same device in principle. I take that as another warning to stay away from them!

Joe / DB9S - based on your comments above I can see a Vertex2 being ordered in the not too distant future! (Out of interest does this replicate the eARC feature of the Arcana? One of the reviews I saw suggested it does but it's not clear to me)

We will look to run new, higher bandwidth cables (that we have pre-tested!) if we can get the contractor to do it at a sensible price... we will see!

And a final word of warning: my contractor had originally wired up a different HDMI cable to one of the faceplates that they labelled as going to the projector. I had a PC hooked up to this (as an output) and plugging it into the AVAccess switch (also as an 'output') caused absolute chaos with the setup (dropped connections, etc) as well as making it look like one of the projector cables didn't work at all. Note to self: pay more attention to what the contractor is doing next time!

Make sure your hdmi ports are set to Enhanced Format on the projector to enable 4:2:2 12bit HDR.
See here for Vertex 2 info (earc is mentioned): 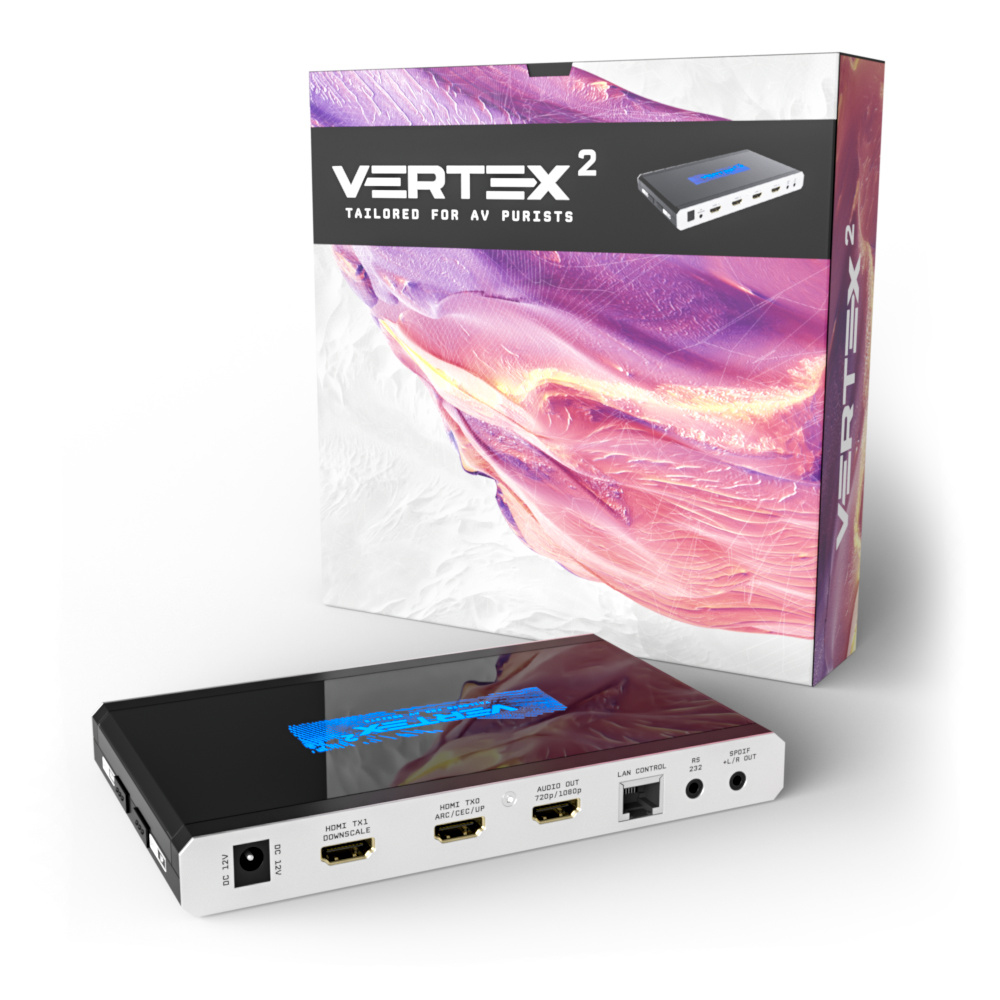 4K Vertex2 18Gbps | HDFury.com | Connect and Fix everything in HDMI

If you’re considering a Vertex2 at this time you may wish to look into the Vertex 3 (VRRoom) It’s due ‘soon’, although overkill currently in your setup it might not be too large a price differential and gives a bit of future proofing, if that’s of interest.

AVForums Sponsor
You can combine the HDFury Arcana + Vertex² (or Diva if you require HDR to SDR) and retain eARC/ARC capabilities - see diagram.

As CaroleBaskin suggest the Vertex³ (VRRoom) is also an option (available to pre order) if you require Features the Vertex² does not support.

It’s relatively cheap to test to see if it’s the cable but my gut feeling is it’s a cable issue, if you order from Amazon an optical HDMI cable you have a return refund policy is doesn’t fix your problem.

Luminated’s home cinema room
Movie Image Collection
You must log in or register to reply here.