Set up my 75" 95T earlier. And immediately noticed some issues once in situ.

Having looked at a few other posts this looks to be a known 'issue' that's due to the layered film technology Samsung use on the screen of the 90T / 95T to prevent ambient reflection, but imho gives an effect thats MUCH more distracting and therefore worse.

Really weird as when you look around the room, there are no light rays or anything like that, but this TV is SO sensitive at picking things up, i've never seen anything like it before.... I've put some photos below, take a look and tell me what you think? (i've done some photos of my LG B8 as well as a comparison of what I'd consider 'normal') 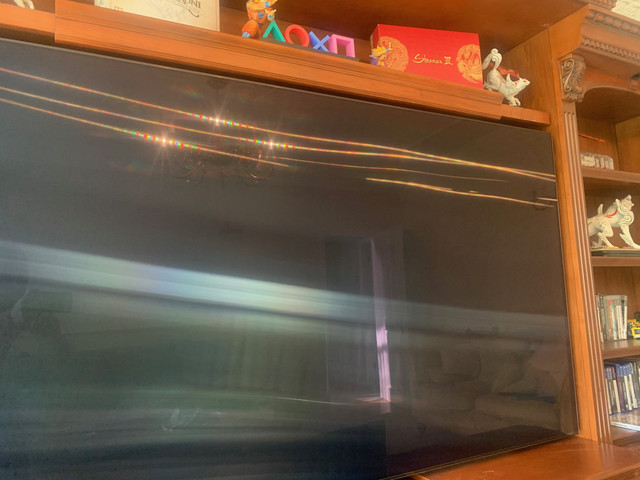 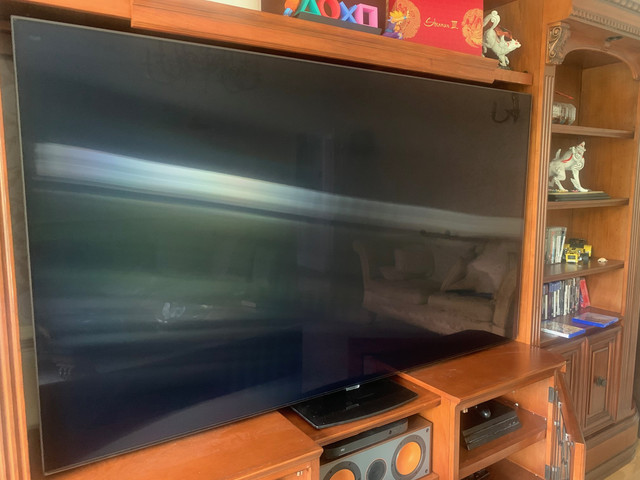 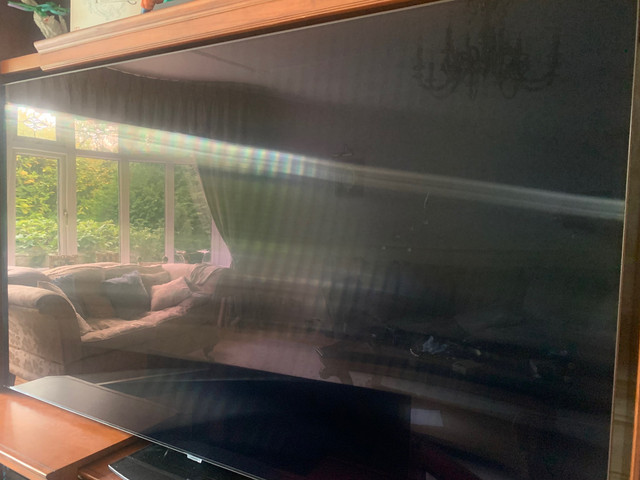 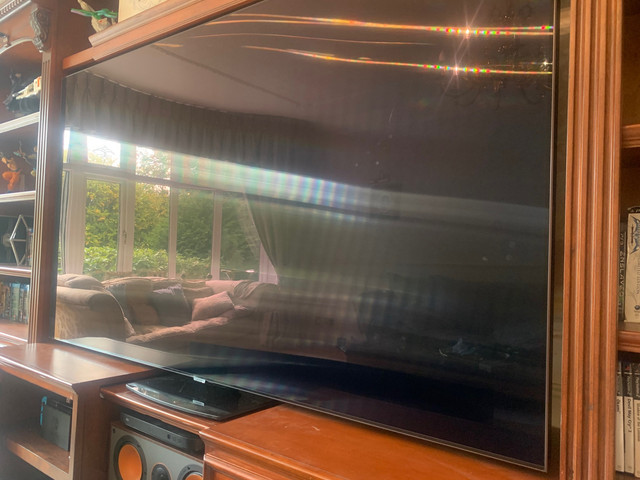 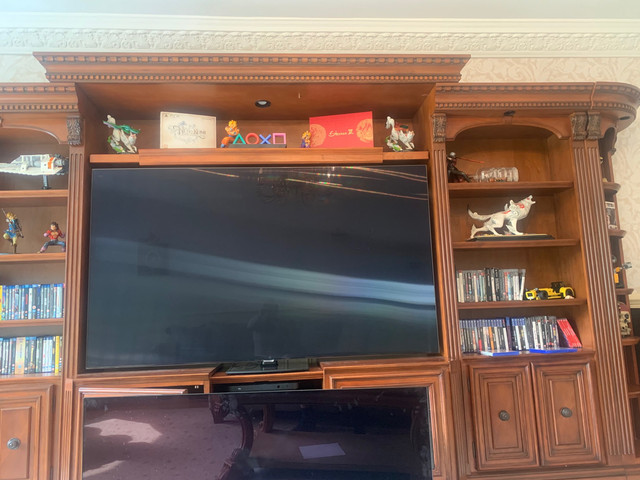 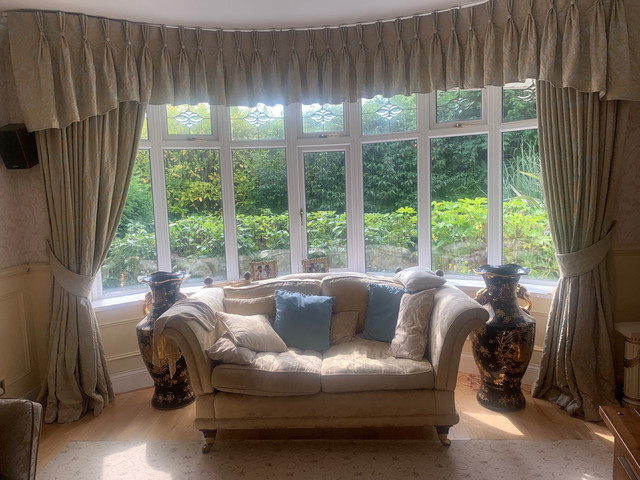 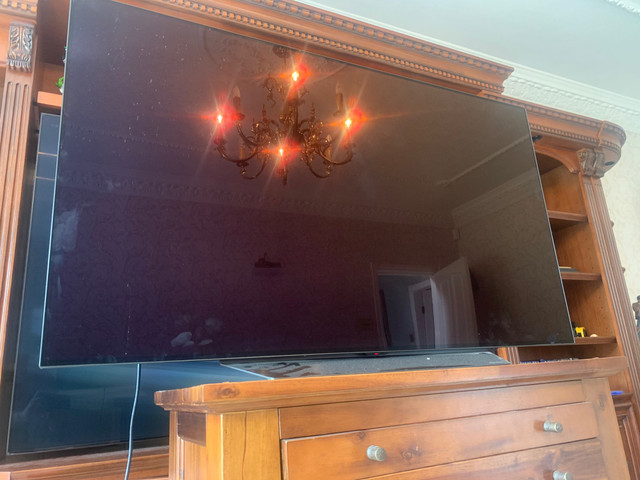 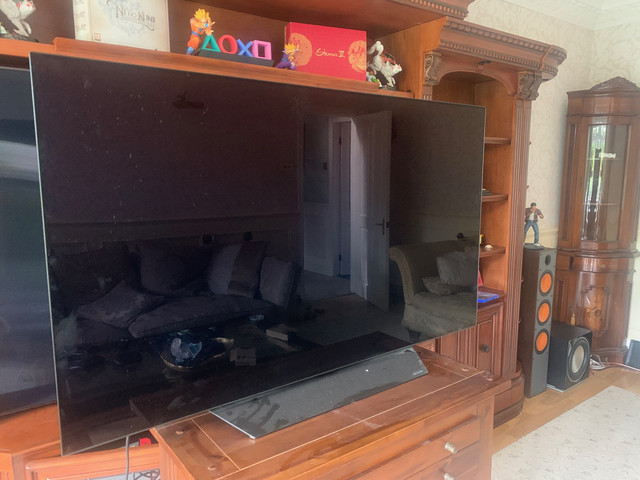 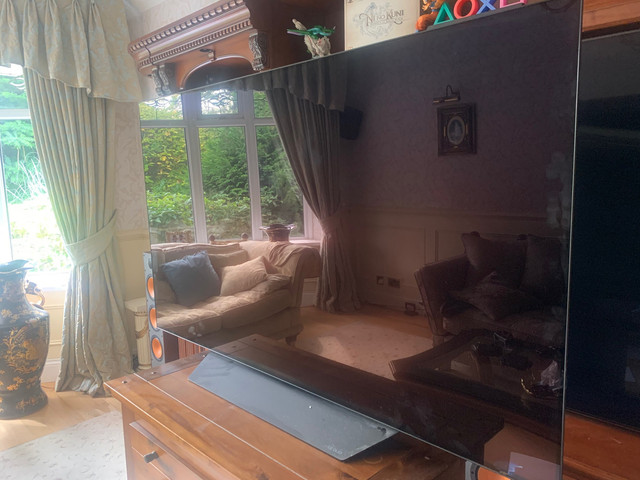 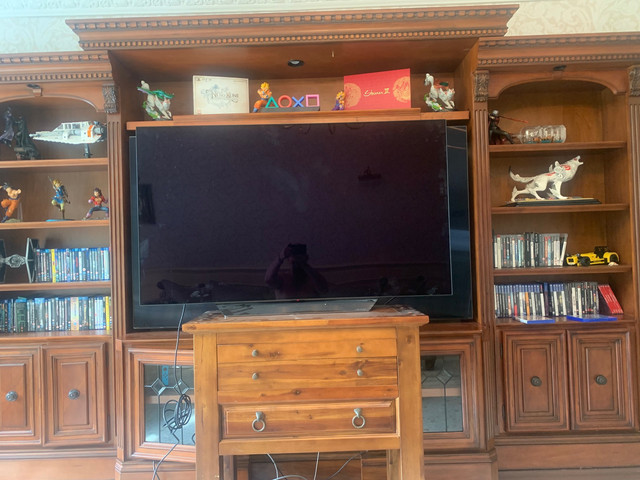 Am I missing something really obvious here? If not then i'm actually appalled by how this hasn't been picked up in Sammys Q&A, it makes the screen in my room completely unwatchable, £4,000 for a TV to have issues like this?....especially poor as this is a TV that's MARKETED to be used in LIGHT ROOMS! aye good luck.

Posting on here on the off-chance that everything i've read is wrong, i'm being a moron and there's an way to fix this before I return it?

I had the Q95T for two days before it was picked up by Samsung because of screen uniformity issues.

My experience was that the TV was really good at reducing reflections. The smear type reflection looks a bit jarring at first, but I think it is better than a regular hard reflection. With a completely glossy mirror-like screen, you get a hard bright reflection in one spot. The Samsung TV spreads the reflection over a larger area, so a bigger part of the screen is affected, but the reflection appears weaker, making it easier for the TV image to punch through it. I bought a Panasonic GZ950 OLED earlier this year, and I ended up returning it because it was just too reflective for daytime viewing in our living room. The Q95T is leaps and bounds better in this regard.

That said, I agree that the anti-reflective coating is better at combatting reflections of the averall ambient lighting than sharp and bright light sources such as the unshielded light bulbs in your ceiling lamp. No matter what TV you get, you really should try to position it so that you don't get reflections like that. But I realize that's not always practical.
Last edited: Sep 19, 2020

Thanks, yeah mine has DSE too. Quite bad when watching sports. Alone I was gonna live with it but combined this is just too much for me to be ok with.

glad in a way to know im not being an idiot and this is a real issue.

Point noted about its reflection handling being better then the Pana, but again in the photos above; the LG doesn’t suffer from anything like this, totally night and day. The QLED light scattering would make sense if the sun was shining at the tv through the window but it isnt. Just shining into the room on a fairly dull day tbh. My feeling is that the anti reflective is just not effective in my setup, it’s too sensitive and making a mountain out of a molehill

It’s a shame that the 77 CX is another £1,000 dearer and tbh I generally prefer the colours for gaming on the QLEDs. Not to mention not worrying about burn in.

So little reluctant to pay more with their caveats. Hence having a think about the 80T as an alternative. It looks like they don’t have the anti reflective feature, Though heard they’re bad for DSE, what did you trade your 95T for?

it is annoying that all these flag ships have unique and noticeable issues. Hmph!

Would you be able to take a picture showing the amount of DSE or banding on your TV? Interested to know if others have the same amount as mine.

Yeah - sure, on mine it’s localised to the right side of the screen. Noticeable when all the screen is one colour or when watching sports.

Well, they took it in to be examined in a "controlled environment". it remains to be seen if they agree that it is unacceptable or "within spec".

Within your 28 days of ownership?

I never had any issues like this with my Q90R I wish I’d kept it now. Then again I can’t recall if it had HDMI 2.1 so maybe rose tinted glasses here
C

The anti reflective screen on my q90r is a brilliant idea from samsung. Perhaps it's not suited to all environments but it it streets ahead of other manufacturers and never an issue.

All lcd screens tend to suffer from dse and some, like mine, are not noticable. Some have been able to dial it out with the settings, or even give the screen a light 'massage'.
Samsung QE65Q90R , Samsung UE32T5300, Xbox Series X, SkyQ HDR, Sky Superfast. Samsung HW-Q900A Soundbar. SW-9500S Rear Speakers. LG C1 48" OLED.

cuke2u said:
The anti reflective screen on my q90r is a brilliant idea from samsung. Perhaps it's not suited to all environments but it it streets ahead of other manufacturers and never an issue...
Click to expand...

Can you take a photo of it reflecting a brightly lit room ?
I don’t recall my 90R looking as bad as my T does in the photos above. What do you think? Is your R as blatant as that? Very distracting I noticed literally within 2 minutes it use. Poor.
C

I have two windows and a set of patio doors in the room the tv is situated, so I would say it is a reasonably bright room. But mine doesn't suffer from reflections as bad as my previous sets did. If the tv had a screen protector on it when you unpacked it I am assuming you removed it?
Samsung QE65Q90R , Samsung UE32T5300, Xbox Series X, SkyQ HDR, Sky Superfast. Samsung HW-Q900A Soundbar. SW-9500S Rear Speakers. LG C1 48" OLED.

parmageddon said:
Within your 28 days of ownership?
Click to expand...

Not sure what you mean by 28 days of ownership. I had it for 2 days, and the store has a 60 day free returns policy. I could of course have returned it outright, but I got an insanely good price on it (40% off, celebrating the store's 40 year anniversary), so I didn't want to do that, as I wouldn't be able to get such a deal again. Anyway, the store (Hifi-klubben in Norway) has promised to replace it no matter what Samsung/the service center concludes, as they obviously agreed it didn't look good. Fantastic service from those guys!

The glare and reflection is SO bad, I can't believe it's as bad for other people.

Did anyone get a chance to take a photo of their 95T for me? I need a comparison really as not sure whether the issues im seeing are just with my TV or its the same for everyone.

Couple more photos of it below "trying" to refract light and doing a terrible job. Unbearable.


Shining a light directly at it. 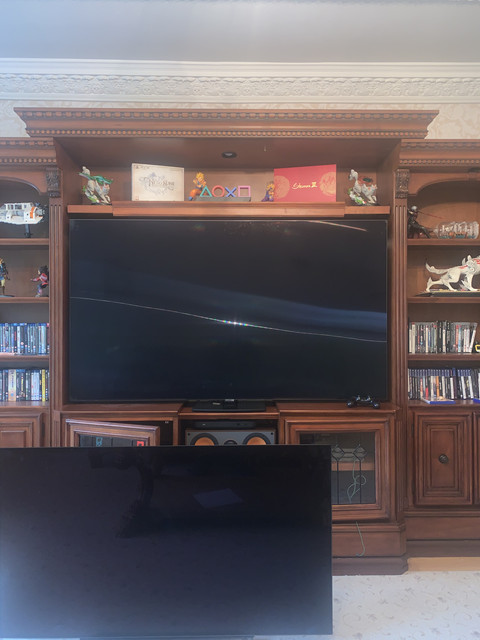 Ambient room light on a dull, overcast day in the UK 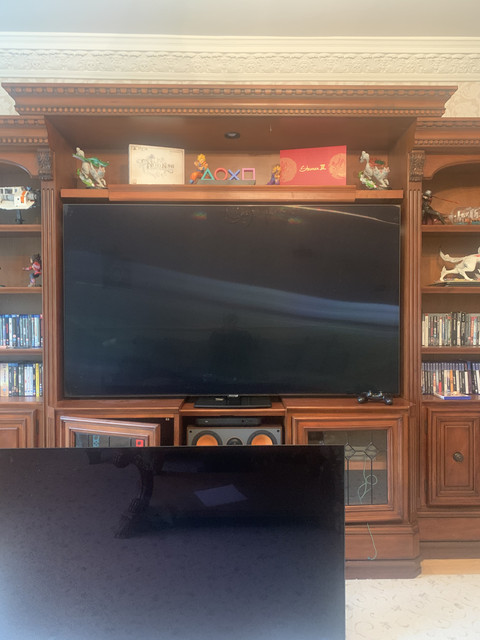 Sadly I can't give you a comparison picture, since I don't have the TV anymore, but judging from your pictures, it looked the same on mine. I just didn't have a problem with it. The reflections were far less noticeable than on my old Sony, which has a semi-gloss screen.

Really not what I expected, to the point where i'm semi convinced it still has another layer of peelable protective coating on there (took the original off when I took the two white protection pillars off).

If not resolvable I think it's going to have to be swapped for a CX or maybe downgrade to the 80T instead.

If you put the Q95T and LG B8 next to each other, playing the same video (by connecting to the same source or just starting the same video on both simultaneously), can you honestly say that the Q95T has worse reflections? If possible, set the B8 on a table at approximately the same height as the Q95T, so you get roughly the same light sources reflecting off both of them.

But medium to darker scenes, you can see the higlights streaking across on the 95T. Again I want to point out this was not the case on the 90R.

I have a pretty sharp and bright light source above the coffee table, which sits directly between myself and the TV. When that light is on, it causes annoying reflections on my old TV and the Q95T (can't really say which is worse for sharp reflections like that, though they are different). So I turn that light off for anything but casual viewing, and I have a mind to raise the lamp higher towards the ceiling, so it will no longer reflect back to the viewing position. General ambient lighting is a problem for the old Sony TV, but not the Q95T.

Interesting that your Q90R was better. I guess it must be related to whatever tweaking Samsung has done to the viewing angle compensation film this year.
L

You get a similar effect on the new Sony XH95 but no where near as bad as that. It's the new filters manufacturers are using. Zero DSE on my XH95 though, I'm glad I decided against the Samsung.

Have you seen this:

In that comparison, I must admit the reflection does look worse on the Samsung TV. But again, that is a super bright light source shining directly at the TV, which behaves differently from light hitting the TV at other angles.
Last edited: Sep 23, 2020

I hadn't - thanks for sharing that. I think this is going to crop up more and more. Once I noticed it, total deal-breaker for me. Just left unsure as to whether some are better than others....and maybe I just got a bad one. As mine is worse than anything else i've seen so far.

Probably a stupid question, but has the protective film been removed?

Chop_Suey said:
Probably a stupid question, but has the protective film been removed?
Click to expand...

If it is a stupid question, then i'm stupid too, ha.

....When It arrived brand new, It had the left & right vertical, thick white plastic/adhesive backed screen protector strips on the screen, and beneath those was a protective transparent film. That's all removed, though I do continue to wonder if there's another layer on there that needs to come off some how too When I asked Samsung about this however, they said it's not the case.
You must log in or register to reply here.